I am outside on my front porch. The yellowed leaves are methodically falling from the black walnut in the yard, my breath is chalky visible in the recent cold snap, and lately I have been exploring the unpleasant nuances of the dark night of a soul – my own, to be exact. It is a strange passion we live out on this over-glorified orb of rock hurtling through space at some rate that I’m sure would astound me were I to know what it was. It is an odd series of days, I am realizing, when you question your own faith more than you question your own doubt. And, indeed, it is these nagging questions which have prompted me to share my thoughts on Andrew Peterson’s 2003 album, Love and Thunder. 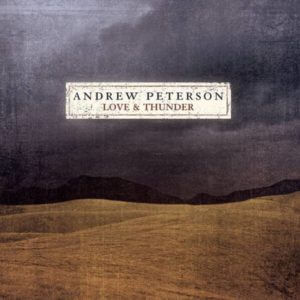 I credit Andrew for giving me a chance at a second career as a singer-songwriter in the floppy music business. In 1996 I toured with Caedmon’s Call while in my former duet, Ridgely. That was chance #1. I ambled off to pursue solo stuff in 1999 and made a less-than-stellar EP, More than Watchmen, that same year. It received no acclaim. For good reason. I made a follow-up full-length album, Land of the Living in 2001 and was having a terrible time making any headway. Late that year, I decided to commit the month of December to praying, as much silence as I could muster, and waiting; God would have to provide the shows and some dose of encouragement. If not, I’d take the career hint and move on. Probably not an exact, nor Biblical, depiction of the scene, but I trust you get the idea. I was at my parents’ house in Baton Rouge for the holidays and received a random phone call from Andrew one night. He had called to tell me he was enjoying LOTL and invited me to tour with him that spring as his opener. I was floored by the offer and quite thrilled. And certainly encouraged. There were many miles, many laughs and many late night Taco Bell meals on that tour with Andy, my wife, Ben Shive and Laura Story. In seeing Andy play every night there were also many lessons learned on how good performances don’t necessarily mean you have to be anyone other than yourself. It was a gilded prize for me and a lesson I have taken to heart and stage ever since.

So, why did Eric title this post, “Andrew Peterson: Love and Thunder”, when all he’s done so far is talk about himself? Because I want you to know, dear reader, why I like this album so much: I am richer for having been physically present when some of these songs were born “from the void of the wire and the wood”. I am humbled – sometimes a good thing, eh? – by the sheer grace and honesty of his words. I resonate with the album’s starkness and revel in its hope. I remember Andrew playing “Family Man” for us, his band, in a Wichita hotel room. I remember hearing “Silence of God” for the first time during a soundcheck. Andrew might remember things otherwise, but I have vividly fond memories from the tour all of which aided me in thinking and seeing better.

L&T is an album that is delicate in its haunting, beautiful in its sorrow, rich in questions, fertile in its proclamation of faith and doubt, and painstakingly glorious in its production. It is an album of songs that, no doubt, came from a dark night of Andrew’s own soul. And that, I suppose, is why I am drawn to write about it now. Misery enjoys company. No man or woman escapes this hurtling orb without suffering at the gates of pain, whether it is intense or minute, emotional or physical, faced head-on or avoided altogether. It is the condition of things as they are, but not as they one day shall be. I am grateful for the wisdom and insight of Andrew Peterson, as a friend, a songwriter and as a person who has possibly passed through the depths of earth (or hell) and returned a scarred, bruised and battered man, but all the more holy in his humanity.

*Of course, this very splendid album is available for purchase here in the Rabbit Room.*

Eric Peters, affectionately called "Pappy" by those who love him, is the grand old curmudgeon of the Rabbit Room. But his small stature and often quiet presence belie a giant talent. He's a songwriter of the first order, and a catalogue of great records bears witness to it. His last album, Birds of Relocation, blew minds and found its way onto “year’s best” lists all over the country. When he's not painting, trolling bookstores, or dabbling in photography, he's touring the country in support of his latest record, Far Side of the Sea.