The Primary Conundrum of Christian Living

The Problem of Pain by C.S. Lewis isn’t a comfort type book in the conventional sense, but it does provide an intellectual exploration of why a loving God might allow his children to suffer with pain, seemingly ignoring their prayers. Though it’s a more complex issue than I have the intellect to understand–to put it simply–what I’ve learned is that pain is for my own good.

This might be the biggest conundrum of Christian living, the idea that pain, as much as it hurts, is good for us. Several years ago, I made a list of some of the life events that brought me pain. In my forty plus years, it was the worst two year run of pain I’d ever experienced. Here’s the short list summary: dad died, grandma and grandpa died, mother was in the hospital three times for extended periods, a close friend was killed in a stock car race at age 38, brother injured badly in a fall, son in hospital twice with a serious illness, several expensive car breakdowns, aunt died after an extended hospital stay, great aunt died, a favorite cousin–my own age–died of a massive heart attack, home vandalized, my wife and I started primary care giving for my mother-in-law who developed and later died from vascular dementia, office relocation, won a business lawsuit, long-time business partner retired, and we refinanced our home.

That’s some pretty hefty pain and stress, deposited on the head of one person in a compressed period of time. I don’t mean to imply that I suffered through all of these events alone. Indeed, much of this pain was shared pain. Some may say simply that this is called life. Hey, those are things–to one extent or another–that have happened or will happen to everyone. Touche’. I agree. It just happened, however, that in my life maybe the statistics of living a charmed life prior to that, finally caught up with me. Rather than spreading these situations over many years, a wacked-out standard deviation placed these events in a relatively short period of time in my own life.

I had my share of angry moments. I sometimes behaved rebelliously, acting like a jerk or living as a natural man in some perverse way to “get back at God.” Many times I cried out to God, “Why me? Why another trial to bear? Haven’t I had my share of pain by now?”

“These are the times that try men’s souls.” Thomas Paine could have been talking about me.

Truly, I still don’t have a pat answer for why God allows still one more trial to follow after a man is already writhing on the ground in pain, spread eagle with his hands towards heaven, crying out for mercy. I just don’t have an answer.

What we do know is that God is sovereign and He is good. When doubts arise, I think it’s always helpful to look to what we know for sure about the character of God. We know he loves us and it is impossible for Him to behave towards us with anything outside of perfect love. By that, we can only assume and trust, if God gives us that ability, that he allows us to suffer great pain. He doesn’t provide the answer we seek in prayer because he has a higher purpose–maybe not so clear to us at the time–but very definitely for our own good. 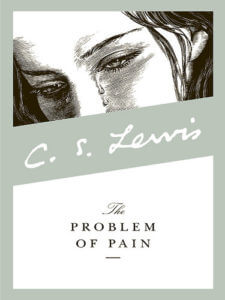 My natural tendency is to try to squirm out of life events that cause me pain. Of course, I also petition God to help me get rid of them. What’s absolutely bizarre–and I’m still learning this–is that I should probably be embracing pain. For it’s within life’s pain that I more often realize how much I need God. When things appear to be going “well,” it’s easy to have the illusion that I don’t need Him. When I have the sense that I can do it on my own, I too often ignore God. I think it’s one of Satan’s most cunning traps. He doesn’t care for it when we fearlessly trust and obey; resting in the knowledge that God is in control.

I’m perfectly willing to credit myself for blessings that have come from God. Retrospectively, I’ve become convinced that God allows major pain in my life because I’m slow to recognize his grace, so inclined to want to run the show myself, so rarely given to making His will my own. It’s not always correction (I’m getting into deeper theological territory than I belong here). More so, it’s a loving Father, nudging His son in the direction He knows is best.

I like this passage, James 1:2-4, which deals with joy and pain:

Consider it pure joy, my brothers, whenever you face trials of many kinds, because you know that the testing of your faith develops perseverance. Perseverance must finish its work so that you may be mature and complete, not lacking anything.

Through these periods in which God is silent, I have learned that my vision is often limited. With God’s omniscience and sovereignty, it’s a little humorous that I sometimes think that I know better. Oh, I would never express it that way, but sometimes I live that way. I’m learning that in allowing so much pain to enter my life, God is actually showing me how much He loves me. He wants me to learn and grow. He wants me to learn those things I’ve been slow to embrace.

So you have yourself your ninety nine
Isn’t that enough for you?
Still you followed me to the shadowed valley
Carried me on your shoulders too.

I’ve done the work of Sisyphus
Thinking that I could get over this hill
But the one thing I can’t get over now
Is the force of your will.

It’s true that during those times when grief surrounds us, clouding our vision, we must peer way deep inside of it, although every part of us wants to look away or run. I’ve learned–alas, I’m still learning–that joy isn’t some esoteric, hard to capture emotion–it’s a choice. It’s an act of my will, enabled by the grace of God. I can choose to be joyful.

So, what does it look like? For me, prayer has been helpful. In obedience, praising God for specific aspects of His character–that he knows and I don’t, that he loves me and wants the best for me–and to praise Him for loving me so much that he would allow these things. And that often produces the emotion that might be called happiness. But even if it doesn’t (and sometimes it doesn’t) I need to stand on God’s promises in spite of how I feel.