In less than two weeks, I’ll be out of a job, out of a home, and hundreds of miles from my nearest comfort zone. I resigned from a job I love, the best job I’ve ever had. I told the little old lady I rent from that I won’t be renewing the lease and I’ve written my last rent check. I sold everything but my pickup, my motorcycle, and a few boxes of books, tools, clothes, and sundries. If it doesn’t fit in the pickup, it’s not coming with me. I dismantled my unfinished sailboat and saw her bones thrown on the burn pile. That was the hardest part of the entire thing. The boat that I’d put so much sweat and work into was too big to come with me, too unfinished to sell. I nearly cried when I took the saw to her and cut her apart.

I wish I could say I had a concrete reason for having done these things but the truth is that I don’t. People ask me what I’m going to do and for the most part, I just wince and shrug, “Time for change.”

In one of Wendell Berry’s poems he says, “…every day do something that won’t compute.” This qualifies. A couple of months ago when I made the decision to move, I felt very strongly that I was being led by God. It was the culmination of months of prayer. Today I feel like I’m standing at the top of a huge flight of steps and saying to God, “Next Friday I’m going to fling myself down these stairs. You’d better catch me.” It feels like I’m daring God to let me break my neck.

The trouble is that I’m pretty sure God has every intention of letting me fall, break my neck, and lay on the floor dying while I wonder what I was thinking. I expect to be hungry a lot. I expect anxiety over where the rent money is going to come from. I expect to have to take jobs I hate because they pay the bills. I expect a lot of things that won’t be enjoyable. But I also expect resurrection.

The last line of that poem says, “Practice resurrection.” That phrase has been with me a lot these past days and next week when I drive away from everything that makes me comfortable, it’ll be with me then. I’ve had plenty of practice in the past. I wish I could say I was getting better, or that it was getting easier, but each time I’ve flung myself down those steps it’s been a brief moment of flight followed by a bone-snapping crash. It hurts to die but each time I’m raised again and I’m something new, something I don’t recognize, something I never expected. I’ve gotten no better at avoiding the pain, but maybe, just maybe I’m getting better at trusting in the coming resurrection.

When I get where I’m going, I look forward to laying out that sailboat again. I learned a lot the first time through. I’ve honed my skills and I have my tools. I trust in the blueprints and I understand them better this time around. Though she’ll be the same, she’ll be cut from new wood. She’ll be finer than she was before and built by surer hands. There will be new problems to overcome, more blistered hands and cut fingers but one day, when I’ve bled for her enough, she’ll sail. 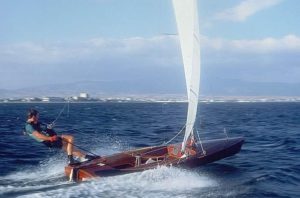 Love the quick profit, the annual raise,
vacation with pay. Want more
of everything ready-made. Be afraid
to know your neighbors and to die.
And you will have a window in your head.
Not even your future will be a mystery
any more. Your mind will be punched in a card
and shut away in a little drawer.
When they want you to buy something
they will call you. When they want you
to die for profit they will let you know.

So, friends, every day do something
that won’t compute. Love the Lord.
Love the world. Work for nothing.
Take all that you have and be poor.
Love someone who does not deserve it.
Denounce the government and embrace
the flag. Hope to live in that free
republic for which it stands.
Give your approval to all you cannot
understand. Praise ignorance, for what man
has not encountered he has not destroyed.

Ask the questions that have no answers.
Invest in the millennium. Plant sequoias.
Say that your main crop is the forest
that you did not plant,
that you will not live to harvest.
Say that the leaves are harvested
when they have rotted into the mold.
Call that profit. Prophesy such returns.

Put your faith in the two inches of humus
that will build under the trees
every thousand years.
Listen to carrion – put your ear
close, and hear the faint chattering
of the songs that are to come.
Expect the end of the world. Laugh.
Laughter is immeasurable. Be joyful
though you have considered all the facts.
So long as women do not go cheap
for power, please women more than men.
Ask yourself: Will this satisfy
a woman satisfied to bear a child?
Will this disturb the sleep
of a woman near to giving birth?

Go with your love to the fields.
Lie down in the shade. Rest your head
in her lap. Swear allegiance
to what is nighest your thoughts.
As soon as the generals and the politicos
can predict the motions of your mind,
lose it. Leave it as a sign
to mark the false trail, the way
you didn’t go. Be like the fox
who makes more tracks than necessary,
some in the wrong direction.
Practice resurrection.