Okay, seeing as how we have had posts here on the Rabbit Room about westerns, vampires, rock stars, chimps, Michigan, fame, banjo players, apples, poetry, and who knows what else, I figured it was high time for a post about classical music. 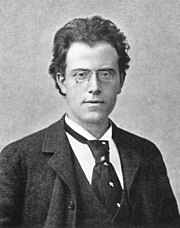 Kicking off their 2009 concert series earlier this year, the Nashville Symphony performed Gustav Mahler’s Sixth symphony (and being the Mahler freak that I am, I attended all three performances). Mahler wrote nine symphonies in all – and started a tenth before he died – and after hearing them, it becomes difficult to try to put his genius into words. Of course, one could say that one reason art exists at all, the reason we have symphonies and paintings and jazz and dance, is to express that which we cannot put into words. So maybe it is better to say the same thing about the creators – the sub-creators, as C.S. Lewis called them – and not try to reduce their work to the written word. Still, at times, we search for ways to describe to others the effect art has on us, to explain, to ourselves as much as to our friends, why we were so moved, why we found tears in our eyes or felt our deepest secrets were laid out in the open or saw laid out before us the way we should go.

So as a starting point, I would use the word epic to try to describe Mahler’s symphonies. At the performance I saw there were one hundred and eight players on stage, and the piece is almost eighty minutes long. Compare that to another piece on the same program that evening, Haydn’s “Fire” symphony, for which thirty-two players were required and lasted a brief seventeen minutes. The sixth symphony is sometimes called the Tragic Symphony, a title Mahler himself attached and then later removed, desiring the work to be experienced on the basis of the music itself, without the aid of a program. The concluding paragraph from the program notes that night offer a concise summary of Mahler’s work. “Mahler excelled at plumbing the depths of tragedy, in part because the tragedy is not unrelieved. Even in this, his most tragic work, he presents love, nostalgia, serenity and ecstatic vision, which is what makes the tragedy so excruciating when it is all subsumed by the hopelessness of the conclusion.”

The ending evoked the same visceral reaction in me as did the ending of one of the best films of 2007, No Country for Old Men. I have argued – and will continue to do so – that No Country for Old Men ends on a hopeful note. An uncertain note, yes, but still a hopeful one. Mahler ends his sixth symphony on what could easily be called a nihilistic note, which makes the beauty and peace of the ending of his ninth and final symphony so breathtaking. (Warning: I am now stepping fully into music nerd territory.) All throughout the piece, over and over again, you hear an A major triad, held for two bars, changing to an A minor triad – hope and despair, if you will. Sometimes the A major to A minor chord is played by the full orchestra, and other times it is providing a foundation for a melody played over it, always changing from major to minor, major to minor. But then, in the last minutes of the piece, we hear only the A minor chord. The presence of hope, the major chord, is gone. And the ending, a strong fortissimo with everyone in the orchestra playing the A minor triad, quickly dying away under a timpani cadence to a final string pizzicato on a soft unison ‘A,’ is devastating.

As I was reflecting on the despair of the final bars of the piece, Psalm 88 came to mind. Quick Hebrew lesson (with thanks to my friend Michael Card for this information): We’re all familiar with the Psalms where the author cries out against God, demanding to know what on earth He is doing. The questions that most of us find ourselves asking, at some point in our lives, are there expressed: Why does evil exist, why do the wicked prosper, why am I oppressed, where is God, and on and on our questions go. All of these Psalms, Mike told the small Bible study he was leading, have the “vav adversative,” usually translated “and” or “but,” somewhere in the Psalms. For example, in Psalm 73, after reading the psalmist’s complaints, we find, “but then I entered the sanctuary of God,” and, “saw the whole picture.” The one thing they all have in common is that the “vav adversative” does not appear in the same place. Sometimes we see it at the front, sometimes in the middle of the psalm, and sometimes not until the very end. But they all have it. All, that is, except Psalm 88. Psalm 88 starts out with a plea to God for salvation, saying, “God, you’re my last chance of the day.” After a heart-rending cry for help – “I’m written off for a lost cause,” “You’ve dropped me into a bottomless pit… I’m battered senseless by Your rage,” “Why, God, do you turn a deaf ear?” – the psalm ends with a soul-rending cry of despair, “The only friend I have left is darkness.” No resolution, no hope, no rest. Only darkness. Only despair.

I’ll end this with a song featuring Andy Osenga, Jeremy Casella, and Sandra McCracken, written by Jeremy, based on The Message’s rendering of Psalm 88, “Last Chance.” And next time you have an hour and half to immerse yourself in the listening experience, check out Mahler’s 6th on iTunes. If you have a chance to hear it live? Do whatever it takes to get there.