Neil Gaiman’s work is not going to be for everyone. Let me just say that up front. But I’ve now read Coraline, The Graveyard Book, and I’m halfway through Stardust, and I can tell you there are fantastic moments of Recovery to be found in his work. And when I’m escaping into fantastic literature, I want recovery. 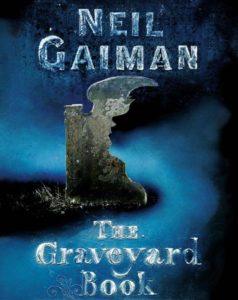 The Graveyard Book is a great coming-of-age tale set in a very Gothic and unfamiliar world: the world of ghosts in a graveyard. Without giving away too much of the plot: due to a series of circumstances, the infant Nobody Owens ends up being hidden by ghosts in a graveyard to keep him safe, and he’s raised among ghosts and becomes a young boy who can walk the border between death and life.

I’ll give you, by way of a teaser, two moments of Recovery – of “regaining a clear view” of our own world by visiting another in story – to tempt you to read this excellent work.

Nobody (Bod for short) is speaking with his guardian, Silas, about the unconsecrated ground in the cemetery – the little overgrown plot of land where the suicides and witches were buried. When Silas explains that many suicides are just trying to find a way to be happy, Bod asks if it works: if they are happier in death than they were in life. Silas responds:

“Sometimes. Mostly, no. It’s like the people who believe they’ll be happy if they go and live somewhere else, but who learn it doesn’t work that way. Wherever you go, you take yourself with you. If you see what I mean.”

Those of us who believe in a Fall – that we are the problem that needs a Remedy – know precisely what Silas means (whether Gaiman intended that or not!).

Later, Bod is struggling with why one of his friends would want to forget him. Bod, of course, is not a regular human – he can see and talk with the dead, and do things that only ghosts can do. Silas responds, again very wisely:

“People want to forget the impossible. It makes their world safer.”

This reminded me of the moment in Madeleine L’Engle’s A Wind in the Door, when the cherubim Progo explains why people usually can’t see him: “Humans can bear very little reality.”

These two Recovery moments are combined in my mind: We can bear very little reality, and we want to forget the impossible, because we know there’s a big problem with the world and that we’re a part of it. But the great, seemingly impossible truth is that there is an Answer that does not lead to despair.

The Graveyard Book is not Christian fiction, and as I said at the beginning, not all Christians will be a big fan of Gaiman’s work; but this book–winner of the 2009 Newberrry medal–is worth your time, because the Christian heart and mind will find Truth in its pages.