A poetic, hard, empathizing look at a rugged community in the Ozarks, where almost everyone you know is related in some way, and meth–cooking it, distributing it, and using it–surrounds you.

In “Lonesomeness and Community,” the second chapter of Rodney Clapp’s excellent book, Johnny Cash and the Great American Contradiction, he writes about Emma Bell Miles (1879-1919), who lived in Walden Ridge, near Chattanooga, TN, my hometown. Growing up in the Appalachians, among “quintessential hillbillies,” her parents–who were educators–reared her as a cultivated woman, and were against her marriage at a young age to “a native hillbilly.” For the rest of her life, she straddled the two worlds, living among her husband’s people on one hand, and yet making regular visits to her wealthy and cultured friends in Chattanooga. She wrote essays about her surroundings and friends, published in magazines such as Harper’s Monthly, and in books–The Spirit of the Mountains was published in 1905–that contained moving, compassionate, and insightful glimpses into her world.

Clapp, describing her work, writes: “Miles recognized that the “luxuries” of the hill folk were “all romances,” and included “music, whiskey, firelight, religion, and fighting.” …Noting that her Appalachian neighbors had no theaters, bullfights, or sports arenas, Miles said of music that “it is their one emotional outlet.” Commenting on the nasally, high-lonesome vocalization of the mountain singer, she remarked that “the oddly changing keys, the endings that leave the ear in expectation of something to follow, the quavers and falsettos, become in recurrence a haunting hint of the spirit-world; neither beneficent nor maleficent, neither devil nor angel – something not to be understood, yet to be certainly apprehended.” Hillbillies, if I may respectfully resort to that term, did not theologize very explicitly, corralling spiritual realities or perceptions into systematized categories and giving them Latinate names. Nor did they complain, not in general, and certainly not about their lonesomeness in particular. But in their music they felt free to acknowledge loneliness and other pains, even to weep openly in the company of others. Loneliness is admitted and alleviated in church, where preaching and especially singing express grief and separation and long-felt agony in a way not otherwise noted in the stoic mountaineer’s life. Here is Miles at church, singing along and looking about:

“Tears are running down seamed and withered faces now, as the repression and loneliness of many months finds relief; the tune changes again, and yet again – they do not tire of this… [In these songs about meeting deceased fathers and mothers in heaven, the singers anticipate] Broken ties restored, old pain of lonely nights to be no more – that is the dearest promise of this religion; the aching of old grief suddenly caught up and whirled away in this aroused hope of glory. ‘By-and-by we’ll go and see them…’ Did ever Israel captive peer into the future any more wistfully than these?” 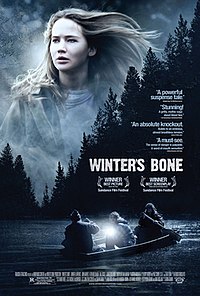 So what does any of this have to do with Winter’s Bone, the new movie from writer/director Debra Granik? Maybe not much, but for me, it provided a context for the part of the movie that left me stunned, sitting speechless in my seat for several minutes after everyone else had left the theatre… but let me back up for a minute.

Winter’s Bone is based on Daniel Woodrell’s 2006 novel of the same name. Set in the Ozarks, where Woodrell grew up, the story follows 17-year-old Ree Dolly (played by Jennifer Lawrence) as she tries to locate her father, who had recently been released from jail after posting bond, just before his court date to face charges of cooking meth. Ree finds out that her father has put up the house that she and the rest of her family live in and if he doesn’t show up for the trial, they will lose their home. With the family already riding the fine line between barely subsisting and having nothing at all, and with nothing to fall back on, Ree knows they won’t make it without the house.

Because Daniel Woodrell was writing about the culture he grew up in and lives in and because the movie adheres pretty closely to the book (I’ve heard), the story never strikes a false note. It was filmed on location in the Ozarks, and in fact, the little girl playing the younger sister of the main character actually lives in the house many of the scenes take place in. In the last act of the film, there were three or four times I was afraid the story would follow the path of a typical Hollywood film, offering some kind of easy resolution or contrived climax, but instead it went where the story needed to go. The ending itself is absolutely perfect.

But make no mistake, this is a dark film. Peering into the underbelly of an insular culture where the distrust of outsiders-even when they are family-is compounded by the secrecy surrounding a drug culture means that you won’t find a story filled with bright, sunny, fields and flying unicorns. It is hard not to see parallels between shots of cattle and the way women are treated in that culture, and it’s hard not to wonder where God is in a story like this. That’s not to say there aren’t moments of grace, though. At one point Ree offers up an incredible statement about the joy and the burden of love, telling her two younger siblings “I’d be lost without the weight of you two on my back.”

Flannery O’Connor, in a statement that seems like it could have been behind the making of this film, once wrote: “There is something in us, as storytellers and as listeners to stories, that demands the redemptive act, that demands that what falls at least be offered the chance to be restored. The reader of today looks for this motion, and rightly so, but what he has forgotten is the cost of it. His sense of evil is diluted or lacking altogether, and so he has forgotten the price of restoration. When he reads a novel, he wants either his sense tormented or his spirits raised. He wants to be transported, instantly, either to mock damnation or a mock innocence.”

Returning to my opening, here’s where I made the connection with Emma Bell Miles’ words about the role of music in the lives of her friends and family:  the first song that plays over the end credits is sung by Marideth Sisco, a woman who made an appearance earlier in the movie, at a “singing.” Here, at the conclusion of the story, the choice of songs is Farther Along, an old gospel tune that, in light of what I had just seen, overwhelmed me. It gave me a richer appreciation for the story, and reminded me again of the hope of the Gospel, the promise that, one day, all things will be made new.