Superman has the Fortress of Solitude. Batman has the Batcave. The Justice League has the Watchtower. Sherlock Holmes had 221b Baker Street. Bilbo had Bag End. Michael Card has Mole End.

It’s my pleasure to announce to you, ladies and germs, the Rabbit Room finally has official headquarters. Quarters for our head. A hutch. A lair. (Can good guys have lairs?) Monday morning I stood in the new office with Pete Peterson, Thomas McKenzie, Jason Gray, Russ Ramsey and our friend Josh Petersen (who was taking the picture) and gave thanks to God for the place.

What happens in a base of operations, you ask? Other than plotting to take over the world, it’s where we package and ship all the books, CDs, mugs, and Father Thomas bobblehead dolls. For years now, the base of operations has been in my manager’s basement. It’s been a good basement, as basements go, but even the best basement setup can’t compete with an actual above-ground office. Whoever filled orders had to step over boxes and hunch, not to mention the lack of sunlight makes one cranky (and pasty).

If we needed to do any webwork or planning or brainstorming or writing it tended to be in whatever coffee shop we could find. As many of you know, we tried for several months a while back to open a bookstore/coffeehouse, but realized that it’s impossible right now. In the meantime we’ve been looking for a happy medium, a place between the basement and a bricks-and-mortar Rabbit Room store.

Enter Ben Shive (a.k.a., one of my best compadres). Ben needed a bigger studio for all his production work. The Rabbit Room needed a lair. Yesterday I signed the lease on an office space that will house both. The Beehive (where Ben does his mad science) and the Rabbit Room will share a space right in the heart of Berry Hill, behind Baja Burrito and next to Sam & Zoe’s coffeehouse. It’s the neighborhood where our uber-talented friends Andrew Osenga, Mitch Dane, Shane Wilson, and a bunch of other great producers and musicians also work and play and eat burritos. It also happens to be about a five-minute drive from the Gullahorns, the Goodgames, the McKenzies, the Ramseys, and–well, you get the idea. It’s in a great spot. Ben will be making fine records in his part of the space and Pete will be in the other, working on things like Rabbit Room Store orders, the website, planning Hutchmoot 2011, and building Rabbit Room Press. (He’ll also probably write his next novel there.) 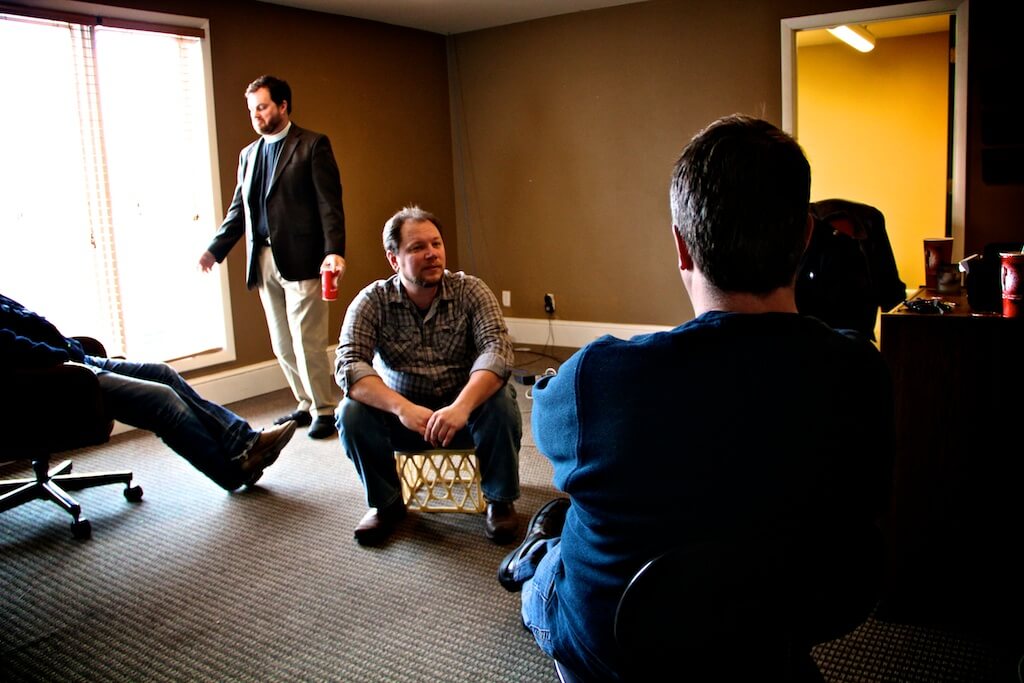 People have asked me what this will allow the Rabbit Room to do that it wasn’t already doing. It’s a good question, and I don’t really know the answer. It’ll be a much better place to fill orders. It’ll be a good place to meet and discuss the overtaking of the world with Rabbity goodness. This phase of the Rabbit Room’s growth won’t include retail sales, so you won’t be able to swing by just yet (though we encourage you to dine at Baja Burrito as often as you pass through town, since food will taste better in the vicinity of our lair).

The biggest thing for me is something I learned at Hutchmoot last year: there’s a big difference between existing online and existing in the real world. I don’t mean to overstate, but I think of it as a kind of incarnation. The thing takes on a new life. Years after this whole idea struck, I’m grateful to see it moving forward, building community, and shedding light.

Thank you, dear readers, listeners, and encouragers, for being a part of this story.

P.S. Shameless plea: If anyone lives in Nashville and has any cool furniture, we’re looking for some. You can see from the pictures that we don’t have much yet, besides the crate Pete’s sitting on. We humbly reserve the right to be picky, but if you have anything you’d like to donate (i.e., bookshelves, floor lamps, club chairs, love seat, coffee table, lava lamp, wooden desk, etc.), we’d be happy to take it off your hands. Shoot an email (and a picture of what you’ve got) to info@rabbitroom.com and we’ll let you know if it meets our impeccable standards.