A World Short on Masters

Have you ever looked at an actual Rembrandt? I mean really looked? I have. And it is exhausting. Why? Because Rembrandt was a master. If you are willing to look, he will show more than you can take in. This is what masters do.

The Dutch painter Rembrandt Harmenszoon van Rijn (1606-1669) is widely regarded as the greatest painter Europe has ever produced. Even while he was alive, people called him “the master.” Eager, rising artists would study under his watchful eye in his studio. They wanted to learn how to reproduce his technique and form. German art historian Wilhelm von Bode joked that the unintended consequence of this sort of mentorship was that “Rembrandt painted 700 pictures. Of these, 3,000 are still in existence.” 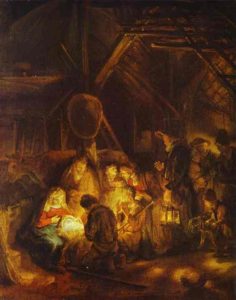 The Adoration of the Shepherds

Aside from his technical skill, Rembrandt was also a masterful visual storyteller. Every inch of a Rembrandt is filled with intentionality. His use of light to show you what matters (like the radiance coming out from the manger in The Adoration of the Shepherds) and his application of shadows to raise questions (like the dark figure in the upper left corner of his Return of the Prodigal Son) is often imitated, but never quite duplicated. His ability to capture furious motion a single frame (like in The Storm on the Sea of Galilee) plays like an optical illusion.

I’ll leave you to discover the great Dutch master on your own. For now, I want to focus on something Rembrandt said: “I can’t paint the way they want me to paint and they know that too. Of course you will say that I ought to be practical and ought to try and paint the way they want me to paint. Well, I will tell you a secret. I have tried and I have tried very hard, but I can’t do it. I just can’t do it!” 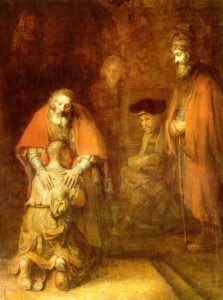 Return of the Prodigal Son

He was so incredibly gifted and for this history will never forget him. But when he tried to train his hands to create another man’s vision, he just couldn’t do it. Neither can I. Neither can you. He was destined to paint Rembrants and Rembrandts only.

He had to train his hands. He had to have started somewhere. It’s hard to imagine, but surely there once existed some pretty terrible Rembrandts. Early works. False starts. Work where he was clearly trying too hard. Too self-indulgent. Undisciplined. What’s not hard to imagine, however, is a solitary figure in a lamp-lit room mixing his oils, preening his brushes—thinking and painting and thinking and painting.

For what? For mastery. And why? For joy, because the mastery of something leads to a greater enjoyment of it. Singers, musicians, painters, writers, athletes, and artists of every sort know this. The harder we work at something, the more we are able to enjoy it. Rembrandt knew this too. He said, “Practice what you know, and it will help to make clear what now you do not know.” Annie Dillard said it another way: “Who will teach me to write? The page, the page, that eternal blankness.” 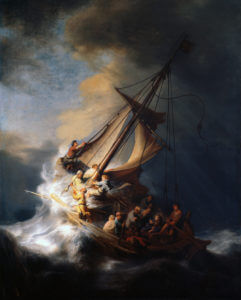 The Storm on the Sea of Galilee

All Rembrandt could do was paint and paint and paint. He couldn’t be a different painter. Only Rembrandt. And this is what he sought to master. For this he trained his hands.

When I stand before a Rembrandt, my senses come alive and I know I am in the presence of greatness. I am a fool if I don’t at least try to understand the joy that comes from mastery. I’m a fool if I don’t regard myself as his student in those moments when we’re in the room together. His slow patient work of mastering a skill brings me joy. How much more joy must it have brought him to not only stand in front of one of his paintings, as I have, but to then also know that he was the one who created it.

A couple hundred years after Rembrandt’s death, there came another student of the Dutch master, the poor and lovely Vincent van Gogh, who said, “Rembrandt is so deeply mysterious that he says things for which there are no words in any language. Rembrandt is truly called a magician… that is not an easy calling.”

Mastery doesn’t just produce stories. It considers how to tell them, and occasionally even provides new language when there are no words. The canvases Rembrandt left us do so much more than illustrate scenes. They are like the picture of the Dawn Treader that sucked the Pevensies and Eustace into an adventure whose goal was to reach the end of everything in the hopes that beauty would be all that remained.

What are you mastering? What are you practicing in order to make clear what you don’t yet know? If you’re anything like me, I’m sure you reach points where you begin to wonder if it might just be easier to plateau. And if not plateau, then quit altogether.

Don’t. Please. This world is short on masters, and consequently short on joy too.