The River Fox Chapter 3: The Caravan

Fantasy adventure and slapstick cartoon humor. Martin runs from dragons and bandits, while Marco tries to break out of a desert camp. The River Fox, volume two of The Dragon Lord Saga is now premiering one episode a week at Webtoons (also check out volume one, Martin & Marco). 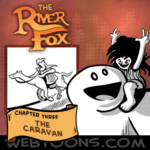 Well, here we are in the desert — which, if you’ll consult your map, is due south of Old Bill’s forest.

If The River Fox looks different than Martin and Marco, it’s at least partly because volume two is drawn digitally. Martin and Marco was pencilled, inked, and scanned, then tweaked and processed digitally before being printed. The new process is much more efficient! Here are the tools I’m using these days:

Manga Studio 4 – The best software to replicate that feel of pen on paper.

Yiynova MSP19u Tablet Monitor – A screen I can draw on. Almost as good as a Cintiq, and a heck of a lot cheaper!

Adobe Creative Cloud – Because EVERYTHING I do winds up in Photoshop before I’m though.

If you have any favorite drawing materials, I’d love to hear about them in the comments section below!

[Click here to read The River Fox at Webtoons.]