Art Stories: Dore’s The Burial of Sarah—An Epic in a Single Frame

Gustave Dore’ (1832-1883) was a French artist who worked mainly in etching and wood carving. During his life, he illustrated Lord Byron, Cervantes, Poe, Milton, Tennyson, and much of the Bible.

Dore’s etching of The Burial of Sarah is a great example of an entire narrative (Genesis 23) being told in a single frame. There are a lot of little things going on in this work that most certainly did not all happen at once—like sealing Sarah’s tomb as Abraham was led away. But this is what good artists do—they carefully arrange vignettes throughout the work which lead the viewer’s eye through the scene in a certain sequence. A well-ordered composition tells a story.

She bore her husband’s burdens as though they were her own, and Abraham loved her for it.

For those who know Abraham and Sarah’s story, this etching calls to mind more than her funeral. Written into the old man’s grief are reminders of when Abraham and Sarah when were young and brave—setting off from their home in search of the Land the Lord swore to give them. We remember her infertility and her deep desire to give her husband an heir. We remember how Sarah laughed at God when the angels visited them at Mamre and told Abraham that she would have a son within the year, though she was already 90. We remember how one year later Isaac was born.

And we remember that day some years later when Sarah watched as Abraham and Isaac rode off to Mt. Moriah—a knife in the old man’s saddle bag and wood for a sacrifice bundled on the back of the boy’s donkey.

Abraham spent his entire tenure as the first Patriarch unsettled. The heir to the Promised Land never owned so much as an acre until he bought the cave near Machpelah to bury Sarah, his beloved companion in faith and sojourn.

She was present in every memory and moment: Sarah, lovely and dignified, filled with passion and imagination. She bore her husband’s burdens as though they were her own, and Abraham loved her for it.

But now, this woman the Lord had renamed ‘Princess’ and then made into a queen, was gone. So Abraham went to some of the wealthy rulers in the land where she died, the Hittites, and negotiated to purchase a place to bury her.

And so it was, at last, that the Father of Nations took his first possession of the land the Lord swore to his descendants. It wasn’t a fertile valley or a palace or a vineyard. It was an interment site. There he buried the wife of his youth, his queen, his beloved Sarah.

There are nine distinct people in Dore’s etching, but his emotive composition leaves you feeling like there are only two—a dead woman and her grieving husband. The Burial of Sarah captures the last time Abraham would see his wife this side of eternity’s door, as they are each ushered into the worlds to which they belong – parted by death, if only for a season. Abraham and Sarah had walked a long road together. Dore’s single frame holds so much weight. 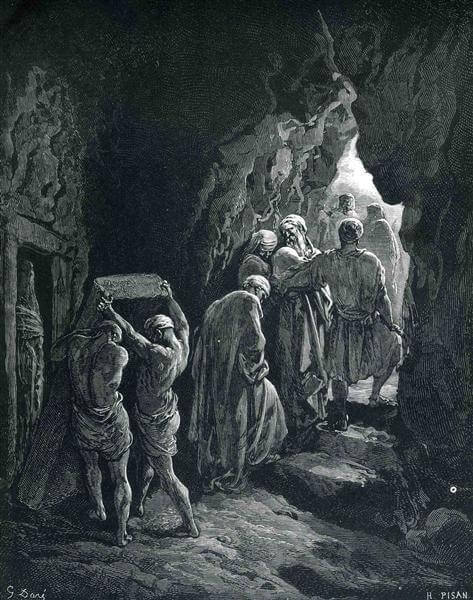 About the Art: Gustave Dore’, The Burial of Sarah, 1866, engraving, private collection.