Rembrandt painted the scene of Simeon blessing Jesus in the temple (Luke 2:21-35) twice, and the two paintings tell us as much about the artist himself as they do the subject matter.

The first, painted when Rembrandt was 25 years old, is a crisp, ornate scene with the temple itself presented as a character in the story (see below). Rembrandt’s characteristic illumination shines like a spotlight coming down from heaven, making Jesus the brightest figure in the scene. Simeon holds the child as he gazes up to heaven. Another attendant in the temple looks on, hands raised in praise. Nearly two dozen other figures line the background, looking on. Here young Rembrandt shows what he’s capable of. Your eye could spend an hour touring the canvas, and you still wouldn’t see all that’s there.

The second, painted thirty-eight years later in 1669, the year of Rembrandt’s death, is very different. Gone are the crowds looking on. Gone are the columns, and filigree, and architecture. Gone is the brilliant beam of light. The crisp brushwork of a steady young hand has given way to the shaky, mottled, impressions of the old master’s touch.

But old Rembrandt is content to deliver warmth over detail, individuals over a crowd, and simplicity over grandeur.

All the painter gives us is a picture of an old man at the end of his days seeing the Christ before his Maker calls him home. The old cleric smiles down on the child who looks back up at him. Simeon’s hands are pressed together in prayer. The third (and only other) figure in the painting is draped in shadow as a way of highlighting just how intimate this moment is between Simeon and the Messiah he’s holding.

The contrast of these two paintings is most certainly a commentary on Rembrandt’s own life. At 63, he is less concerned with impressing his audience. His humble world has focused in on Christ. The youthful Rembrandt’s Simeon, a masterpiece to be sure, puts on full display all the technique and ability he has mastered. If, at 25, he can already do this, imagine where he’ll be at 35.

But old Rembrandt is content to deliver warmth over detail, individuals over a crowd, and simplicity over grandeur. The ornate trappings of the temple are gone, and so are the crowds. All we see is an old man and his Lord.

Simeon is different in this painting because Rembrandt has changed.

Frederick Buechner, in his novel Godric, wrote, “An old man’s thoughts are long.” Simeon, perhaps, had been a show-off in his youth. We’re not told, though we do know what youth is like. But by the time Mary presents Jesus to him in the temple, he is an old cleric at the end of his run—weary, confident in his God, and alive with hope. In the year of his death, Rembrandt presents a man ready to take his leave, content that his life had led him to this moment he had longed for all those years.

Surely this is a commentary about the painter as much as it is about the priest. 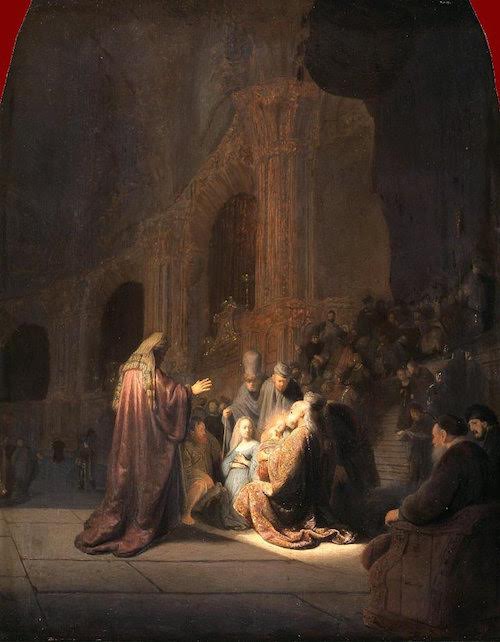 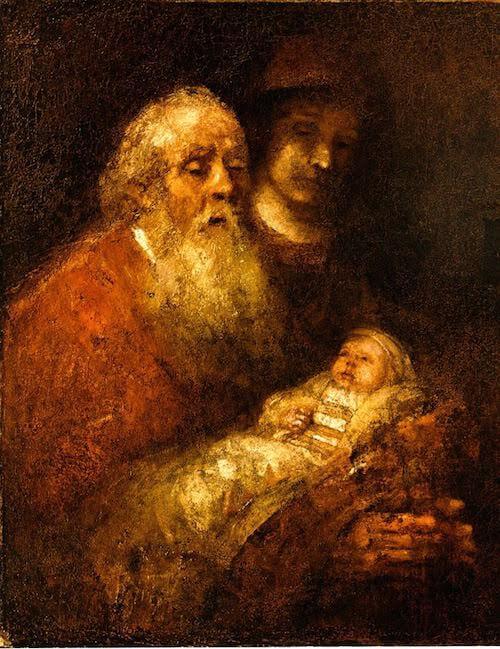