“Our brokenness has no other beauty but the beauty that comes from the compassion that surrounds it.” Henri Nouwen

Vincent van Gogh painted his interpretation of Eugene Delacroix’s The Good Samaritan while living in an insane asylum in St. Remy de Provence only months before he took his own life. During that period, Vincent would occasionally make his own versions of other people’s canvases. He interpreted two Delacroix’s – this one and The Pietà. Interestingly, both of the Delacroix’s Vincent copied involved broken people being held by those who loved them – one, a beat up traveller by a stranger and the other, the Savior of the world by his mother. 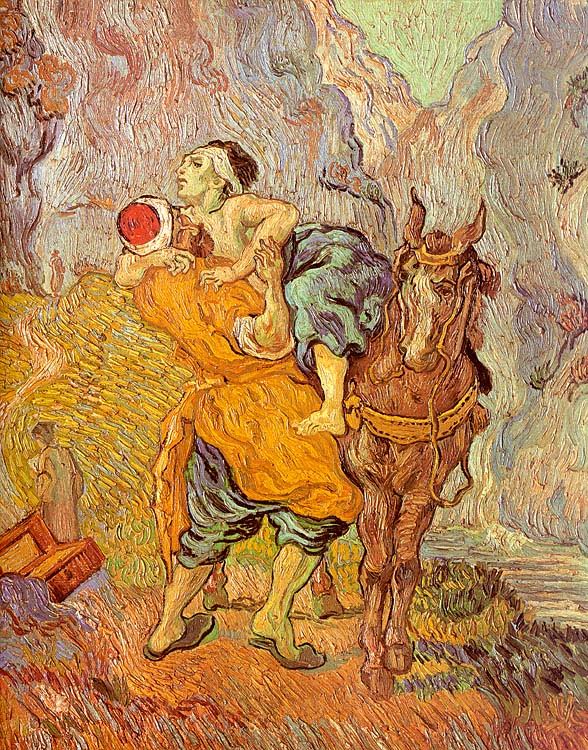 Due to his own psychological and social struggles, Vincent knew well what it was like to feel left “bleeding on the side of the road.” It is telling that perhaps one of the most commonly known details about Vincent Van Gogh, aside from his actual work, is that he cut off his ear in a fit of madness. That episode, and the season surrounding it, earned him the nickname “The Red-Headed Mad Man” from the people in his own community. We remember it still. It was during that season when Vincent painted The Good Samaritan.

When I see this painting, I imagine the artist sitting at the easel in his room in the asylum. I hear the tormented cries of Vincent’s fellow patients echoing down the stone and plaster halls. I imagine the painter studying the Delacroix and the page of Scripture from which it was drawn as he places the Pharisee and the teacher of the Law further on down the path, backs turned. I can see him mixing a touch of orange into the Samaritan’s beard, as he would often do to paint himself into his work. I imagine dozens of what would come to be some of the world’s most treasured canvases stacked and leaning against the walls of his room. It is such a lonely picture.

Several years ago, I went to see a traveling Van Gogh art exhibit when it came through my town. The exhibit was designed in such a way that we had to exit through the gift shop, which was filled with gag gifts poking fun at Vincent’s mania. There was a coffee mug with an ear for a handle, gummy ears, a plush doll with one ear attached by velcro, and so on. It was a terribly sad display of profiting from someone’s brilliance while simultaneously mocking their weakness.

The Gospel frees us from such ugliness. Christ does not celebrate our strength while mocking our weakness. He picks us up in our broken condition and lives to be strong for us.

Vincent wanted to be like the Samaritan—generous, compassionate, and joined to others in suffering. But he ended his life more like the wounded than the hero. As an artist, he spent his entire life being passed by. Vincent would not come to be revered as a painter until a few years after his death. The beautiful irony in this painting is how, all these years later, The Good Samaritan (and the rest of the art he produced) lifts up and cares for the beaten down artist. The tragedy is that he never knew.