What are we supposed to think about angelic visits?

In the Bible, we read that on occasion, angels would appear to people. Either these events really happened, or Scripture is deliberately trying to deceive us. How should a sensible person respond to a Biblical tale of an angelic visit? There are three ways a person could go, but only two are reasonable, and those two are mutually exclusive, meaning only one of them can be true.

Sandro Botticelli (1445-1510), an Italian painter from the early Renaissance period, painted his interpretation of one such visit. His paintings typically featured minimal architectural details while relying on flat colors and linear design to create a graceful, two-dimensional look. Perhaps his best-known work is The Birth of Venus.

Botticelli’s The Annunciation was created for the funeral chapel in the church of Cestello in Florence. On its gilded frame are these words in Latin from Luke’s Gospel, “The Holy Ghost shall come upon thee, and the power of the Highest shall overshadow thee” (Luke 1:35).

The Annunciation is the subject of countless paintings down through the ages because it represents that mysterious moment when the angel Gabriel appeared to tell an ordinary virgin that she was favored by God and would conceive of a Son who would be the Savior of the world, and that because of him the world would never be the same.

As I said, when we think about encounters between humans and heavenly beings, there are only three ways to view them, and only two are credible. The first is to conclude that these meetings are so implausible that they could not happen. This view would take one of two possible positions concerning the heavenly realm—it does not exist, or it does, but the separation between that world and ours is so vast and definite that it cannot be traversed.

The second and only other reasonable view is that for these celestial encounters to have transpired, they would have had to have been anything but normal—fantastic affairs you would have to see to believe. The laws of physics ignored by the presence of the non-physical. We would not expect these heavenly visitors to be constrained by natural laws as we, the earthbound, know them.

The third and only other remaining option, which is completely unreasonable, is that when earthbound creatures encountered heavenly beings it was no big deal—a regular collegial chat. This seems about as implausible as a man casually embracing a grizzly bear in the wild.

Botticelli took the second view. This meeting between the angel and the woman was a strange, sacred matter. Botticelli used visual cues to convey the idea that while a heavenly being drew near to the earthbound Mary, there remained a separation between them. Mary is rendered as a solid figure while portions of the angel are translucent. Also, a series of red tiles on the floor and the window create a visual barrier between them, as outside the window a river runs off past the horizon line, separating them even further.

Heaven drew near, but the two remained distinct. Perhaps Botticelli intended this separation to highlight the Biblical teaching that Mary conceived the Messiah without being touched. The woman and the angel regard each other as almost unsafe. The angel creeps toward the woman in a posture of submission as Mary, demure yet crowned with a halo, turns away from reading a book on a stand (presumably Scripture) to genuflect before her herald.

The Annunciation was painted over five hundred years ago. Consider how Botticelli used his composition elements to not only show us the encounter, but also to tell us about it. This painting offers more dissonance than harmony, more distance than familiarity, and more mystery than certainty. The artist who painted this scene came to his easel with more questions than answers, and that is why it helps us.

Botticelli’s answer is strangely satisfying to me: he doesn’t really know, but it happened. 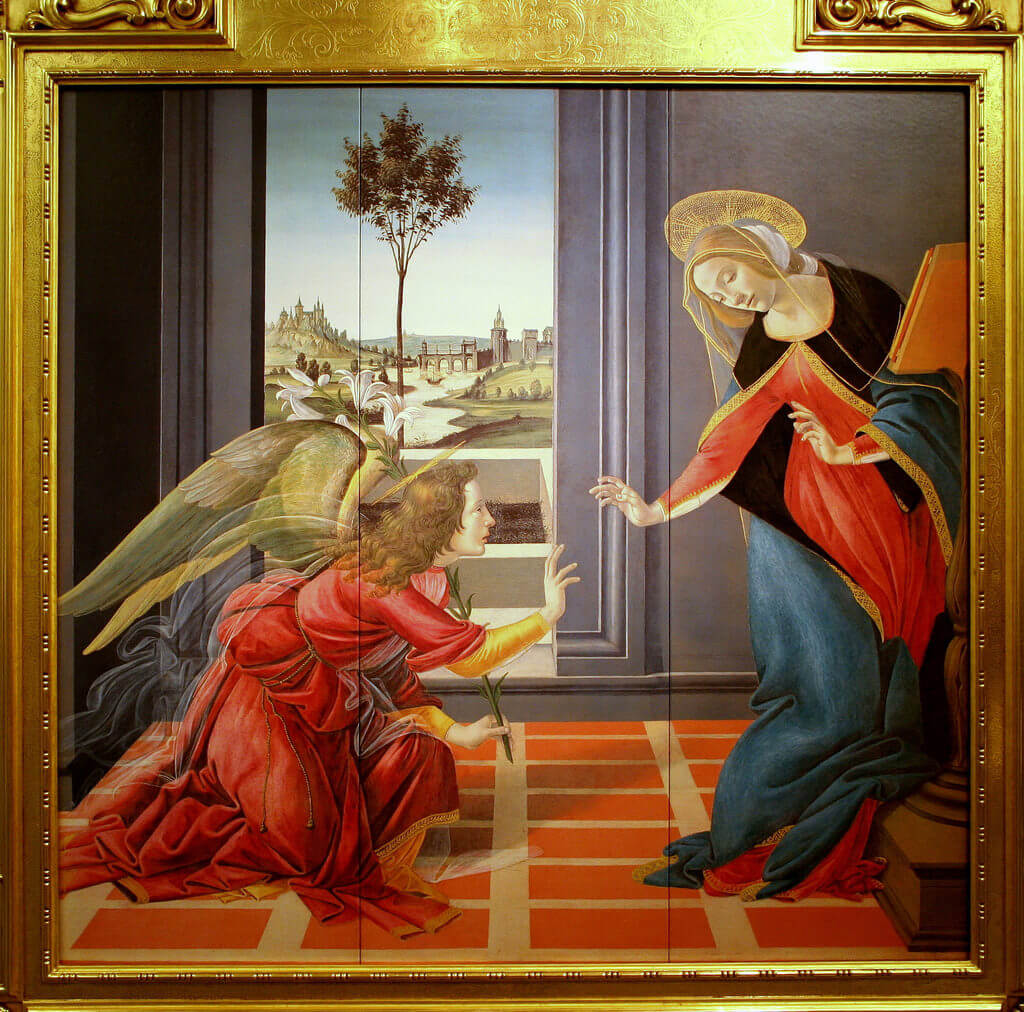