Art Stories: Edward Hopper’s Nighthawks — How We Spend Our Days

I had a high school art teacher who wanted her students to do more than develop artistic skills. She wanted us to love the art that was already in the world. She continually put great art in front of our young eyes, and insisted that we not move on from it too quickly. This may be one of the greatest lessons anyone has ever tried to teach me—stop and look before you move on. Imagine.

One of the paintings she introduced us to was Edward Hopper’s Nighthawks. Edward Hopper (1882 – 1967) was a prominent American Realism painter from New York. His paintings are subtle, sparse canvases with still, simple scenes in subdued color pallets.

Something about Nighthawks struck me, but I could never say exactly what. I have since discovered that this is a common experience people have when they look at Hopper’s work. His style conveys a lonely, mysterious emptiness. The people in his paintings (if there are any at all) are often either alone or doing solitary things in the company of others. So what makes Hopper’s work so engaging to so many?

Isn’t this one of the ways art does its work? It captures moments that draw us into deeper tales and truths.

One Hopper scholar, Mark Strand, said, “It is my contention that Hopper’s paintings transcend the appearance of actuality and locate the viewer in a virtual space where the influence and availability of feeling is predominate.”[1] I think Strand is touching on what makes Hopper’s work so compelling—his canvases create a sense that the viewer stands in the scene itself. When I look at Hopper’s work, I feel like I have been to the places he has painted.

How does he do this? How does he give the viewer the sense that we are in the scene—that we have been there before? I contend this is more a trick of the mind than the brush. Hopper’s scenes are moments that are in the process of passing away. We try to construct the narrative for the moment at hand, and wonder what will follow. We do more than look at his canvases. We imagine them.

Hopper’s paintings, though usually very still, present a world in motion. Strand said Hopper’s images “recognize the importance for him of roads and tracks, of passageways and temporary stopping places, or to put it generally, of travel. They recognize that the invitation to construct a narrative for each painting is also part of the experience of looking at Hopper. And this, inasmuch as it demands an involvement in particular paintings, indicates a resistance to having the viewer move on. These two imperatives—the one that urges us to continue and the other that compels us to stay—create the tension that is constant in Hopper’s work.”[2]

We stop and look. We imagine. We stand in the tension of wanting to stay but needing to move on. Isn’t this one of the ways art does its work? It captures moments that draw us into deeper tales and truths.

In Nighthawks, we approach the diner in Greenwich Village. The restaurant is a container of light. It is late, maybe past midnight. The streets are empty. We see the man and woman at the counter. She is disengaged, perhaps lost in thought, or maybe in a fight with the man[3] who is talking to the soda jerk. We don’t know what to make of the shadowy figure whose back is to us. Hopper wanted that man’s presence to raise the possibility of danger in the night.[4] Does the sight of him slow our step as we approach this temporary stopping place? Do we read this scene as sinister? As lonely? As innocent? In this world, all are possible.

We wonder. We imagine.

Nighthawks, and the rest of Hopper’s work, invites us to wonder about the scene. What is happening? This scene at the late-night diner arouses familiar feelings to which we can relate—the sudden tinge of fear after happening upon danger, the hollowed-out feeling of fatigue from staying up too late, exhilaration at the possibility of a new romance, or the emptiness of a love that is falling apart.

Throughout his life, Hopper struggled with depression which manifested itself in an inability to produce. This creative languishing is a common experience for artists. Hopper said, “It is hard for me to decide what I want to paint. I go for months without finding it sometimes. It comes slowly.”[5] His friend Walter Tittle described seeing Hopper “suffering from long periods of unconquerable inertia, sitting for days at a time behind his easel in helpless unhappiness, unable to raise a hand to break the spell.”[6]

Perhaps this was Hopper’s brilliance— his struggle to come up with ideas. Perhaps he was vexed by an artistic determination to try to capture a world that was passing away, which led him to capture ordinary, rather unmemorable moments of life unfolding. Perhaps the reason his work moves so many is because it is in these sorts of moments that we spend most of our days. After all, as Annie Dillard said, “How we spend our days is, of course, how we spend our lives. What we do with this hour, and that one, is what we are doing.”[7] 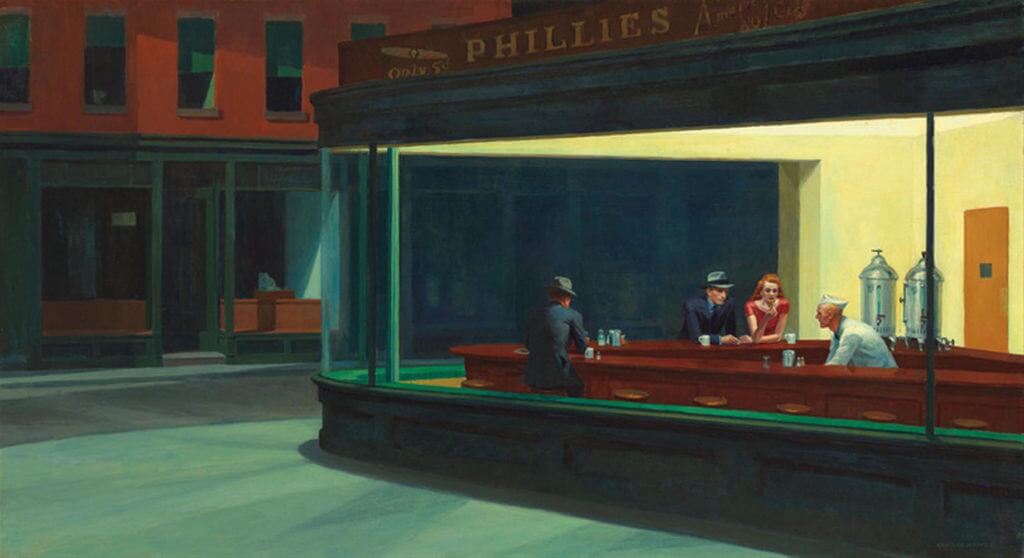 [3] The painting got it’s name from Hopper’s wife, Jo, who likened the man with the blue-banded hat’s nose to a beak.