Art Stories: Norman Rockwell’s Girl at Mirror – They Called Him an Illustrator.

They called him an illustrator. Not an artist.

Norman Rockwell was a visual bard, an historian, and an observer. And he was prolific, producing more than 4,000 original works of art over the course of his life.

Much of his work was dismissed by art critics, who considered his paintings to be too idyllic and sentimental to be considered great art.[1] If you look at many of his Saturday Evening Post covers, it isn’t hard to understand why the critics felt this way about his work. Many of his figures bordered on being caricatures: the lanky football player with his protruding adam’s apple, the redhead with the impossible freckles, the middle-aged man with the cigar nub sticking out of his mouth, the old woman and young boy saying grace over their meal.

We’ve all been where she is, trying to look through the mirror to what might become of us. We’ve all felt stuck between two eras. We’ve all wondered how we can get from here to there.

His style was disarming. He set viewers at ease. He connected with people. His “illustrations” seemed to speak in a common tongue. As he grew older, he began to take on more serious subject matter, like racism, basic human freedoms, leaving home, and going to war. These paintings did not stand alone as his only substantive work, however. They shed light on the depth of his other works which had been so casually dismissed.

Rockwell’s entire body of work comes together to give us something rich, beautiful, and honest. He didn’t just honor the great World War II generation in America; he preserved their era in stills. His work is like a time capsule holding the cares, fears, humor, ways, and quirks of the generation we are right now in the process of losing. And when we look at that generation in his “illustrations,” we find we are not that different.

Take, for example, Rockwell’s Girl at Mirror, which appeared on the cover of the March 6, 1954 edition of The Saturday Evening Post. This was the 281st of what would wind up being 322 total Saturday Evening Post covers he would paint over the span of 47 years. Think about that for a minute. Anymore, the exception is the person who does anything for 47 years.

Nothing in Girl at Mirror is where it permanently belongs— the mirror leaning against the chair, the stool the girl has scooted into the middle of the room, the hand held mirror, brush, and make-up on the floor, the doll cast aside. Even the girl herself is not yet fully dressed, wearing only a slip. The actress Jane Russell looks up at the girl from the magazine page. The movie star is offered as a sort of “finished product” to the girl who is very much a work in progress.

(Interestingly, Rockwell later regretted including Jane Russell in this painting, saying, “I should not have added the photograph of the movie star. The little girl is not wondering if she looks like the star but is just trying to estimate her own charms.”[2])

Each of these little composition decisions that Rockwell made to dress the scene come together to tell us that this girl is someplace between being a child and a woman, and she knows it.

When we look at this painting, we wonder what she is thinking about. Will she put on her play clothes or try on one of her older sister’s dresses? Will she lace up her scuffed saddle shoes or take her first awkward walk across a room in heels? Does the woman from whom she borrowed the brush and make-up know she took them? Is she hiding? How private is this moment supposed to be?

We wonder about these things, but we also know this girl. We’ve all been where she is, trying to look through the mirror to what might become of us. We’ve all felt stuck between two eras. We’ve all wondered how we can get from here to there. We know what it is like to sit in that posture, all gathered in on ourselves. Her eyes seem to plead with the girl in the mirror for some sort of answer, or at least help in figuring out what questions she should be asking. We’re all “trying to estimate our own charms.”

And just like that, Norman Rockwell leads us into a private room filled with weighty questions about who we are and who we were meant to be, and he leaves us there alone to pine. This is not the work of a mere illustrator.

Those who dismissed Norman Rockwell “just an illustrator” took his paintings to say, Here is the world. Isn’t it a quaint and funny place? But when I look at Girl at Mirror, I see the brilliance of an artist whose work echoes what Frederick Buechner said: “Here is the world. Beautiful and terrible things will happen. Don’t be afraid.”[3] 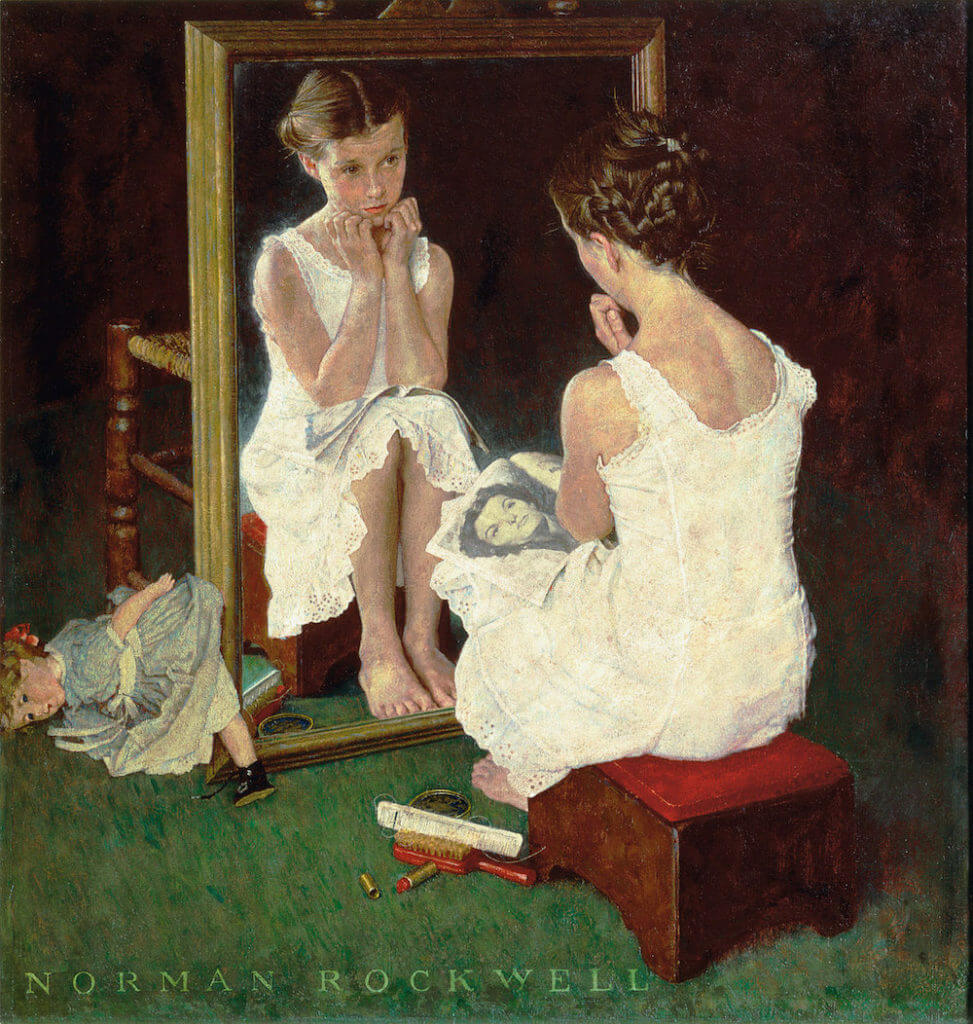 [3] Frederick Buechner, Beyond Words: Daily Readings in the ABC’s of Faith.