Tuning Up: A Few Words About the Forums

Now that the new site has been up and running for a week, I thought I’d take a few minutes to address some questions that have come up.

Let me start by taking a time-warp to 2007. Back in the days of yore there was a thriving message board (or forum) on the Andrew Peterson website. It was affectionately called “Andyland” by those who hung out there, and it was filled with a loyal bunch of Andrew’s fans who enjoyed a vibrant conversation via the website.

When we launched the Rabbit Room, the decision was made to shut down that message board and direct those conversations to the Rabbit Room comments section, where we hoped to provide a more defined area for discussion via blog posts. There were a few folks who didn’t care for the change and moved their attentions elsewhere, but most folks rolled with it, and it wasn’t long before the conversation was a lot bigger than it had been before. Soon there were more than just Andrew Peterson fans involved. Jason Gray fans added their voices, and Andy Gullahorn fans, and Eric Peters fans, and Wendell Berry fans, and pretty soon that word, “fan,” began to drop away. What we had instead were folks who enjoyed the Rabbit Room itself and it’s general focus on art, music, and story—which was the point all along.

That group of folks grew and ultimately called for Hutchmoot, they wanted to incarnate the Rabbit Room in flesh and blood, and in 2010 we made it happen. People came and met one another and formed real relationships (marriages even) that are still growing and maturing today.

But somewhere along the way there was a bump in the road. It didn’t feel like a bump at the time, it felt like pure fun and excitement, but years later we’ve begun to realize that the bump knocked a wheel off the cart.

On a whim, Thomas McKenzie created a private group on Facebook so we’d have a handy place to pass along information and Hutchmoot alums could easily find one another and stay in touch. No problem. That’s awesome.

But here’s what happened over time:

That brings us to 2016. Over the last couple of years, we’ve watched as the vibrant discussions of the Rabbit Room have slowly moved away from the site itself, not just to Facebook, but largely to a private, members-only group on Facebook. What began as a way to include people and foster community, had become a means of excluding people and fostering an inner circle in which some were welcome and those on the outside were left oblivious or frustrated. For an organization whose mission is to foster community, the wheels were coming off the axles.

Now that doesn’t mean the Facebook group was a bad thing. It wasn’t/isn’t. It’s a great thing, but it was having unintended consequences, those consequences were large enough to endanger the long-term health of the community it was created to serve.

So we’re upgrading those wheels to fresh new radial tires and putting them back on the cart where they belong. Here’s how:

But wait, some may say, I don’t know what a forum is. It looks complicated. I don’t think I can do that. Let me point out first that it’s significantly simpler than the interface pictured below. 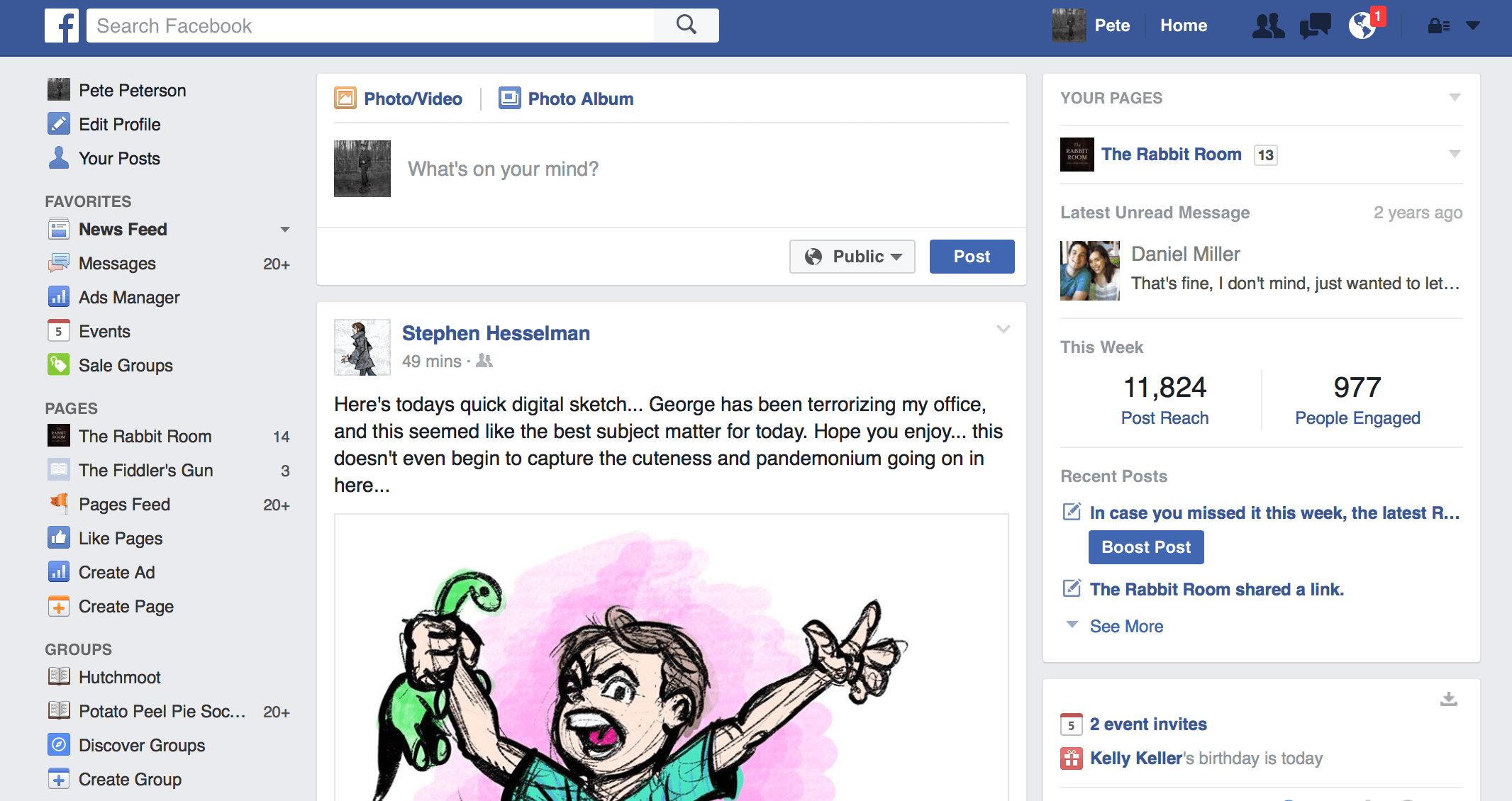 Sure, we all know how to use Facebook today, but that’s because we’ve forgotten our first baffling interactions with its complex set of functions, divisions, and conversations.

The Rabbit Room isn’t trying to replace Facebook, of course, but we want to provide a healthy place for a more focused set of conversations.

Having said that, yes, there are still bugs to work out, features to implement, and tweaks to make in order to better realize what’s already there. Like anything new, it’s going to grow and change and evolve. Does it look to some like an overload of information? Almost certainly. But, as Rebecca Reynolds points out here, there’s no need to take it all in, any more than you have to participate in every single conversation when you go to a social gathering at a friends house.

This is a room. And it shouldn’t be a locked room. You’re invited to come inside. As conversations begin to take place and draw more voices, the forums are the best way to help people find the topics (and other voices) that suit them best. We’ve always been committed to maintaining a place for measured and gracious conversation, and that won’t change. The forum moderators are there to pay attention to what’s going on and to ensure that things remain safe and civil—just as has always been the case.

To those who were part of the “inner circle” and are feeling a little like someone has just kicked in the door, consider this: The Rabbit Room is made up of thousands of people from all over the world, and all of those folks have something beautiful to add to the community. It’s time we set them a place at the table.

To everyone, come in and be welcome. There’s room for you here.