Let Kids Fight Evil So They Can Be Heroes: A Response

A year ago, I posted an article titled, “Let Kids Fight Evil So They Can Be Heroes.” It was among the simplest, shortest articles I’ve posted on the Rabbit Room. The basis of my post was the concept of allowing children to battle evil in their play time.

I quoted Brennan Manning, who once wrote: God will bring good out of evil – even a greater good than if there had been no evil – and the trial will have been an immense good for us. And in conclusion, I flippantly stated, “So I say, the bigger the bad-guy, the greater the hero.”

The comments after my post brought the discussion to a deeper level than I had realized the topic could go. As I dug further into how I felt about pretend violence during play, I felt that I owed the readers a fuller train of thought.

In reading my article, it seemed hard to avoid coming to a conclusion that violence was the root of all of this hero talk. Thats a tough one, because I don’t ever think in terms of violence when playing with a child. I certainly am not an advocate of real-world violence. And I’m sure that if I dig into what I’m saying, I’ll find there are some double standards apparent.

I might have encouraged my child to turn the other cheek, but then played with Lord of the Rings action figures with him, slaying hoards of orcs on a daily basis, and sometimes having fun being gross about it. And in the same respect, my wife and I were proud of our daughter for physically standing up to bullies who were picking on a child with disabilities on the playground. It was hard for us to rebuke what she did. Sure, we could have encouraged her to take his hand or go get a teacher, but I think we appreciated that she believed that some things are worth fighting for. It was honorable that she risked being disciplined at school in order to physically stand up for someone who could not defend herself. To me, and likely to that boy, she was a great hero that day. I realize that a lot of parents would disagree with me. In some countries, kids experience violence on a daily basis. We are blessed, here in America, to have the choice to protect our children from even viewing violence. 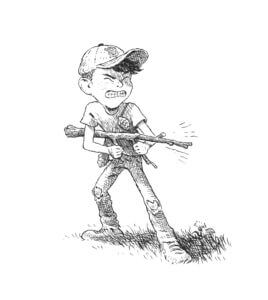 I raised my son (now 22) on action heroes and army men. We enjoyed great fun together, teaming up to defeat bad guys on a regular basis. I never made a practice of trying to instruct him on real world violence as we played though. It was play. It was an chance to be kids, to battle in unrealistic ways. It is each parent’s right to decide if play time should be mindless play, or if there should be learning involved. I always lean toward the first.

I do think there is a difference between playing with action figures and pretending that evil is overthrown and, say, setting up a model of Osama Bin Laden’s compound with your son’s GI Joe’s and reenacting the real world tension and violence of that raid. During play as a boy and with my son, our “bad guys” were always as ridiculously bad as possible, and we conquered them in ways that didn’t translate to real life. And in the end, we ate some PB & J sandwiches and went on with something else in life. We didn’t go looking for real evil to fight. Our son never once used violence to solve anything. I don’t remember reports of a single fight at school. On the other hand, our daughter played with Barbies, building imaginary families, and she was the one we were more likely to get calls from the school about regarding fights. I did not find that the presence or absence of violence during play time impacted their decisions to be violent in life.

It’s a more complicated subject the deeper you dig. And I don’t think I ever viewed play time as a time to instruct and teach my son once he was old enough to create scenarios and play on his own. I believe there are a lot of people that would disagree with me on that, but I viewed playing, and getting absorbed in a spontaneous, fictitious story as a wonderful thing for a child. I still do. I frequently think back on playing with little green army men with my boy years ago along the bank of the stream in our back yard. I miss it tremendously. I miss tromping through the creek with him, stick swords in hand, as we slay imaginary goblins, pretending to be powerful. Pretending to fight along side of each other.

I wasn’t always a great dad in a lot of areas. I failed many times and live with some regrets. But play time was one of the few areas I may actually be proud of, and I believe that’s a road you are given a right by God to pave for your kids.