Hutchmoot 2016: Feasting as an Act of War

It was a grand first day, though I’m sure everyone’s as tired as I am. A few people asked if I could email them the opening remarks, and I thought it might be easiest to just post them here. I’ll leave out the yearly “no one’s a creative but everyone’s creative” rant and post the main body of what I read here. I was in the process of writing this out when I remembered that I had written a piece for a magazine (can’t remember which) that covered the same territory, so I adapted it for Hutchmoot.

Nobody ever tells you how hard it is to be a grownup. Nobody tells you how often you find yourself in situations that have no personal precedent, or how often you’ll lie in bed awake worrying about your kids, your mortgage payment, your obligation to shed light in a dark world—dark with terrorism and war and slavery. Two hundred years ago a farmer knew what he was called to do. He was called to feed his family, and that took up most of his time. He didn’t know about what was happening right that second in the Middle East, didn’t have billboards clamoring for his attention, didn’t have the constant siren call of social media luring him away from what really mattered. That farmer, to be fair, would almost certainly choose to trade places with us, in order to have a moment’s rest from hard labor or to have access to the world’s books and art and music, or to pursue something other than the tilling of the soil. It’s true, in some ways, that we have it good. In other ways, things are harder than they’ve ever been, because we’re living in a culture that is increasingly disembodied.

We’re constantly being thrust forward into new technologies, new moral dilemmas, new and outrageous demands on our minds and emotions. Were humans meant to engage with screens as often as we do? Were we meant to navigate the seas of popular opinion, or the labyrinth of the Internet? How are we supposed to know what to do when videos surface showing the horrors of war, or when we learn about whole villages being ravaged in the Congo? I want to help, but I feel overwhelmed. When I read the daily headlines my conscience is so battered by the feeling that I’m not doing enough that when I sit down with my family for dinner I hardly know how to enjoy the food. What kind of world is it that my children are inheriting? It’s becoming increasingly clear that the battle lines (in American culture, at least) are being drawn in the ether of our minds and hearts and not on the earth of our hands and feet.

It’s hard to be a grownup. I don’t know how to solve my own problems, let alone the world’s, so what do I do? I think—and you’ll have to ask me in about twenty years if I was right or not—that the answer lies not merely in our minds, or in the spiritual realm, but in the physical one. In fact, the older I get the more convinced I become that you really can’t untangle the physical and spiritual realms. Try to separate the struggle into nice-and-neat categories and you’ll be right where the enemy wants you.

In C. S. Lewis’s book Perelandra the villain, Professor Weston, is possessed by a demon. Ransom, our hero, is on a faraway planet that’s more or less a version of Eden: sinless, unfallen, beautiful. Ransom is charged with protecting it from the evil invasion of Weston, but he doesn’t know how. Then he slowly accepts the fact that he has to physically, bodily stop Weston from seducing and destroying the inhabitants of the planet. It’s up to him. He’s terrified because he doesn’t know if he can outfight a demon-possessed man, but in the end he decides to confront the enemy, hand-to-hand.

I bring this up because I was talking to a friend about his struggle with lust, and he pointed out that he had come to believe that the real battle wasn’t just spiritual, but was physical. It wasn’t as much about a change of mind as a change of setting. It was about literally standing up and walking away from the computer when he was tempted. He wasn’t able to overcome the enemy in his mind, but if he could just slam the laptop shut and go outside, go find another human to talk to, he stood a chance.

If you want to anger the devil, next time you’re tempted to lust just go for a walk in the woods.

How often do we misunderstand Paul’s reminder that our battle is not against flesh and blood, but against the powers and principles of darkness in the heavenly realms (Eph. 6:12)? Did Paul mean that flesh and blood don’t matter? Not at all. Did he mean that overcoming those forces of darkness only worked in a detached, theoretical or mental arena? No. The spiritual forces are at work in a very physical, material manner. Jesus didn’t die in a theoretical sense. He literally died with a literal body. His miracles were physical. The world God made has substance, and the evil played out here is just as substantive as it is spiritual. We need to remember that while the struggle is against the spiritual forces of evil in the heavenly realms, the battlefield where we fight is within the realm of creation itself. God didn’t just give us souls; he gave us bodies. He didn’t just give us the idea of family or of sacrifice or kindness, he gave us wives and children and actual lives to inhabit.

We need each other. We need the church. We need to interact with creation. The way we fight back against evil is to embody the battle with acts of love. We fight back with a tender kiss between a husband and wife, with the vocalization of God’s blessing over our children, the literal laying on of hands, the harvesting of real vegetables from a real garden, the touch and feel of real communion bread and real communion wine. “Put your finger here; see my hands,” Jesus said to Thomas. “Reach out your hand and put it in my side. Stop doubting and believe” (John 20:27). This victory is not just theoretical. It is as real and as touchable as the chair you’re sitting in, as physical as Jesus’s hunger when he appeared to the disciples after the resurrection.

We should, therefore, remember that we don’t fight back only with prayer. That would be equivalent to saying to a hungry person, “Go and be well fed,” without offering them a bite to eat. Prayer is essential, but faith without works is dead. Sit down with your children and listen to them. Eat with them. Hug them. Teach them to tend a garden, placing your hands in the wounded yet life-giving earth. Stop doubting and believe. Look your daughter in the eye and tell her she is more beautiful than she could possibly imagine. Muster the courage to show up at church on Sunday. Make your home lovely. Commit to the slow work of shaping the world around you so that it looks like your best guess at what the Kingdom looks like. Make the words you utter words of life and not death and the world will see your good works and praise your father in heaven. 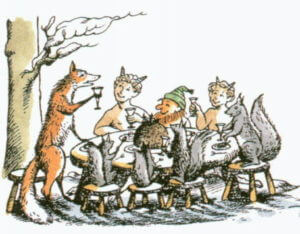 Last year, Rabbit Room friend Kelly Keller said something that resonated with all of us. She reminded us that in The Lion, the Witch, and the Wardrobe the White Witch encountered a family of animals gathered around a table, eating and celebrating Aslan’s return. The witch considered it an act of war. So draw up your battle lines. Gather around this table, raise a toast to the King and the coming Kingdom, and fight back.