Champagne For The Soul: Rediscovering God’s Gift Of Joy

For the past several years, I’ve had the pleasure of being invited to play an annual concert. It is the only annual show I have, which is fewer than many artists, yet one more than a lot of other folks, I realize. Ministers at a small church in Oak Ridge, Tennessee, Tom and Lee have become much more than promoters; they’ve become dear, empathetic, affirming friends. Each year, typically in the spring, they invite me back to play for their congregation of all ages. The church building, a former grocery store with amazing wood parquet floors, sits directly underneath the city’s water tower on a ridge. If that tower were to ever burst, the church would be traumatically inundated in diluvial proportion.

I typically arrive at their church late in the afternoon, and it being an early show, am usually driving away by 8pm. Lee and Tom never fail to send me on my way with Dr. Pepper, a full belly, and an edified soul. Knowing my love for books, they occasionally give me specific, hand-selected titles by Sherwood Wirt, St. Augustine, John Newton, and others. These books and their authors, no matter their modernity, inevitably reveal broken, addicted, depressed, duplicitous men who are fully aware of their own brokenness, depression, and duplicity. Intent on encouragement, Tom and Lee know me well, and each year they are keen, if not glad, to remind me I am not alone.

A few shows back, Tom, the pastor, handed me a copy of Champagne For The Soul by Mike Mason (The Mystery of Marriage, Furniture of Heaven). Tom is the most joyful man I have ever met in all my life, and when he told me of his struggle to be joyful I thought he was kidding. But he wasn’t, and along with Champagne, he included a note describing how this book taught him much about joy in the Lord, and how it saved him, not eternally, but from himself. 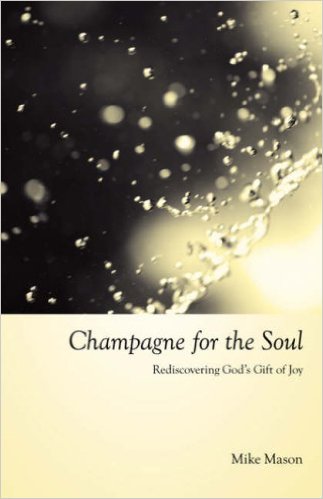 He recognized in me a similar need to fight to stay encouraged. The book’s ninety chapters are brief, reading more like a devotional than a book, each selection dedicated to the subject of joy and happiness. I read a few chapters half-heartedly when I returned home from that trip, and, disengaged, I pigeonholed the book as self-help, a genre for which I have no love or patience. I slipped Tom’s thoughtful, handwritten note between the covers and shelved the book. That was probably four or five years ago.

Coming to terms with my own addictions, I gave the book another try this year, a challenging one as full of pain as it is of redemption. In the author’s preface, Mason says he embarked on a “ninety-day experiment in joy.” Allowing room for failure, he would choose to be joyful in the Lord every day for ninety days. Choice is the key word here.

Candidly, he writes about his own alcoholism, anxiety, depression and penchant for choosing misery – just as much an addiction and coping mechanism as are drugs, alcohol, pornography, or fill-in-the-blank. Much like the author, “happiness has not been my strong suit” either. To “break his addiction to the cheap wine of melancholy, he had to seek champagne for the soul,” an authentic spirituality.

Why ninety days? What’s significant about that number? Because something happens internally to the sober soul in that crucial time; the brain begins to rewire itself (a miracle in and of itself!), the heart’s fog starts to clear, and we begin to see not only ourselves, but the world as it really is, and who we are in it. Having embarked on my own ninety days of sobriety this year, I began to notice that the opaque fog numbing my heart began to clear, and I began to believe new and true things about myself, about my place in the world, about the ultimate identity of my soul, how I’ve given it over to so many shadow brides. I can be just as addicted to misery as to pornography.

Over and over again, Mason, admittedly hokey at times, reveals insights – ninety, to be exact – that he’s gained as a result of not only his trial in joy, but of Scripture’s command. It is indeed difficult to believe that one man can be so full of joy considering the world in which we live, but Mason’s gentle wisdom seems to curb any perceived corniness on his part. We, of course, bring our own cynicism to everything we do and read. As adults, deep down we stop believing that joy is important, so we let it languish, choosing cynicism instead. I know I have.

This year alone, my wife and I have reread Champagne no fewer than three times. Changing old habits, attitudes, and beliefs is anything but a simple endeavour. I need daily reminders that joy is not only a choice in this dark, difficult world, but is absolutely crucial to my life as a believer and a person who has to fight for encouragement. After all, as Mason points out, the search for joy is inseparable from spiritual warfare. I am more convinced of that now than ever before. As St. Paul reminds me, “Rejoice in the Lord always. I will say it again: Rejoice.”

Eric Peters, affectionately called "Pappy" by those who love him, is the grand old curmudgeon of the Rabbit Room. But his small stature and often quiet presence belie a giant talent. He's a songwriter of the first order, and a catalogue of great records bears witness to it. His last album, Birds of Relocation, blew minds and found its way onto “year’s best” lists all over the country. When he's not painting, trolling bookstores, or dabbling in photography, he's touring the country in support of his latest record, Far Side of the Sea.