I’m going to tell you a secret. This is one of those details of the writing process that feels so intimate I’m almost embarrassed to share it.

When I did not yet know my heroine’s name would be Persimmony Smudge, for much of the first draft of The Rise and Fall of Mount Majestic I called her “Joy.” I knew that would not be her name in the book; it was a bit of shorthand, a placeholder. My early notebooks are filled with it. I named her that while she was still lost, grumpy, prone to temper tantrums and pouting—in fact, rather (in the first draft) a little brat—anything but joyful. She certainly did not Embody an Idea. I called her that, in part, because even though I didn’t know exactly how the story was going to go, I had already glimpsed the ending—one moment in particular, one scene, in which something profoundly true and good would burst out of her in messy ecstasy.

And so, underneath and deeper than the name of Persimmony, there was Joy, and in giving her that word to wear at the beginning of our journey together, I gave her an arc and a climax.

To be named is to be set upon the path of an adventure.

“No longer will you be called Abram; your name will be Abraham, for I have made you a father of many nations.”

“You are Peter, and on this rock I will build my church, and the gates of Hades will not overcome it.”

“There was a boy named Eustace Clarence Scrubb, and he almost deserved it.”

For it is naming that marks you as part of creation. You are not nothing. You are unique in all the cosmos. You are loved. You are.

My favorite story about naming is Madeleine L’Engle’s book A Wind in the Door, the sequel to A Wrinkle in Time. Evil forces of hatred, dissension, and annihilation are ripping holes in the universe, and Meg Murry learns that she, along with her new cherubim partner Proginoskes (a singular cherubim; he is most certainly not a cherub), is a Namer. Proginoskes has learned the names of all the stars in all the galaxies “to help them each to be more particularly the particular star each one was supposed to be,” and Meg must similarly reach out with love, seeing in even the most despised of characters the seed of what they are meant to become, telling them their true names, their true selves. For it is naming that marks you as part of creation. You are not nothing. You are unique in all the cosmos. You are loved. You are.

To be named is to be known.

This is why, as an author, it’s so vitally important to me to get the names of my characters right. Persimmony, when I eventually settled on it, was meaningful to me—like persimmon, the bitter fruit that ripens to sweetness. Smudge—unheroic, unimportant, ironic. And even though Persimmony Smudge exists only in my imagination and the imaginations of those who read the story, she will always exist—she can’t un-exist now, can’t undo her own story. Though she is not matter, she matters (to use L’Engle’s pun) because she is named and known. I created her. I named her (twice!) She is.

I have a friend who, more than anyone else I’ve known, is a Namer.

She has named me Beautiful, Playful, Fierce, Bold, or my favorite, recorded in my “encouragement” file, Giant Walking Womb of Creation.

That is her special gift: to find the broken people and remind them of their names, or give them new ones. “This is the word that defines you,” she seems to be saying, “not the false words you’ve been calling yourself or others less loving have called you.” And because she is a poet, she is uniquely able to craft words that make people seem like the most epic versions of themselves. I imagine her like Adam sitting on a stone in Eden as the creatures pass by, laying a hand on each and saying gently, “You are…”

There’s a beautiful audacity to this kind of naming. It’s one thing to say to a frightened person, “Hey, I know you’re scared, but try to be braver. You can do it.” It’s quite another to say, “Your name is Brave. I love you for it. Go and be who you are.”

It was precisely this discomfort that made me think recently of Persimmony squirming in the audacious, misfitting first draft I stuck her into. I imagine her stomping her foot and saying, “Don’t name me Joy when that is nothing like me.”

I have a feeling that if God bent down today and whispered my true name, the name written on a white stone, the name he gave me before the world began, it would not be an immediate comfort to me. There would be no warm fuzzies. I would not say, “Of course! I always knew it would be that!” I expect I wouldn’t recognize it at all or understand what it had to do with the person I see inside myself. There would be a baffling sense of disconnect.

Perhaps it is best that we not know our name too early in the story. It might terrify us. Imagine going to a timid little girl who gets spooked by her own shadow and telling her, “Actually, your real name is Deadly-Dragon-Piercer.” The implication of the plot to come, no matter what the resolution, might be too much for her. The poor girl would never come out of her bedroom. If I must someday be known as Excruciating-Torture-Chamber-Survivor, I’d rather not know it ahead of time, thank you anyway. 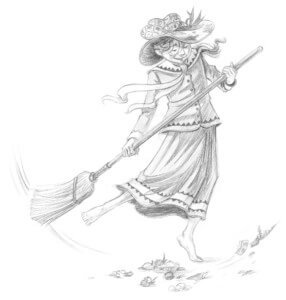 It is enough for me to know that the name is there, underneath and deeper than the name Jennifer—that the Author gave it to me even before he wrote life into my bones, that it will shine out of me in the climactic scene when I finally grow into its meaning, and it will be the name that defines me as a character in the Great Story.

Someday I’ll be told, gently, just as if I were to put my arm around Persimmony at the end of her story and say to her, “In the beginning, before you were born on paper, when I dreamed you into being and set your feet upon a journey, I named you Joy. And now, finally, you know why.”

Jennifer Trafton served as the managing editor of Christian History magazine before returning to her first love, children’s literature. She is the author of two middle-grade novels, The Rise and Fall of Mount Majestic and Henry and the Chalk Dragon .