The Founder is a good film. From the story of Ray Kroc’s invention of fast food, to the acting (Michael Keaton, Laura Dern, and Nick Offerman), The Founder is an enjoyable ride that reveals Kroc’s rise to the top of the most American of empires. But hours after the credits rolled, I realized why I felt so empty after watching it.

The Founder is soulless.

The story of Ray Kroc’s fast food empire isn’t rooted so much in good ole hard work as it is acting at all times somewhere between “duplicitous” and “wicked.” Originally, McDonalds was a single San Bernadino hamburger joint with lines around the block, run by two brothers who perfected the art of fast food. An efficient work station (30 seconds from grill to customer!), simple menu (burgers, fries and cokes!) and convenient packaging (you can throw it away!) brought families by the carload and eventually drew Kroc’s attention.

From there, Kroc’s natural salesmanship and relentless drive for more (in any area of life) broke through the McDonald brothers’ defenses, allowing Kroc to legally oversee and take over franchising for the brand. A few legal loopholes later, the McDonald brothers found themselves outsiders looking in to their own company. And they weren’t the only characters with such perspective, since Kroc also steals the wife of a fellow businessman in Minneapolis who buys into the company.

The bottom line: If you have something Ray Kroc wants, he will find a way to take it. 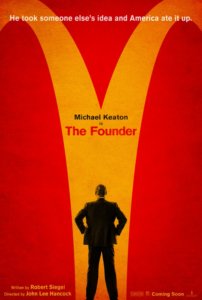 This story is nothing new in Hollywood. Wolf of Wall Street tells the same tale. So does every movie made about the recent financial crisis (Margin Call, The Big Short). The problem is that the villains in those movies are treated as villainous. They are horrible people doing horrible things and the distance is felt between audience and protagonist, a necessary gap I was unable to understand until watching The Founder. Watching Michael Keaton deceive anyone and everyone was a thrill, and I was cheering him on the entire way.

During those two hours, I was excited to see Keaton swindle the McDonald brothers out of their rightful share of the (crazy) profits. “They had no vision for what McDonalds could be.” I was agreeing with Keaton, who’d also outwitted me. “Her husband doesn’t appreciate her,” was my initial response to why Joan Smith (Linda Cardellini) should be with Kroc instead.

Maybe that’s why I have issues with The Founder even so long after watching it in the first place — that I stand among those who were duped by Ray Kroc. For 115 minutes, I also gave Kroc whatever he desired — my attention, my approval — even as he completely disregarded any needs of my own. He bridged the gap that typically exists in these kinds of films, allowing me to empathize with a man who deserves only scorn.

Maybe that makes The Founder a better film than I realized.