Cooking Up Something Special in The Legend of Zelda

And Nintendo knew what they were doing—they whetted my appetite for four years, releasing preview images and extensive gameplay videos. Sprawling and open-world, this was going to be something new, unlike any Zelda game before. I devoured it all, preparing for something exciting and different—and finally, Breath of the Wild arrived!

And then I cooked virtual food. 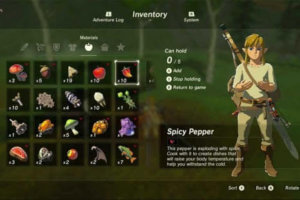 There are a thousand things to do in The Legend of Zelda: Breath of the Wild, but this one is so simple that it doesn’t even qualify as a mini-game. Here’s how it works: when Link is near a campfire, open your inventory and pick your ingredients. The peppers you picked from that bush, for example, or the poultry you purchased from that trader. Or maybe the Hyrule Bass from when you grabbed that fish right out of the water like a boss.

Cook them over the fire and see what new dish or elixir is now in your inventory, and what health and abilities it supplies when you eat it. 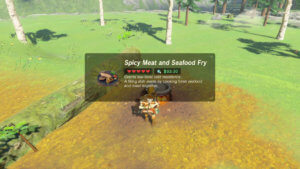 I don’t know why such a simple game mechanic is so satisfying to me, but collecting ingredients and preparing these culinary power-ups takes up a good bit of my gameplay.

I’m going somewhere with this.

Hutchmoot 2016 included a great session about originality and “stealing like an artist.” Chris Yokel summed up his part of the session here.

Here’s my brief, paraphrased recap: instead of trying to develop a unique artistic voice, immerse yourself in the art that you love. Over time, your voice will develop as a fresh but familiar creation informed by, expanding on, and remixing those influences.

But Link’s adventure is helping me see how that idea holds true not only for creators but for individual stories as well. Because as different as this game is, there’s something astonishingly… familiar about it.

The Legend of Zelda has always embraced the remix concept. Every Zelda game includes a version of the classic “hero’s journey” (itself a remix concept), with the young but determined Link and the noble Princess Zelda in a battle against evil (often in the form of Gannon). Along the way, Link rides his steed, Epona, to Kakariko Village and the Great Fairy Fountain. He trades with Beedle and discovers the Triforce.

All of these elements would be familiar enough, but they are mixed with gameplay and storytelling that explores the earliest Nintendo games and the most recent console and PC games. This is a series getting back to its roots, and the original Legend of Zelda game (1986) was a wilder, less structured animal. Trying to emulate that early format in a new generation brings Zelda into the territory of recent open-world games like Skyrim and The Witcher 3, and I’ve heard comparisons to Minecraft as well. Plus, this is by far the Zelda game that feels most influenced by Japanese culture… and is this just me, or do the shrines feel a little like lightweight Portal levels?

This is a game with a lot of texture.

Storytelling experts often instruct me to hone in on the heart of what my stories are about. Marketing experts have taught me to find concise pitch-lines to describe my stories. They’re not wrong, but I have sometimes limited myself by being shortsighted in my pursuit of those things.

Breath of the Wild is not about one thing. It’s a dish. You can call a dish by it’s name—Spicy Meat and Seafood Fry—but to get there, you need all the ingredients, like meat and peppers. And the great thing about a dish—or a video game—is that the combination makes it more than the sum of its parts.

In my own storytelling, I’m taking the time to collect a lot of ingredients and test some recipes, because I want my next story to be as textured and complex and delicious as Breath of the Wild.

I also want to hear what you think. Are there dangers to complexity? How do your favorite stories combine their ingredients in unique ways? And what are your favorite parts of Breath of the Wild, or of the Zelda series in general?

Let’s discuss in the comments below!