My wife Gina and I don’t watch television, so we rarely hear about any film that is not your typical blockbuster. So, when we decided on an impromptu movie at a local dollar theater last night, it was to our surprise that the theater was packed to the gills for a movie called Lion.

The film was inspired by the life of Saroo (Brierley), a 5-year-old boy from a small village in India, who finds himself separated from his older brother Guddu and trapped on a train headed thousands of miles from home. Stranded in Kolkata, he fights to survive starvation, language barriers, and even child trafficking, eventually being adopted by a wonderful husband and wife in far-away Australia. Years later, Saroo, in his late ’20s, is desperate to find his birth mother and brother and put closure to the wounds of separation, and with the aid of Google Earth, that becomes a real possibility.

I was instantly sucked into this story. Some directors might have catered to English-speaking audiences by choosing to narrate the scenes from Saroo’s childhood, or to even show all of those events in flashback, narrated by an adult Saroo in a film focused on the grown man as the main character. About 30 minutes into the story of this young boy, I found myself guessing that we would be cutting away to present day soon. But I finally realized that the director cared more about what we were watching than to reduce it to segmented memories.

The story is patient, patient in ways that films like The Black Stallion are. I can remember, during my only viewing of The Passion, the feeling of being thrust into a story and forcibly prodded along behind Jesus through his trials. I had no choice but to follow behind him and take part in the events that ensued. This film also thrusts you into the story. The lands and cultures are unfamiliar to most of us, but they are breathtakingly beautiful. The cinematography is direct and intimate and revealing, yet full of mystery. As Saroo finds himself lost in Kolkata, even he cannot understand the languages being spoken to him, and we too feel lost and vulnerable. It doesn’t hurt the film at all that the young boy playing Saroo is one of the most adorable and believable child actors I’ve ever seen. He makes you want to reach into his world and scoop him up and save him. 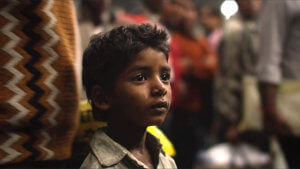 There are beautiful messages of family bonds, both by blood and by adoption, and wonderful scenes depicting love and kindness where vocabulary is absent.

It’s woven together like good fiction, but made even more powerful by the knowledge that it is not.

And though I now know the theater was packed with moviegoers come to see an Oscar-nominated hit, for Gina and I, unaware as we were, this was the refreshing and deeply moving sleeper we had hoped for.