Five years ago, Russ Ramsey almost died. A bacterial infection found purchase in the mitral valve of his heart and chawed it to a fare-thee-well. Describing the sonogram in which he saw the inner workings of his own heart, Russ wrote that his mitral valve, in contrast to the tight little doors of the other three valves, “looked like two pieces of spaghetti flapping around with no apparent purpose or design.” Surgeons at Vanderbilt University Medical Center sawed open Russ’s chest and repaired the valve. After the surgery, Russ survived a minor stroke, an opioid fog, cardiac rehab, and depression. He slowly regained his strength. But he has never been the same.

Russ tells the story of this perilous journey in Struck: One Christian’s Reflections on Encountering Death. It was all a shocking and most uncommon series of events for Russ and his family and the rest of us who love him. Nevertheless, Russ writes in the first chapter of Struck,

It is not the uncommon part of our suffering I am drawn to write about. I want to explore the common experiences afflicted people share—the onset of a sense of frailty, the fear, the grief, the humor, the routines, the new ways of relating to people who love us and are afraid for us and for themselves.

Indeed, suffering is one of the most common things in the world. Those of us who aren’t currently suffering have either recently come out of suffering or will soon be headed into it. That’s why Struck is such an important book.

When I first learned of the severity of my condition I felt afraid, of course. But the prevailing sensation wasn’t fear. It was wonder—curiosity, even exhilaration. I felt that I was at the beginning of a great adventure—one I instinctively did not want to miss.

Struck awakens that same curiosity and wonder in the reader. This isn’t a book of advice, nor is it a book that draws simple and obvious lessons about a sick heart in need of repair by the Great Physician. (To the contrary, in this book Russ asks such questions as, “What if it was God who broke my heart?”).

No, this is a book about paying attention. “Seeing through my suffering won’t show me a new world,” Russ writes. Rather, it will show me more of the world I think I know.” That’s what reading Struck is like. Like all great writing, Struck shows us more of the world we think we know.

I had been my whole life a bell, and never knew it until that moment when I was lifted up and struck.

Russ wrestles honestly with his suffering—not just the physical pain and peril, but the doubts and fears, the relational difficulties, the depression, the death of a friend who declined even as he recovered—and he doesn’t let go until he gets a blessing. Then he bestows that blessing on the reader.

The title Struck comes from Annie Dillard: “I had been my whole life a bell, and never knew it until that moment when I was lifted up and struck.” As Russ beautifully demonstrates, to be struck by suffering is not only to be stricken, but also to be struck like a bell, resonating at the frequencies of a world we cannot see. 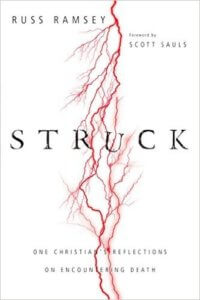 When we face affliction, we typically hope for a recovery so complete that in retrospect, after we have returned to normal, our suffering will seem no more than a bump in the road or a blip on the radar. Struck makes a convincing case that returning to normal is a pretty paltry hope. In our suffering, let us hope instead for transformation.

Early in his ordeal, Russ wrote, “I cannot help but think that perhaps my life, up to this point, has taken place in a kind of womb from which I am about to be delivered.” Can it be that suffering births us to newness of life? Can it be that it is God who breaks our hearts?

For those of us who love Russ Ramsey, it is obvious that his recovery from affliction has not been a return to normal. He has been transformed by his suffering and by his recovery. God is doing a new thing in Russ, and Struck is one of its first-fruits.

[Struck is available in the Rabbit Room Store.]