I’m so pleased to let you know that David Taylor will be our Hutchmoot keynote speaker.

I met David last year, thanks in part to the famous (infamous?) video he produced, featuring a conversation on the Psalms with Bono and Eugene Peterson. I wrote a response to that video that created some more conversation, and next thing you know I was on a panel led by David, along with Charlie Peacock (!) and Ashley Cleveland (!) here in Nashville. David and his lovely family came over to the Warren for tea the next day, and I went from being a fan to having made a new friend. 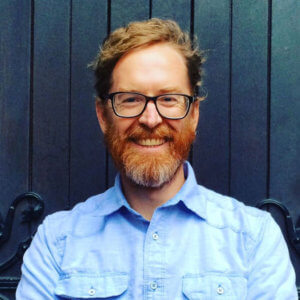 Not only is David brilliant, but he has one of the sweetest spirits—and heartiest laughs—I’ve ever shared a room with. David came to one of our Texas shows on my Edge of Dawn Tour with Audrey Assad this spring, and I sort of made a fool of myself. I asked him if he’d be willing to come and speak at Hutchmoot, but told him I wasn’t sure if he did that sort of thing. I knew he was smart. I knew he was a professor. But did he do keynote-type stuff? I hadn’t found anything online in my quick search, other than his academic accomplishments—his formidable academic accomplishments, I should say. David, bless his heart, literally blushed and fumbled for a second before telling me, “Yeah, that’s basically what I do.”

He texted me the next day, after I apologized for my ignoramus question with this:

Hey no worries, brother. It didn’t bother me at all. I don’t tend to feel comfortable tooting my own horn, and I don’t put my CV on my blog, so it’s not surprising that you wouldn’t know any details about my public speaking habits. It’s all good. But I do enjoy the experience, and I’ve enjoyed the challenge/opportunity to speak to different sorts of groups: seminaries, colleges, churches, conferences, retreats, small groups, small closets full of hermits, etc. ???? My topics tend to revolve around vocation and the arts, spiritual formation and the arts, theology and the arts, worship and the arts, culture and the arts. My latest avocational interest is in science fiction and the Christian faith. It’d be an honor and a privilege to speak at Hutchmoot.

How could you not love that guy?

Here’s what the Fuller Seminary website says about him:

David Taylor joined the Fuller faculty in 2014 and is an assistant professor of theology and culture as well as the Director of Brehm Texas, an initiative to revitalize the church through the arts. Prior to his appointment at Fuller, Taylor served as a pastor for ten years in Austin, Texas. Born and raised in Guatemala City, he has lectured widely on the arts, in both academic and popular settings, from Thailand to South Africa.

An ordained Anglican minister, Taylor edited the book For the Beauty of the Church: Casting a Vision for the Arts (Baker Books, 2010), serves on the advisory board for IVP Academic’s series, “Studies in Theology and the Arts,” and leads an annual retreat for ministers to artists at Laity Lodge in central Texas. His most recent project was producing Bono and Eugene Peterson: THE PSALMS.

I’ll say it again. How could you not love that guy? We’re so honored that he’ll be joining us.

Today, Fuller Studio (the platform that produced the original Bono/Eugene conversation) released five more clips: an extended conversation between David and Bono about the Psalms, Jesus, and the arts—which made me an even bigger fan of both David and Bono. You can watch all the videos here, but this is one of my favorites.