Batman’s origin story is full of darkness. Orphaned as a child, taking on a the mantle of a bat to fight crime in the dark of night – no wonder he only works in black (or sometimes, very very dark gray).

Maybe this is just another instance of trying to compare myself to Batman, but I also have an origin story that set my approach to color.

I am a cartoonist today because of Charles Schultz. I spent most of my childhood reading and re-reading books full of Charlie Brown and Snoopy. I loved the world that lived inside those panels—the distinctive characters in funny poses, the way the story was doled out frame by frame—I didn’t realize it at the time, but I was training my brain to speak comics.

In time, Peanuts was joined by two other comic masterpieces: Calvin and Hobbes and Pogo. All three comics used their bright color Sunday pages beautifully, but it was those black-and-white daily pages that drew me in. I gobbled up one after another like… well, like peanuts.

So that’s how I became a black-and-white cartoonist. I’ve grown to read, re-read, and love many styles and formats of comics, but those three comic strips are still my first love (I re-read the entire run of Calvin and Hobbes every year or two). That focus on minimalist, cartoony rendering, line and silhouette has informed all my drawing… until now. 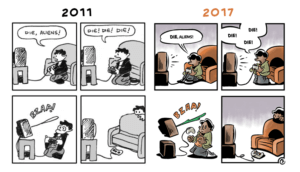 The story of why I’m rebooting my old webcomic Getting Ethan is one that I’ll discuss in a separate post, but it really fired me up. My drawing style has only really gelled in the past two years or so, so it has been a joy to recreate this world the way I see it in my head.

And color! I’ve always been preoccupied by line art, but that extra step of adding color is giving the comics that extra pop I’ve always looked for, and I there’s a satisfaction in a finished, colored page that makes me feel more energized, not less.

I’m excited to do the same for Martin and Marco. 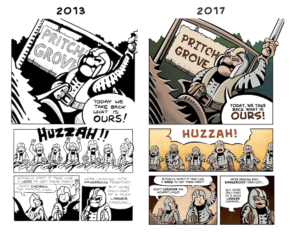 My first book, Martin and Marco, has been sold out for several months. And my readers are not happy about it. I’m not happy about it. I want to bring this book back in print—but I also like the idea of bringing it up to the level that digital illustration has helped me to achieve in more recent comics.

Enter Patreon, which I’ll be using to help support my current comics and save up for a Martin and Marco reprint. I love this idea for three reasons:

Check out the Patreon campaign and share with your friends—there are lots of great rewards available at different levels (including an entire ebook every month) and we’ve already broken through our first goal (two pages per week)! I have many more rewards and goals planned as the Patreon—and subsequently, my comics output—level up!

Me and color. It’s good to be friends at last!