When you write a book it becomes somehow precious to you. Precious in the way that a child is precious.

Okay, not quite that precious.

Still, your story is a creation you’ve lovingly incubated for months (or years), a thing you’ve painfully labored to bring into the world. It represents a huge investment of time, care, prayer, thought, emotion, hope, and fear. You’ve battled hard against doubts and gravities both internal and external, suffering as many defeats as victories before taking this final hill at last, before triumphantly clutching this finished manuscript to your chest in a rush of wonder and disbelief.

And then comes that trembling moment when you hand it off to an illustrator.

It feels as if you are voluntarily giving your new baby into foster care.

Okay, not quite that heartrending.

But still, there’s the lingering fear that this thing you love might get dropped on it’s head.

So when one deposits one’s story in the ink-stained arms of an illustrator whose own distinct vision will now be brought to bear—ultimately leaving an indelible imprint on every reader’s experience of the book—one makes such an exchange with a very sober and a very real trepidation, aware that this situation could easily go very wrong.

When it came to my first book, The Angel Knew Papa and the Dog, I had decided several years ago that if I were ever in a position to put it back in print, I wanted to change a few things. Mainly, I wanted it to include several interior illustrations this time around, and also for the cover painting to have an entirely new feel and approach.

Some two decades ago, for the book’s inaugural printing, illustrator Ian Schoenherr took a straightforward, realistic approach. It was a well-rendered painting and many readers remain quite fond of that image for its old-school, adventure-tale rusticism (Russ Ramsey and Sara Masarik, you know who you are). I’ll likewise always have a sentimental attachment to that original cover, but this time around I wanted a quite different image that hinted at other nuances of the tale. 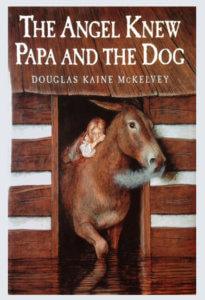 The Angel Knew Papa and the Dog is a frontier fantasy story of a journey through flood and miracle. It is a story of the coexistence of love and loss, of sorrow and hope. I had always imagined a cover illustration that suggested the spiritual struggle at the heart of the book, with maybe a visual nod to iconic images of the saints of old, and oh, by the way, I wanted it to somehow feel slightly fantastic and aesthetically current as well.

That shouldn’t be a problem, should it?

I mulled the work of several artists for more than a year, before settling on Zach Franzen. I didn’t pick him because of his Green Ember notoriety—though what he’s done with S. D. Smith’s book series certainly gave me confidence that he was an accomplished illustrator. Rather, when I enlisted Zach’s talents it was almost exclusively based on his nordic-inspired painting Freya. I saw something in the style, in the slightly elongated lines he used to create the human subject, in the colors and the landscape and sky as well, that hinted at a blending of something iconic with something fantasy-rimmed. 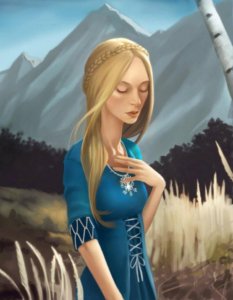 Even so, it took me the better part of a year to bring myself to the point of actually posting the downpayment and setting the collaboration in motion. In these matters, I tend to move slowly. I did not think I could afford, either financially or emotionally, to have this particular story baby dropped on its head at this stage of the game. The stakes were too high.

If the illustrations came back as a somehow uninspired or misinterpreted visual translation of the story, I would be stuck, without funds to hire another artist in the forseeable future, and probably without the stomach for it anyway. At that point I would likely have just relicensed the original cover image, and sadly reprinted with no interior illustrations.

So I was nervous. And fearful. But somehow, I mustered the courage to deposit my book baby on Zach Franzen’s doorstep.

Ah, Zach. Mighty brush-wielding benefactor and lord protector of innocent stories. My timid trust, as it turns out, was well placed. Zach proved himself mercifully adept at nurturing a tender tale. He swaddled my little story in cloths of brilliant colors and returned it to me beautifully enhanced and utterly unharmed.

I could breathe again. 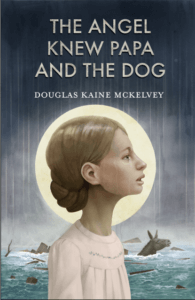 So why did this collaboration work?

And more broadly, what makes the difference in any successful artistic collaboration versus those that fail?

Undoubtedly there are many nuanced factors that might come into play, but I’m convinced it’s mostly about the ability, and the simple willingness, of the collaborator to enter into a creation that is not their own, and to find a way to translate it into a new language that is their own. Which is maybe the same as to say that you actually have to bring your full self to the project. And to do that, you actually have to care about the original piece. You have to foster a deep connection to it. You have to crawl inside it emotionally. You have to go to that daunting and dangerous place where you are actually risking something creatively, rather than just coasting on the rote mechanics of your craft, phoning in something that’s passable (but that doesn’t add any new layer of richness to the original vision). At the end of the day, it can’t just be about collecting your paycheck.

The task of the artist is always to deepen the mystery.

In this case, Zach clearly absorbed the soul of The Angel Knew Papa and the Dog and sensitively and masterfully translated it into visual language. There was an initial level of trepidation on my part as Zach gently steered me away from the scene I envisioned for the cover, and towards a simpler, more elegant, and more poetic approach. But his instincts were correct. And after a couple of rounds of back and forth sketches and comments, I was convinced that his approach was actually truer to my vision for the book than my own notions had been.

I signed off on the concept and Zach went to work, rendering the cover painting more brilliantly than I could have imagined it, capturing the girl’s vulnerability and fierce courage in a composition that suggests hagiography but that also feels somehow retro-modern and contemporary.

But the interior drawings, which Franzen only recently completed, turned out to be objects of beauty in their own rights.  As an author, one always secretly hopes in these situations that the artist will not settle for merely illustrating the text, but will instead set out to make the project their own, moving beyond mere competence and into the realm of deep creation, yielding that visual poetry that has its own interior substrata of symbolic meaning.

And in the common parlance, Zach nailed it.

By way of example, take a look at the final interior illustration Zach created for The Angel Knew Papa and the Dog. 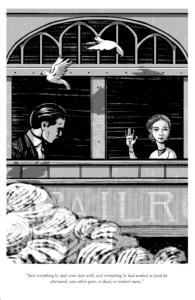 In this singular—and at first glance somewhat simple—image, Franzen inexplicably captures for us the movement and feel of the entire book; he suggests it in the contrasting postures and expressions of father and daughter, of the grief and the hope, in the insinuation of farewells and in the sense of the rush of movement forward into the days yet to come. In these things he lays before us the soul of what was written.

But he doesn’t stop there.

He expands on the theme, bringing his own symbolic language to the work.

Pay special attention to the design of the train window casing.

Pay special attention to the birds on wing.

Those are his own creations, never mentioned in the text.

And yet, what Zach is getting at by placing them there—father, daughter and birds within the frame of a train window that looks like it might also be a stained glass church window—what he is getting at there is a rendering of the whole beating heart of the story. It is the mysterious presence of the divine and of grace somehow manifest in our hard journeys. It is the baptism of our suffering, made more powerful by a sublimated symbolism.

Franzen’s art is, in his own words, a way of seeking to practice “hospitality.” It is about laboring to create something that will be of benefit to the recipient. It is about “displaying the beauty of truth.” It is about creating a good space to welcome others in to, where they might be nourished and cared for.

This is the reason I love collaboration and return to it even though there are times when it doesn’t turn out. It is because other people can see things I cannot. They can translate into languages I can read but cannot write. They can add new layers of their own mysterious making so that a thing I’ve conceived becomes more than what it was when it was in my hands alone; more beautiful, more wonderful, more truthful, more hospitable.

The task of the artist, George Orwell stated, is always to deepen the mystery.

In all of our collaborations, let us always be reaching for that.

Let us always be bringing our full selves into our shared works.

This is, after all, a collaborative venture from beginning to end; this life, this building of the kingdom, this attempt to establish a colony of heaven on the remote outpost of earth. We are all collaborators in the truest, largest sense, laboring collectively in the service of the same eternal vision, in the service of the redemption of all things. Each of us shepherds our own distinct vision of how to pursue that goal, and each of us are forever dependent on our co-laborers if we are ever to bring such visions to fruition. And that larger collaboration, I think, is the context in which we should always be working through our smaller creative collaborations.

[The Angel Knew Papa and the Dog is available for pre-order in the Rabbit Room Store.]

Doug participated in the early work of Charlie Peacock’s Art House Foundation, an organization dedicated to a shared exploration of faith and the arts. In the decades since, he has worked as an author, song lyricist, scriptwriter, and video director. He has penned more than 350 lyrics recorded by a variety of artists including Switchfoot, Kenny Rogers, Sanctus Real, and Jason Gray. His newest book is Every Moment Holy (Rabbit Room Press). His other works include The Angel Knew Papa and the Dog (illustrated by Zach Franzen), The Wishes of the Fish King (illustrated by Jamin Still), Subjects with Objects (with Jonathan Richter), and Stories We Shared: A Family Book Journal (with Jamin Still).