Besides being a student at La Muncha Elementary School, Henry Penwhistle is an artist and a knight-errant. Henry and the Chalk Dragon, Jennifer Trafton’s brilliant new novel for young readers (and anyone who has ever been a young reader), demonstrates just how much the artist shares in common with the knight-errant. Both artists and knights-errant have to face their fears every day. They have to buckle on the armor and sally forth into the world to pursue a calling.

Henry’s armor is a raincoat he has covered with tinfoil; in the inner lining he has scrawled various rules of chivalry, lest he forget:

Be brave.
Fight for the right.
Don’t feed girls to dragons.

That last rule proves to be especially important when a jungle-green dragon enters Henry’s life and begins to wreak havoc. The dragon starts out life as a piece of art work—a large chalk drawing that Henry has drawn on his bedroom door. But as great art tends to do, the dragon takes on a life of its own, beyond the control of the artist. When Henry’s Chalk Dragon comes off the door and into the three-dimensional world where Henry lives and moves and has his being, all hell breaks loose at La Muncha Elementary, heretofore the Safest Elementary School in the County. 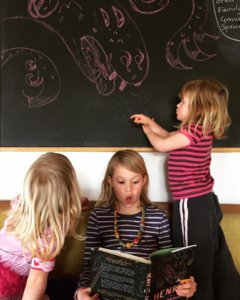 The power of Henry’s artistic gift terrifies him. He tries to get his dragon under control, but there’s no putting that genie back in the bottle—or, in Jennifer’s much fresher image, “it was like squishing the white fluffy explosion of popcorn back into the kernel again. The Art was out, and it would not go back in.” That kind of inventiveness and verbal energy, by the way, is everywhere in this book. Jennifer’s exuberance is child-like without being childish or talking down to children.

The Chalk Dragon has chosen an inconvenient time to hitchhike to school in Henry’s lunchbox (it is a shape-shifting dragon, so it can do that). It’s National Vegetable Week—a celebration that is duller than it sounds—and Miss Pimpernel’s class is working hard to finish their group project to commemorate the week: a cardboard box covered with identical bunnies munching identical lettuces, all cut from the same pattern and colored with the same crayons. Quite apart from the dragon trouble, Henry struggles with what you might call artistic differences. When he tries to trace his bunny’s ears, his crayon turns the bunny ears into a space helmet. When he tries to draw the fluffy bunny tail, all he can see is jet flames shooting out from behind. The Chalk Dragon, in other words, is but one expression of Henry’s inconvenient inability to conform.

Henry is surrounded by adults who try to make him conform—adults who value safety and stability (and all of whom, it turns out, have their own history of youthful exuberance). When Henry is hauled into Prinicipal Bunk’s office, he gets a speech on the importance of taming his imagination:

Do you know what tame means, Henry? It means under control. Think of it as the opposite of a lion—something safe enough to keep in your house and pet between the ears, like a kitten—or a bunny! Imagination is a wild animal, like an alligator, or a shark, or a polar bear. And do you know what the problem with wild animals is, Henry? They make messes! So untidy. So unpredictable. You must keep that imagination of yours on a leash at all times.

But Principal Bunk doesn’t know the half of it: by the end of the day, Henry’s imagination, embodied in the jungle-green dragon lurking the halls of La Muncha, will utterly wreck the Safest Elementary School in the County. In a good way.

Perhaps more interesting than the outside pressures faced by Henry the schoolboy-artist-knight are the inward pressures. He lives in a constant battle between his imaginative exuberance and his fear. On the inside he is a dragon-master, but on the outside he is still a little boy who finds it hard to navigate a world that doesn’t understand him.

Dragons aren’t scary—well, they are, but they’re a good kind of scary. They’re the kind of scary you want to be scared of. People are the bad kind of scary, he thought. Dragons can only eat you, but people can laugh at you, and that is like being chewed to death by a smile.

“Be brave,” the inner lining of Henry’s armor tells him, and as his tumultuous day progresses, he gets braver and braver. He has the help of his best friend Oscar (“If life were a drinking straw, Oscar would be the paper wrapper soaring off the end”) and his new friend Jade, a bard who chronicles his quest in clever spontaneous verse. He also has the help of a bus driver-philosopher who names him (“Henry, you are a talented artist”) and protects him from the philistines who torment him on the bus.

By the end of the day, our artist discovers that great art requires not only bravery, but also kindness and community. As we say at the Rabbit Room, community nourishes art and art nourishes community. Henry’s bus driver-mentor puts it best:

One of the most remarkable things about Henry and the Chalk Dragon is that it is addressing the very same, very difficult questions as books like Bayles and Orlund’s Art and Fear or Stephen Pressman’s The War of Art, but in ways that are accessible to a child. This book, like those other books, gives me courage and makes me want to sit down and make something.

Henry and the Chalk Dragon is an act of bravery and kindness on Jennifer Trafton’s part. May it go forth and wreak havoc.