During my time at seminary I became enamored with the lives of the saints. Perhaps “enamored” comes across the wrong way—my Protestant roots run deep enough that I’m wary of turning anyone or anything into an idol (I’ve seen my fair share of hero worship in every denomination—but that’s a different story).

What I mean is that I’ve come to realize our need to drink deeply of the stories, songs, and words written by and about fellow Christians—be they members of our local congregation, faithful followers of Jesus across the globe, or those separated from us by time and death.

The best of the saints’ stories (whether Catholic or otherwise) are those who nudge our gaze upward at the exact moment our eyes attempt to fixate on the saints themselves. These people are undeniably human and most assuredly sinners, and yet they are also creatures that have been touched by God’s grace and who are unable shake the glow of that encounter.

One such story is that of Charles Jennens.

I found myself at Fellowship Bible Church in Arkansas where I had worked for several years as a videographer before attending graduate school. 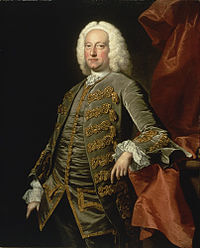 The congregation was gearing up for an arts festival. It was scheduled to take place in the Christmas season and with the theme of “Messiah”—taking inspiration from the great musical work by George Frideric Handel. Of course, I had heard the infamous “Hallelujah Chorus” used (and abused) by dozens of films, television shows, and commercials, but I soon learned that I knew little about the rest of this famous work.

The leader of the worship team had purchased several books on the subject and I checked out a few from his office. I found that although the work is primarily referred to as Handel’s Messiah, there was another man who was instrumental to the work’s creation. This lesser-known individual was the impetus for the work and convinced Handel to join him in it. His name was Charles Jennens.

Jennens had worked with Handel before on an oratorio about the relationship between King Saul and his eventual successor, the shepherd boy David. Jennens was not a professional musician—in fact, he was not a professional anything based on our modern definition. He was a wealthy landowner well versed in music, literature, and the Christian scriptures. His primary area of expertise was William Shakespeare but he lacked credentials and approval of other scholars in the field.

It would be closest to the mark to call him a benefactor or a patron of the arts but only if it’s made clear that Jennens was not simply a man with a lot of money looking for a way to spend it. He doesn’t fit the stereotype of an aloof millionaire who cuts checks for artists for the sole purpose of sharing in the accolades while maintaining distance from the work itself. On the contrary, Jennens was passionately involved in the artistic process. Yet he was also wise enough to know when to hand the work over to those whose gifts he admired and whose character he trusted. He would do this with Messiah.

Charles Jennens had experienced a personal tragedy when his brother, Robert, committed suicide. One of the reasons behind Robert’s decision, Jennens believed, was his association with the burgeoning philosophy of deism, which he encountered while studying at Oxford. This was during the height of the Enlightenment and deism was on the rise. Deism may affirm the existence of God (or at least of a sort of “unmoved mover” or “first cause”) but it denies God’s personal presence and committed activity within the present-day cosmos.

The purveyors of this doctrine may agree with Christian thinkers on several points but one finds that the claims of deism and classic Christian orthodoxy are ultimately at odds. One cannot affirm a hands-off vision of God while continuing to look to the accounts of Moses, Isaiah, or, above all, Jesus as the ultimate source of truth. I would argue that the fixed chasm that stands between Christian teaching and deism is ultimately wider than the gap between deism and atheism. Charles Jennens perceived a deep emptiness embedded at the heart of this philosophy and he sought to refute its claims. Yet he did so in a surprising way.

Christian history is full of brilliant men and women who, armed with the tools of reason and rhetoric, have defended the faith from heresy. Jennens knew this; in fact his library was full of names like Chrysostom, Augustine, and Cranmer. Yet, faced with the mounting challenge of deism, Jennens did not produce a new commentary or attempt to publish a theological tome. Instead, he began to skillfully arrange passages from the Bible.

Yet just as astounding is the impetus behind the work—Jennen’s hope that the goodness and truth of the Christian scriptures would be more powerfully transmitted through beauty than through mere rhetoric.

Jennens pulled from various authors and books of the Bible to place the focus on the overarching narrative of scripture and its culmination in the person of Jesus Christ. His work was that of juxtaposition—not adding his own interpretations or elaborating upon the text but editing together the biblical text in a certain order for dramatic effect and narrative flow. The restraint he showed in doing so speaks volumes about his faith in the power and integrity of the Bible.

“Holy Scripture containeth all things necessary to salvation,” reads Article VI of the 39 Articles. As a communicant in the Church of England it’s very likely that Jennens knew these words well. Jennens put this particular idea into practice, trusting in Scripture to save his own age from falling into the trap laid out for it in deist doctrines.

Upon the completion of his arrangement, Jennens sent the manuscript to his friend and collaborator George Frideric Handel in hopes that it would be the composer’s next oratorio. Moreover, since this particular work was, according to Jennens, about the subject who “excels every other Subject,” his hope was that Handel would “lay out his whole Genius & Skill upon it, that the Composition may excel all his former Compositions.”[1]

In a world of back and forth arguments about the existence and eminence of God, Charles Jennens did not publish an essay or craft a three-point sermon—he asked the most talented musical mind of his day to create melodies for the words of scripture. He lifted verses out of the Old and New Testaments and trusted the power of art to give them new life in a world that had gotten used to ignoring them, a society which very much believed that it had moved on from such things.

Of course, Handel’s composition of Jennen’s selected scriptures would outlive the master composer and continues to be the most popular piece of music he ever wrote. Every Christmas and Easter you can almost guarantee that someone in your town will be performing the work and you can rely on the fact that filmmakers and marketers will continue to utilize the infamous “Hallelujah Chorus” anytime they want to convey an intangible sense of elation, wonder, and ecstasy.

Messiah is an astoundingly beautiful work, one that resounds across generations and illuminates the scriptures in a remarkable way. It’s almost as if, at times, one hears the ancient words in a new language—as if the music combined with the choir and soloists are producing a translation of the text itself. Yet just as astounding is the impetus behind the work—Jennen’s hope that the goodness and truth of the Christian scriptures would be more powerfully transmitted through beauty than through mere rhetoric. In place of arguments, Jennens produced an artful apologetic that stands the test of time and continues to touch the lives of those who experience it.

Christians in an increasingly pluralistic society could learn much from Charles Jennens. Like him, it would be wise for us to trust so firmly in the Bible. The scriptures contain a world of majesty—their words have transformed lives for millennia and will continue to do so. Perhaps we, like Jennens before us, might begin to explore the power of art and beauty to guide our hearts and minds into goodness and truth. In a world full of rash arguments and rapid retorts, the wiser course of action may be to focus our energy and attention on the long and often quiet works of sowing justice, planting peace, sharing good meals, and creating good art.

One of the ways I feel called to make the case for the goodness, beauty, and truth of the Christian faith is simply by telling the stories of the saints—men and women who, like Charles Jennens, invite us further up and further into the fullness of God’s kingdom. I was part of crafting a short film about Jennens during my time at Fellowship Bible Church in Arkansas and it played before the performance of Handel’s Messiah during the opening night of Fellowship’s arts festival.

I hope you take the time to watch it and that it brings you as much joy as it brought my collaborators and I to make. Most of all, I hope that as you watch it you feel that Charles Jennens would not have you rest your gaze upon him but would instead invite you to raise your eyes heavenward in wonder at this beautiful world and the One who made it thus—the One who works even now to bring it to perfection.