Balaam’s Donkey Comes to Rural America: The Angel Knew Papa and the Dog

I have always loved the Bible story of Balaam’s donkey (from Numbers 22). On the one hand, it’s a folksy, earthy, homey story. On the plains of Moab, a man has trouble with a stubborn donkey. Man beats donkey. Donkey talks back. Man and donkey get into an argument. Donkey wins argument. Told that way, the episode sounds more like a folk tale or a joke than a Bible story. And yet, swirling around this homespun story, and driving it along, are huge forces—prophets, kings, political intrigue—and, more to the point, cosmic forces with eternal consequences—the anger of the Lord Almighty, an angel with his sword drawn, a false prophet who cannot help but tell the truth. 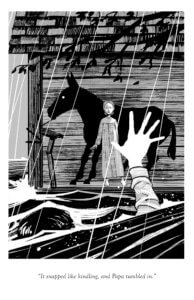 In his novella The Angel Knew Papa and the Dog, Doug McKelvey brings the story of Balaam’s donkey (a version of it, anyway) to rural America. Above this folksy story about a farm girl, her father, a dog, and two mules, great cosmic forces swirl. When their quiet life is torn apart by a flood, the mysterious workings of Providence and a shining angel brood over the chaos of the roaring waters. Frontier America may be the other side of the world from the plains of Moab, but still, it’s the same world. The angel that appeared to Balaam and his donkey could just as easily appear to an American farm girl and a mule named Thaddeus Frisco.

That farm girl is the narrator of The Angel Knew Papa and the Dog. Her voice—both thoroughly American and also steeped in the imagery and language of the Bible—is a big part of what makes The Angel Knew Papa and the Dog so appealing. She makes sense of the events she narrates in terms of the stories her father has read to her beside their cabin hearth. Her baptized imagination gives her eyes to see what has been true all along.

The Angel Knew Papa and the Dog was originally published in 1998 by Penguin. It has now been re-released by Rabbit Room press in a paperback edition beautifully illustrated by Zach Franzen. You can get your copy at the Rabbit Room store.