The Adventures of Fenigus March

This year I started a project called The Adventures of Fenigus March. It will be a series of paintings with accompanying one-page short stories that will eventually be put into a book.

The stories take the form of journal entries made by the intrepid collector Fenigus March as he explores the Islands and finds and doesn’t find what he’s looking for. My goal is to use the adventures to slowly reveal the true (and unexpected) nature of this fictional world both to the reader and to March himself. So it’s kind of a mystery/adventure/picture book. The closest thing I can compare it to is Griffin and Sabine, but even that isn’t a great comparison.

Anyway, here’s the shot-by-shot process of the first painting. It’s called “The Tree of Life.”

First, I used white chalk to sketch the crow and the tree and the fruit and the leaves on a canvas painted black. 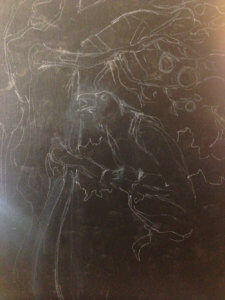 Then I got to work on the tree. I love painting bark. This takes place in early morning, so there’s low blue light raking in from the left. 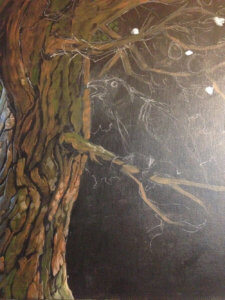 Here are some bark details. And the faint beginning of leaves. 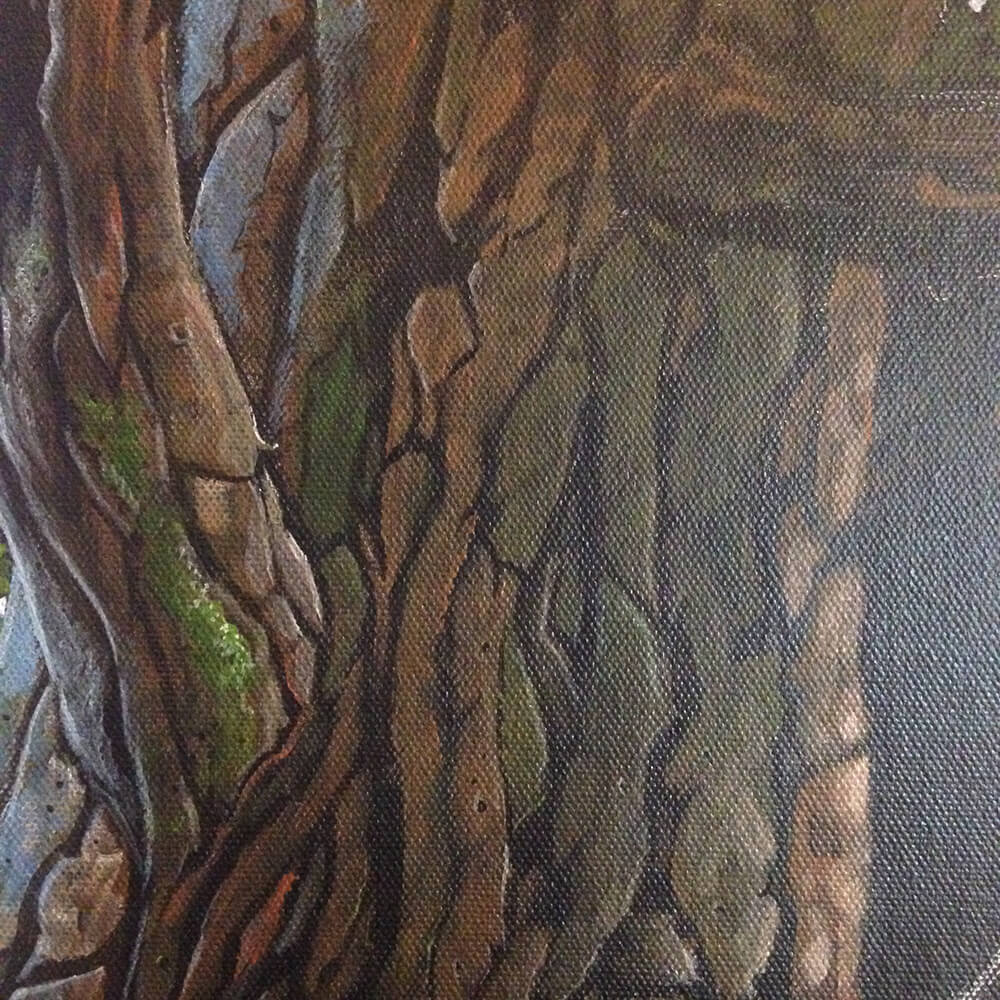 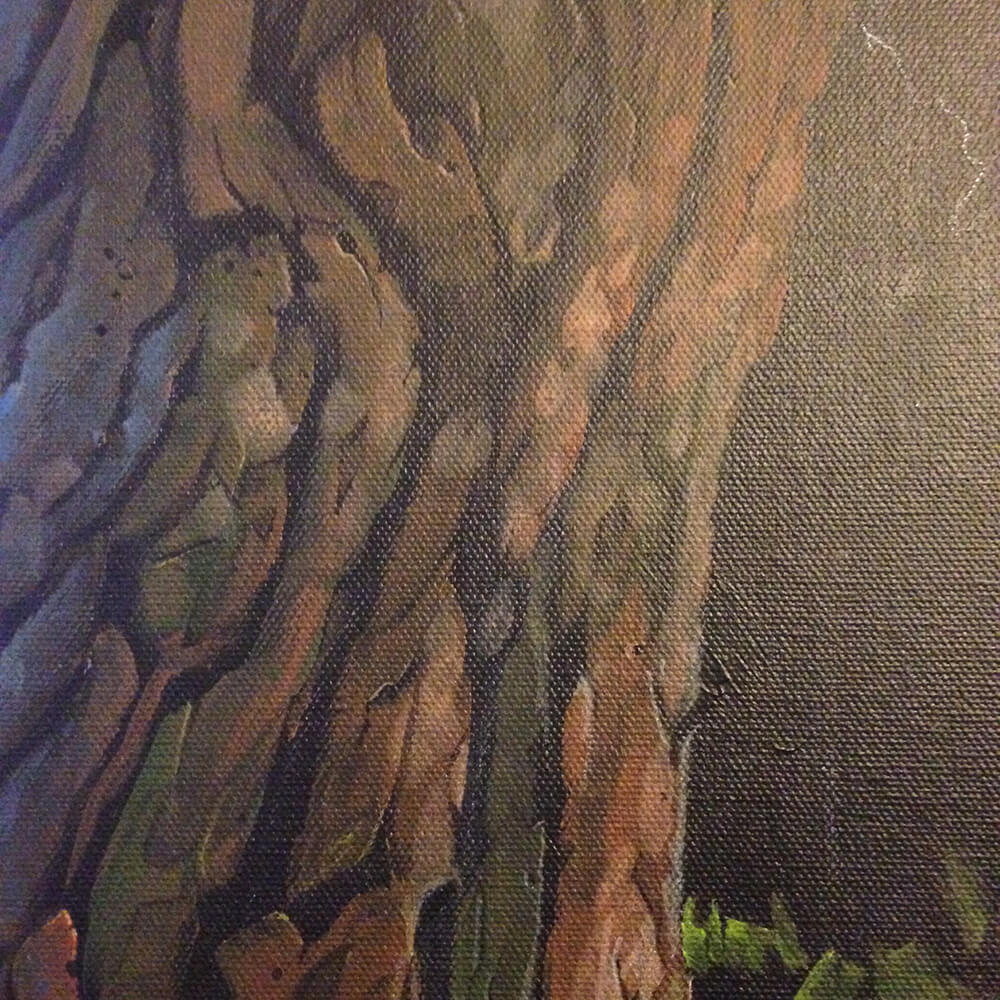 At this point I realized the perspective on the crow isn’t what I wanted. So I redrew him. 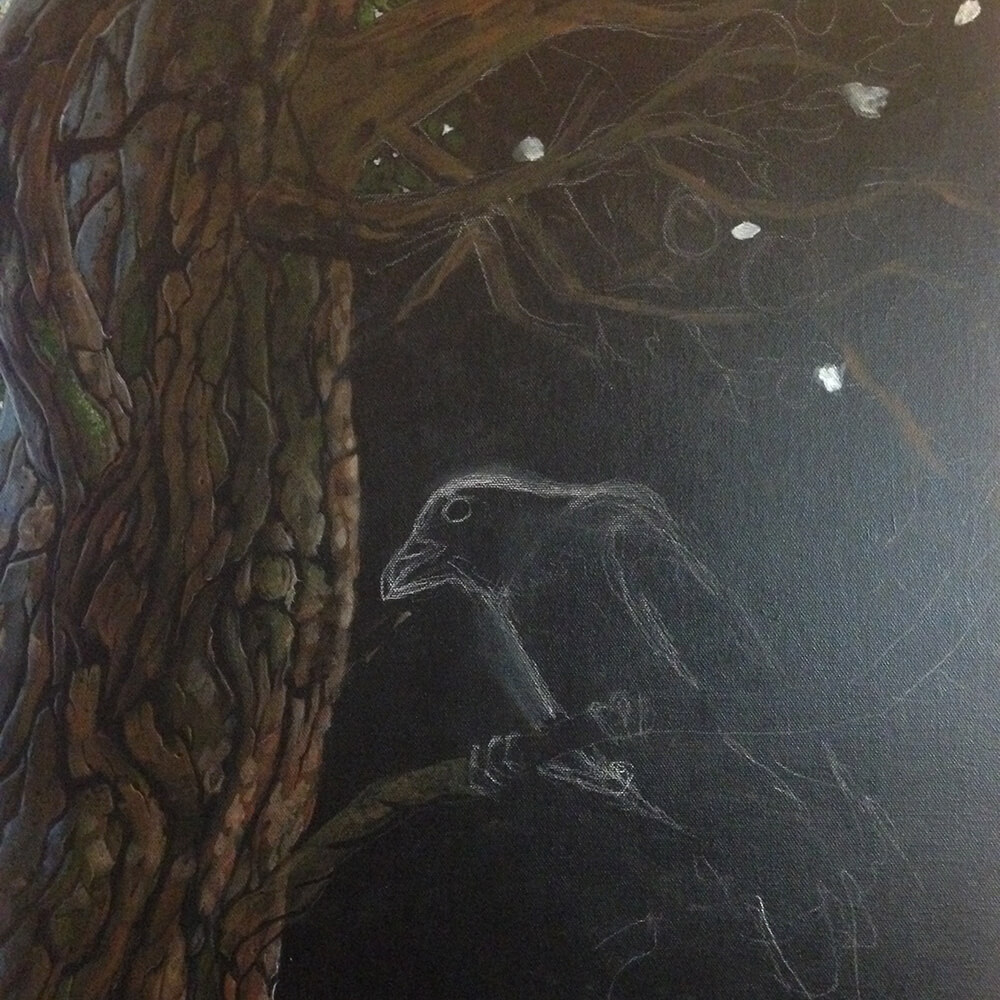 Then I painted in the leaves and sky. I didn’t change the bark color – that’s just different lighting. 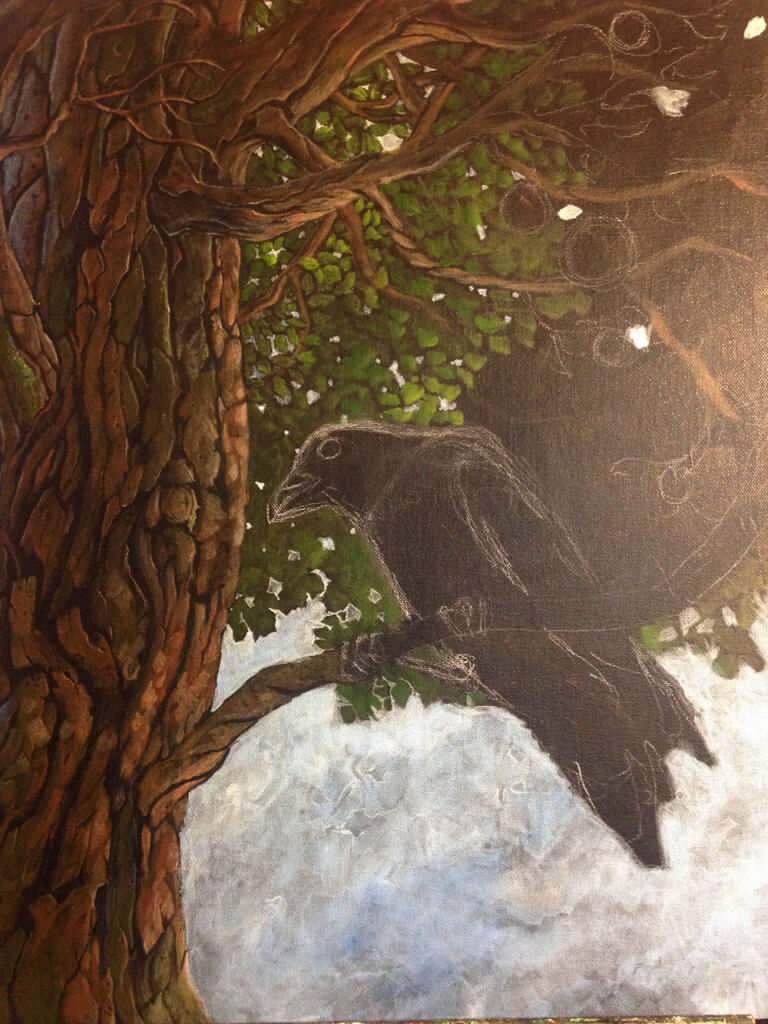 Then I did the fruit. It’s supposed to glow, so you see its reflection on the branches and leaves. 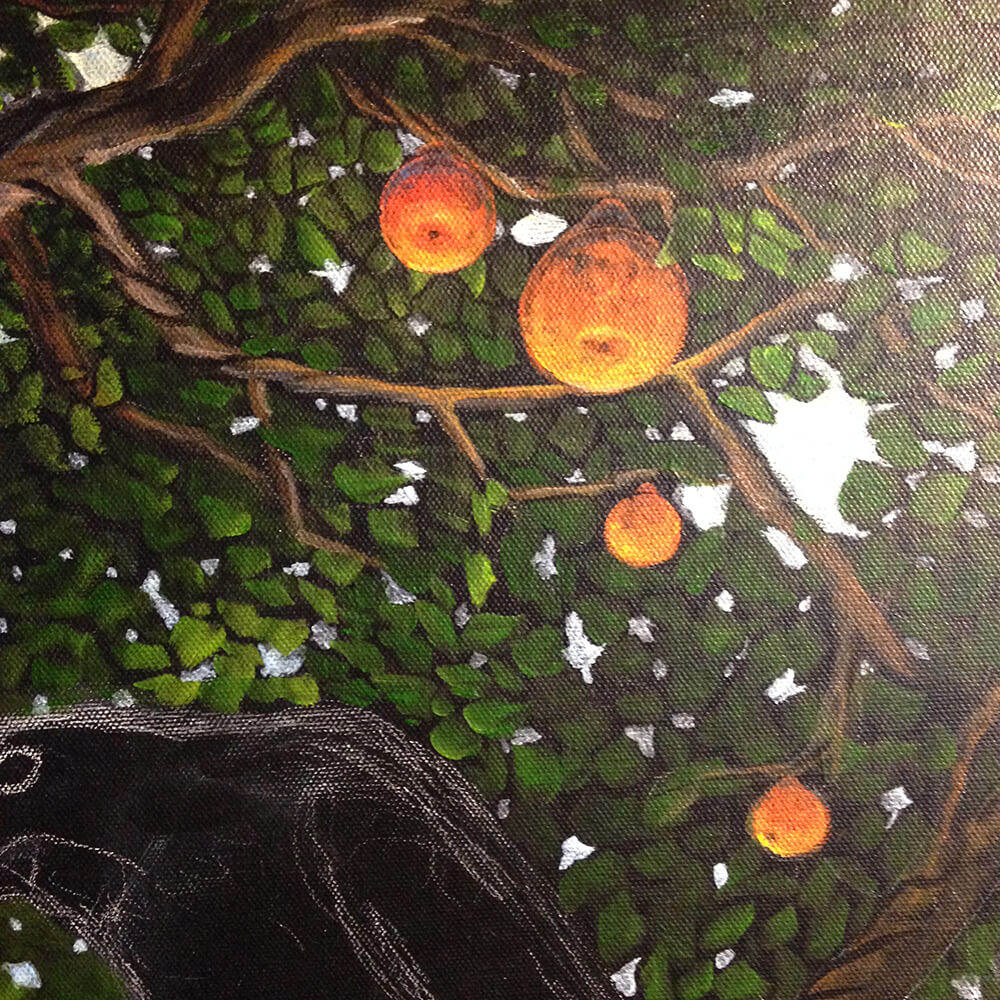 Finally I started working on the crow itself, adding different colors as I shaped his body. 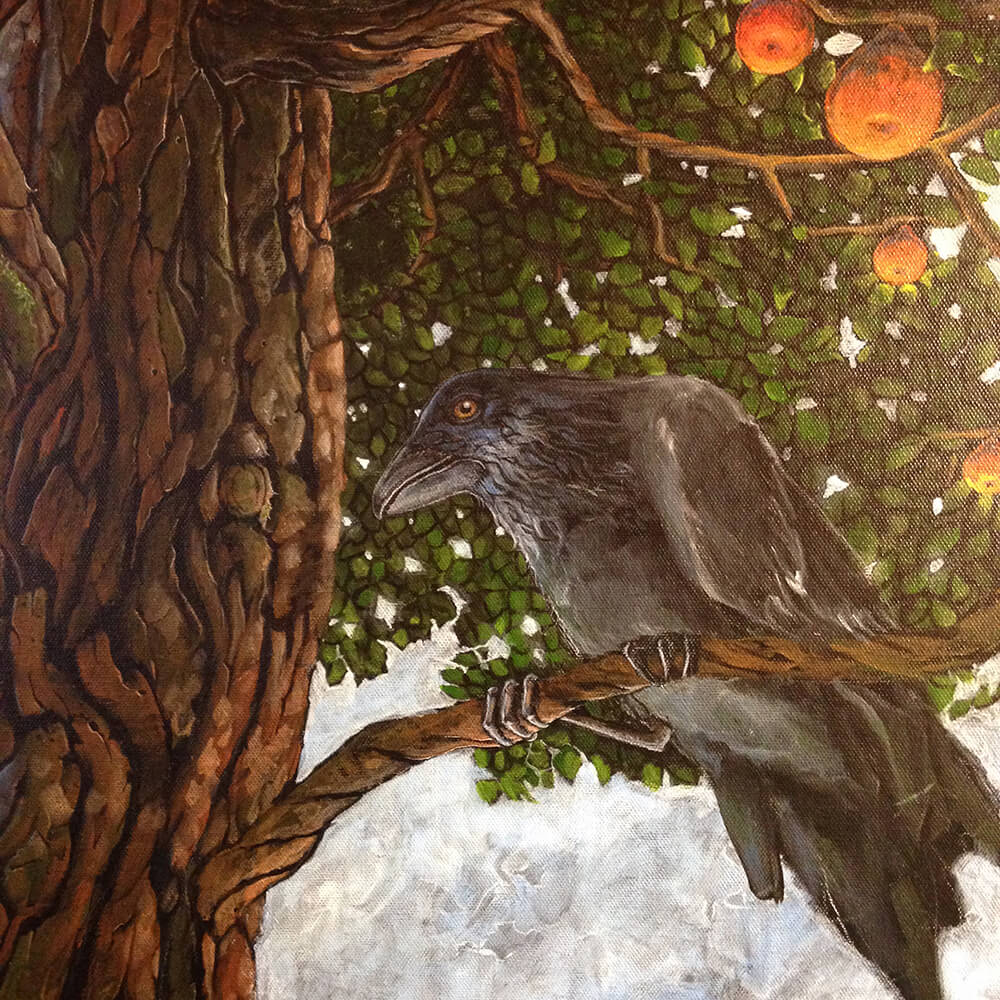 Next I realized the sky was pushing forward too much, so I darkened the sky and made it earlier in the morning. I continued working on the crow’s plumage. 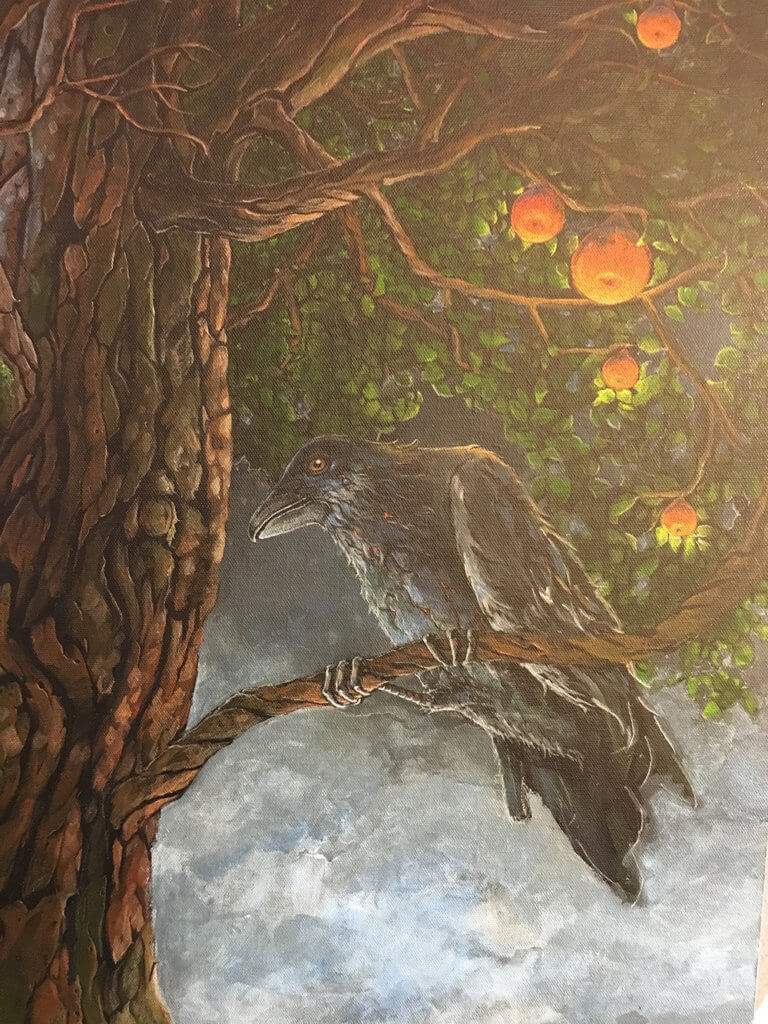 To finish the painting I added some fruit peels and a half-eaten piece of fruit. And stars. And then I photographed it with a real camera. 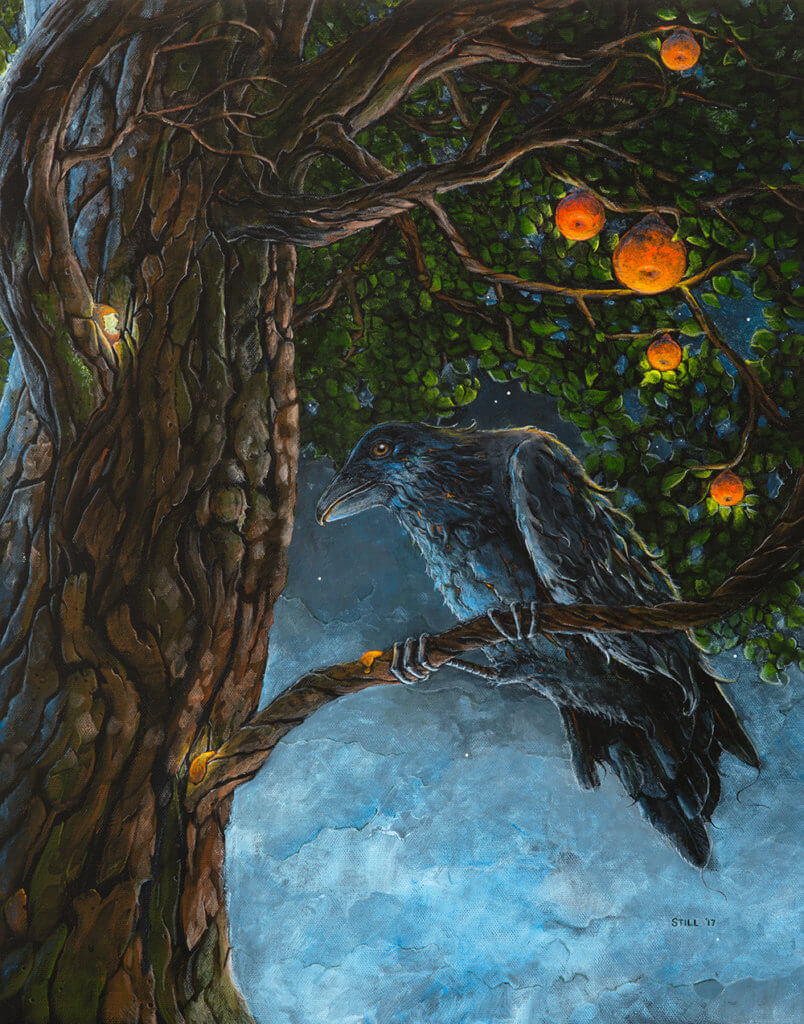 Look for more posts on this evolving project!

Jamin has always enjoyed illustrations and images related to stories. As a child, he drew and painted and continued to pursue art through high school and college. He attended Wichita State University where he earned a degree in art history, painting, and English literature. Since then he has focused on developing illustration and story-related imagery. His goal is to bring the viewer to a place of wonder and possibility. His picture books, Ellen and the Winter Wolves and The Wishes of the Fish King, are a beautiful witness to his many talents.