Well friends, I’m about to go all academic on you – or at least as academic as art, story, song obsessed me can get – by giving you a taste of what I’ve been working on in the past couple of years. I yearn to write here, to have time to work out more creatively the ideas I’m discovering academically. That will come –  and this season of study is so rich. But I hate to leave a static silence, so I’ll let you see where my curiosity has been roaming in the past year. (And you can pray for me as I study for my exams – three more weeks!)

This essay was one from last year in which I looked at different models of atonement theology through the lens of art. I will admit, I have combined theology and art or literature in as many of my essays as I could because I so believe in the imagination as a ‘truth-bearing faculty’ (thank you, Malcolm Guite). I deeply believe that theological truth can be encountered and known in a ‘language without words’, and the power of this shapes us in a further and different way from doctrinal statements alone. In art, story, or song, we are given the chance to see theology afresh, to encounter its power and beauty in image.

So. It’s a bit technical. But I’ll work it out someday in poetry and story too. Let us begin:

In the opening to his book on the subject of beauty as ‘a category indispensable to Christian thought’, David Bentley Hart observes that ‘the church has no argument …more convincing than the form of Christ.’ Hans Urs von Balthasar echoes this by describing the ‘beauty’ of the Cross, noting that it is ‘unbearable’ to a worldly aesthetic.[ii] Yet one of the primary ways that the Cross has been presented throughout history is in countless works of art, created both for the sacred realm of church, and the wider arena of culture. That these works of image and imagination are also ‘arguments’, able to communicate theological truth, is where this essay begins. For as John Ruskin, the great art critic observed, ‘great nations write their autobiographies in ‘their deeds…their words… and the book of their art…and the last is the most trustworthy’[iii].

Replacing ‘nations’ with the institution of the Church, this essay will open with a brief exploration of the way in which the form of Christ is presented in the autobiography of its art, presenting both theological claims and the history of the Church in a language without words. Our specific focus will then turn to artistic depictions of Christ’s death, and the theologies of atonement that they embody. We will survey major models of atonement theology, using this basis to explore what two specific pieces of art communicate regarding the death of Christ. The pieces of focus will be the ‘vine cross’ mosaic in the apse of the church of San Clemente, in Rome, and a lithograph by Walter Spitzer, created as an illustration for the French writer Malraux’s novel, La Tentation de l’occident (The Temptation of the West).

To open, we must briefly examine the validity of art as a means of theological communication. In a modern context shaped by Enlightenment empiricism, truth, even theology, is commonly regarded as the transmission of objective statements that can be analysed and argued. This concept of knowing is one that grew concurrently with the scientific age, in which materialism and objectivity moulded our understanding of knowledge as something observed and quantified. But as postmodern theory, not to mention theologians like Rowan Williams, Hans Urs von Balthasar, and generations of our ancestors would instantly recognize, some knowledge cannot be reduced to stated information. In evaluating the potential of art to communicate theology, we must first recognize that truth can be present in a language other than words, whether of image, emotion, or experience.

In Richard Viladesau’s explanation, the communication of art is ‘nonverbal, but… not for that reason pre-rational or pre-spiritual’[iv]. Art can actually be ‘a way of thinking’[v] theologically in and of itself, allowing us a qualitatively different understanding via image and symbol from the knowledge gained by ratiocination. Jeremy Begbie says that ‘the arts give expression to a metaphorical way of perceiving the world… which reminds us there is always more to the world than we can name, control, and grasp’[vi]. Rather than standing apart from the doctrine we wish to understand, quantifying and describing it, we can look through a piece of art, gaining a ‘symbolic apprehension’ of ‘theological truth’[vii]. This immersive knowledge is precisely the alternate view that a piece of art can offer us as we look through its portrayal of Christ.

Gerardus van der Leeuw gives this theological shape with his assertion (quoted by Viladesau) that ‘a theological understanding of the arts must begin with soteriology,’ with Christ’s incarnational representation of God giving ‘art and religion their common essence as answers’[viii] or responses to the startling fact of the Incarnation. In this, one hears echoes of Tolkien’s idea that artists are ‘co-creators’, makers made in the image of a Creator, or the poet Madeleine L’Engle’s concept of the artist as participating in the ‘courageous obedience’ of Mary, mother of Jesus, becoming a ‘bearer of the work’[ix] at the request of the Holy Spirit. Both writers recognise that art shares in the incarnational task of Christ as He comes to live in all believers so that the believing artist can participate with the Holy Spirit in revealing Christ to the world.

The resulting multifaceted presentation of Christ powerfully conveys the reality that theology is not static nor wholly contained in one doctrinal system. In a mode profoundly different from stated truth, art allows us to ‘see’ the crucifixion through another’s eyes, enlarging our own perspective while helping us to recognise the limited nature of our view point when it remains in isolation. When centuries of artistic portrayals of the same theological event are set side-by-side, we immediately grasp the various ways in which the artists have seen this event, and the theological ideas shaping their aesthetic communication.

Art is thus inherently a portrayal of church history as well, enfleshing the doctrinal arguments and developments of the Church in the imagery of its devotional, architectural, and popular art. As witnessed in Richard Harries’ book examining ‘the passion in art’[x] through the centuries, artists of every age ‘could not avoid making a doctrinal point’[xi] in their works. The art of the catacombs, of church basilicas, or prayer books and privately commissioned paintings, is a unique record of theological debate and imagination. Art is thus uniquely suited to a discussion of differing theological viewpoints in that a picture offers a literally alternate point of ‘view’, not a differently worded or argued statement. We encounter their particular theological emphasis in the immediacy of image. 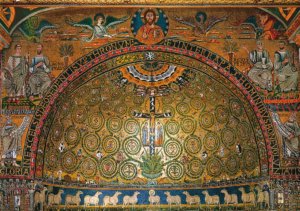 [iii] Ruskin, John St. Mark’s Rest: The history of Venice, written for the help of the few travellers who still care for her monuments, (Oxford: 1879), pg. vii

Sarah Clarkson is the author of several books including the best-selling The Life-giving Home, which she co-authored with her mother, Sally Clarkson. Sarah is currently studying literature at Oxford University where she's not only a brilliant thinker and writer, but is also the president of the C. S. Lewis Society.