If Steve Jobs Translated the Beatitudes

I can’t remember for sure how it started. I think I was just driving around in my car when a phrase suddenly came to mind: “Here’s to the weak ones…”
And those words must have reminded me of the first line of Apple’s iconic “Think Different” advertising campaign (“Here’s to the crazy ones…”) because all of a sudden I was imagining what it would have sounded like if Steve Jobs had translated the Beatitudes.

The “Think Different” campaign debuted in 1997. Print ads featured black-and-white photos of rebels and misfits like Bob Dylan, John Lennon, Muhammad Ali, Jim Henson, Albert Einstein, and many others. The TV spots, narrated by Richard Dreyffus, began with the memorable line, “Here’s to the crazy ones…” Here is that one-minute commercial:

If we imagine the Sermon on the Mount as the constitution for the Kingdom of God, the Beatitudes are its world-inverting preamble. Instead of trying to win favor with the religious, political, and moneyed elites, Jesus blesses the poor in spirit, the pure in heart, the grieving, the meek, the merciful, the peacemakers, and the persecuted.

Oscar Romero, the Salvadoran priest who was assassinated in 1980 for his outspoken advocacy for the poor and his criticism of the brutal military regime in El Salvador, said this of the Beatitudes: “Even when they call us mad, when they call us subversives and communists and all the epithets they put on us, we know we only preach the subversive witness of the Beatitudes, which have turned everything upside down.”

Even Kurt Vonnegut, the self-described “Christ-loving atheist,” was “enchanted” by the Sermon on the Mount. “If Christ hadn’t delivered the Sermon on the Mount, with its message of mercy and pity, I wouldn’t want to be a human being,” he said in a 1999 commencement address at Agnes Scott College. “I would just as soon be a rattlesnake.”

In his 2005 book, A Man Without a Country, Vonnegut wrote:

For some reason, the most vocal Christians among us never mention the Beatitudes (Matthew 5). But, often with tears in their eyes, they demand that the Ten Commandments be posted in public buildings. And of course, that’s Moses, not Jesus. I haven’t heard one of them demand that the Sermon on the Mount, the Beatitudes, be posted anywhere.

If Steve Jobs had a created a campaign for the Beatitudes, I imagine it would feature images of people like Romero, Dorothy Day, Martin Luther King, Jr. Mother Teresa, and other heroes of the faith who were “crazy” enough to follow hard after Jesus. I don’t know, maybe it should even include Kurt Vonnegut, who, even though he could never fully accept Jesus’s divinity, still let Jesus change his heart in ways that challenge me as a Christian.

I think of this as the “Live Different” campaign.

The image below has my preferred formatting. Below that you’ll find the plain text version. 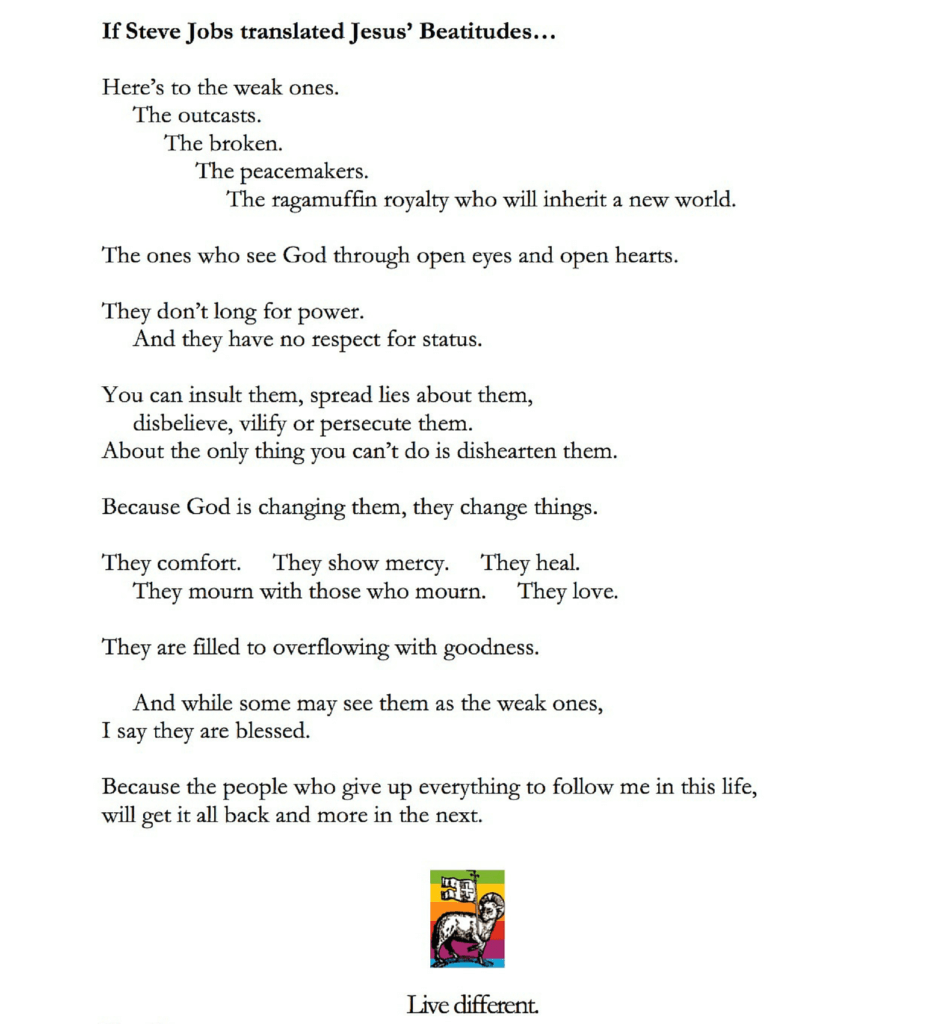 If Steve Jobs Translated the Beatitudes

Here’s to the weak ones.
The outcasts.
The broken.
The peacemakers.
The ragamuffin royalty who will inherit a new world.

The ones who see God through open eyes and open hearts.

They don’t long for power.
And they have no respect for status.

You can insult them, spread lies about them,
disbelieve, vilify or persecute them.
About the only thing you can’t do is dishearten them.

Because God is changing them, they change things.

They comfort. They show mercy. They heal.
They mourn with those who mourn. They love.

They are filled to overflowing with goodness.

And while some may see them as the weak ones,
I say they are blessed.

Because the people who give up everything to follow me in this life,
will get it all back and more in the next.

Go Deeper: I’d love to connect and hear about the work you’re doing in your own neighborhood. You can find me on Facebook and on Twitter. If you enjoyed this article, please subscribe to the Slow Church blog. As a way of saying thank you, you’ll also get a free copy of the ebook, Growing Deeper in Our Church Communities.

John Pattison writes and speaks frequently on topics related to the church, the neighborhood, and the creative life. He is the coauthor of Slow Church (2014) and Besides the Bible (2010) and the founder of The Resourceful Community blog. His articles, essays, and reviews have appeared in Books & Culture, Relevant, Sojourners, and The Englewood Review of Books, among many other publications. John previously served as Managing Editor of CONSPIRE Magazine and Deputy Editor of the Burnside Writers Collective. He lives with his family in Oregon's Willamette Valley.