When someone unfamiliar with Rich Mullins asks me where to start, I always tell them A Liturgy, a Legacy, and a Ragamuffin Band. The irony is, when that record released in 1993 during my freshman year of college, my roommates and I were a bit cold to it at first. We were connoisseurs of the rest of his catalog and had been covering his songs at youth events and in special music slots for a while, so it was with a lot of excitement that we tore off the cellophane and put the CD in the player. We liked it, but were a bit underwhelmed. But some of the best works of art play hard to get—sometimes you have to spend some time, give the songs space, live some life with them at your side, before they open themselves up to you. So it was with the Ragamuffin album. Now I put it up there with Paul Simon’s Graceland, Counting Crows’s August and Everything After, and Marc Cohn’s first record as one of the finest albums ever made.

It was the last album that Reed Arvin produced for Rich, and feels like the culmination of everything they were working towards for all those years. Those lush strings, Chris McHugh’s massive drums, Rich’s dulcimers (lap and hammered), Jimmy Abegg’s tasteful electric guitars, Reed’s piano playing, Billy Crockett’s ridiculously pretty acoustic guitars, were the perfect undergirding for Rich’s raspy voice and those gorgeous, epic lyrics. Almost 25 years later, I still marvel at their power.

Last year my friend Scott Mulvahill put on a tribute show for Paul Simon’s Graceland, and it was one of my favorite nights of music ever. No exaggeration. A bunch of stellar musicians who loved Graceland learned every note, every background vocal, every word, and invited their friends to celebrate it with them. We weren’t there to celebrate Simon so much as this thing, this work of art, that he helped to put into the world. In a town where everybody’s trying to get noticed, there was something magical about the fact that everybody on the stage was there to draw attention something else.

That was the night I had the idea for this show. That’s why we’re going to try to replicate the album note-for-note. Because the Ragamuffin album isn’t just about Rich. It was his songs, yes, but it’s also about Reed Arvin’s production, about Jimmy, Chris, Rick, Billy, Matt, Danny, and the other musicians and vocalists and engineers who came together in community and happened to make something that’s as powerful now as it was twenty-four years ago. Most of all, though, we hope the gift the Lord gave to Rich will spill out into the audience, and that all of our attention will be drawn past the beam of light that was that record and to the source of the light, whose name is Jesus.

I think that’s what Rich would want.

The first half of the concert will be much like the Behold the Lamb shows. We’ll have some special guests play their favorite Rich songs, tell some stories, have some fun. Then after the intermission we’ll play through A Liturgy, a Legacy, and a Ragamuffin Band. One more fun fact: the first time I ever saw Rich live, it was at the Ryman, with Carolyn Arends and Ashley Cleveland on the tour for this album. This is me geeking out. I can hardly wait.

Tickets are on sale now. 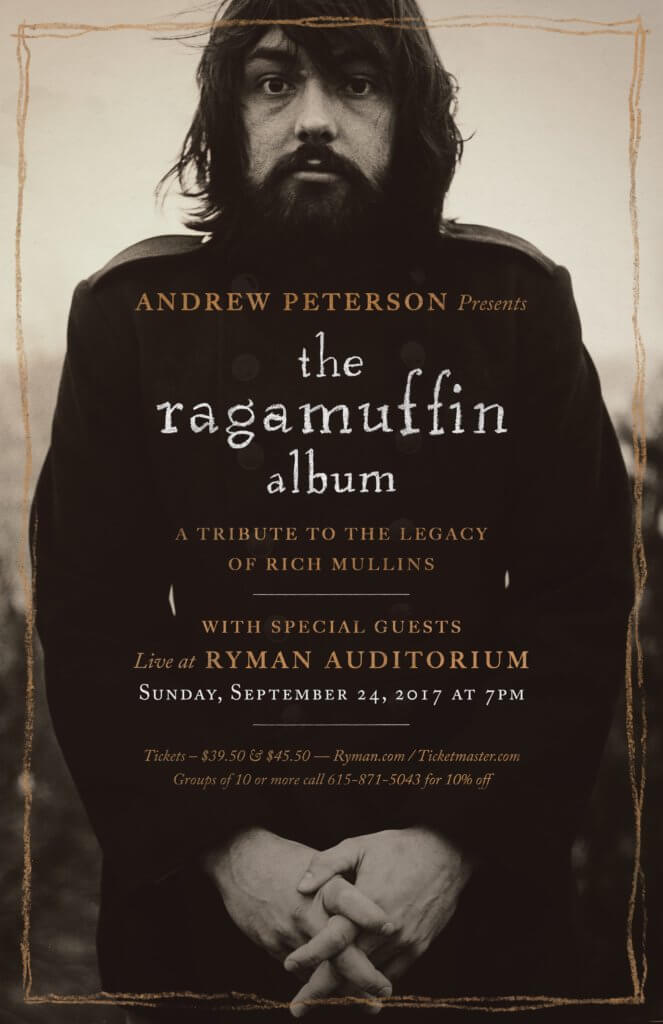