New Single: “Violet” by The Orchardist

It may come as a surprise to you, but our new song, “Violet,” (available here) is about a mermaid–or, rather, the existential grappling of a mermaid. Perhaps it isn’t at all surprising that a folk band composed of millennials born and bred during Disney’s golden age would write a song about a mermaid’s inner world, but I feel I should offer an explanation nonetheless.

After surviving my sophomore year of college, I bequeathed an intensive summer reading syllabus to my friend, Drew, whose writing you’ve probably seen here at The Rabbit Room (if not, definitely check it out because he’s very good at words). Drew’s assignments for me doled out more nonfiction than I’ve ever ingested within a two-and-a-half-month period, and my curriculum for him exclusively covered fiction, most of which was about death, a minor detail that escaped me at the time (still sorry about that, Drew). Among the pieces I instructed him to read was Hans Christian Andersen’s The Little Mermaid.

Hailing it as superior to the Disney film and an exquisitely written fairytale, I was admittedly a little miffed when Drew informed me that the protagonist, a teenage mermaid without a name, was melodramatic. I had hoped he might be touched by her sensitivity and insightfulness, but it was her wistful sighing and her longing for everything she couldn’t have that he noticed. Consequently, he wrote “Violet” and captured the plight of the emotionally-driven dreamer, whose world is sweetest when it’s sad, whose gifts will never be as precious as their losses. Any dissatisfaction I felt at Drew’s initial response to The Little Mermaid dissolved when I heard “Violet,” because I realized he glimpsed in Andersen’s story a manifestation of fallen humanness that I had never considered before. 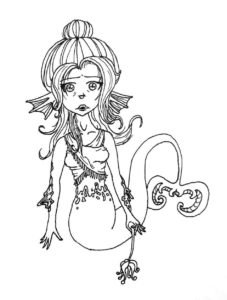 The character Violet cannot grasp gratitude or peace because she finds more gratification in despair than she does in hope. She fails to see that happiness and joy are by no means the same, and happiness has never satisfied her so sadness looks to be the better option. Desire is more delightful to her than receiving because receiving comes with growth and responsibility, while desire uninformed by wisdom necessitates no change. I suspect this tension between comfortable, familiar emptiness versus motivation to reach possible fullness characterizes what most human beings experience day to day. I further suspect this tension is felt more acutely when “fullness” directly implies the completed redemptive work of God.

Violet is so dependent on the safety of unfulfilled hope that she wouldn’t know what to do with a dream come true. It would make her world too big, her adventures too real, her choices more meaningful. She would rather remain short-sighted in her lamenting, because redefining her definitions of joy would require her to grow in ways rewarding albeit none too pleasant. This is exactly the sort of self-indulgent, fearful complacency that keeps us from immersing ourselves in the promises of God and living accordingly, and I say this as someone who has spent ample time being stubbornly sad and decidedly hopeless, so please receive it as a caution rather than an accusation. When we are presented with hope worth believing in, we have to live and act and speak like we aren’t just sad, just aching.

That’s not to say all our dreams will come true if we just hope they will and smile a little bit more. Embracing suffering plays an undeniable role in living any life at all, Christian or otherwise. But welcoming pain to the point of forgetting its function in a reality demarcated by Christ’s resurrection is a dangerous and slippery slope. “Violet” is a tongue-in-cheek warning against this, as well as an encouragement to all sadness-savoring, lamenting dreamers who have not yet discovered the richness of giving their dreams and themselves room to grow.

The character you encounter in “Violet” may not be an exact interpretation of Andersen’s mermaid, but it is a keen portrait of people. I invite you to give it a listen and a laugh, if the humor tickles you like it does me. I also highly recommend Andersen’s original story, which–on its own and without any additional ranting from me–says plenty about hope and love and suffering, if that sort of thing strikes your fancy.