You know we love our books at The Rabbit Room, so here’s a little help finding your next favorite. Welcome to Rabbit Reads, a new weekly series where we offer a recommendation from our overflowing shelves and open the floor for discussion. Anything can show up here: old and new, novels and memoirs, comics and kid lit. We just promise it’s something worth your time. Let’s get started with a book that’s been on our radar for months… 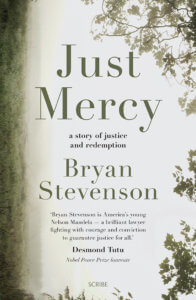 Why We Love It: “Ms. Parks leaned back, smiling. ‘Ooooh, honey, all that’s going to make you tired, tired, tired.’ … Then Ms. Carr leaned forward and put her finger in my face and talked to me just like my grandmother used to talk to me. She said, ‘That’s why you’ve got to be brave, brave, brave.’”

I don’t know how to begin talking about Just Mercy. Sometimes I could barely make it through a chapter because I needed to stop and let anger and grief do its work. Sometimes, I flew through the pages, spurred on by glimpses of hope. Bryan Stevenson’s dedication to living out justice and mercy through his vocation is inspiring, and his memoir gives us a front row seat to corruption and healing, fear and hope.

Stevenson, a Harvard Law School graduate and founder of Equal Justice Initiative, has dedicated his life to advocating for the forgotten in American prisons. He’s argued multiple cases before the Supreme Court, defended the wrongfully convicted, and spent over 30 years challenging racial and economic inequities in the U.S. justice system. But the beating heart of the story is one of his early clients, Walter McMillan, an African-American man wrongfully convicted of a young, white girl’s murder in Monroeville, AL. (The irony that this takes place in Harper Lee’s hometown is not ignored.)

Stevenson retraces Walter’s story in riveting, readable prose — the bizarre circumstances that led him to death row, the evidence for his innocence, and the six year journey to his exoneration. The story feels too crazy to be true, but it is, and interspersed throughout are stories of other clients — mentally disabled adults, poverty stricken families, and neglected and abused children serving time in horrible, adult prison conditions. Statistics and evidence abound (it is a lawyer’s story, after all), but the particular people, their names and stories, compel us to see the humanity we share.

It hurts to read a story like this. Behind the author’s compassion for broken people, a rage burns against a broken system. Instead of murderers and thieves, he presents humans with resilience, concerns, families, a sense of humor. And though fear and prejudice is on full display, he shows us beautiful moments of healing— a racist prison guard broken by empathy, a couple who chooses to love a child convict.

And there is the beauty, a hint of light through the iron bars.

Go Deeper: Since its 2014 release, so much conversation has surrounded this book. Here’s the author’s popular TED Talk “We Need to Talk about an Injustice.” It gives a good 22 minute backstory to issues discussed more deeply in the book.

Have you read Just Mercy? Feel free to discuss your thoughts in the comments.

[Just Mercy is available here in the Rabbit Room Store.]