There are some stories we find when we’re kids that follow us well into adulthood. They’re comforting and familiar, but slowly reveal new beauties every time we encounter them. In this week’s edition of Rabbit Reads, I’d like to introduce you to one of mine: a 60s fantasy novel turned 80s cartoon turned one of my favorite books. 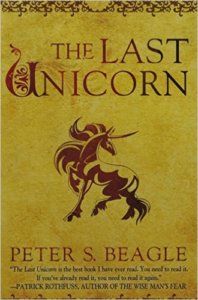 Why We Love It: “The unicorn lived in a lilac wood, and she lived all alone.”

It might be one of my favorite opening lines in fantasy writing. It’s wistful and lovely and sets the tone for a book I return to when I need a cozy, familiar tale. I first discovered The Last Unicorn in animated form when I was a little girl, but I didn’t know about sehnsucht then, that longing for another world. But the first time I read the original novel as a young adult, the story took on a whole new meaning.

It begins in an eternal spring wood where a unicorn wonders, “Could I really be the last?” and leaves home to find others like her. She’s alone in the world and caught off guard — even offended — by the humans who look right through her majesty and only see an old mare. The immortal unicorn finds herself in a new age, where creatures like her have faded into legend, forgotten in the noise of everyday life.

But not everyone is blind to the wonder. Along the way, she meets a bumbling magician, a peasant woman, and a lazy prince. She walks through the world as an eternal, ethereal presence, and nobody who encounters her leaves unchanged. Even the proud unicorn, still immortally herself, is altered by the kindness of her human companions in an ending that grows more bittersweet every time I read it.

I love Beagle’s writing. It feels like old-fashioned high fantasy, but can turn contemporary and anachronistic at the turn of a page, giving the fantasy footing in our own world. And in this place where magic is nearly forgotten, she is the rare, real, and true thing. It’s the unicorn’s story, but I’m more drawn to the human characters who ruminate, fight, love, and grow, swept up in her fairy tale and becoming braver and stronger in her presence.

So back to sehnsucht. Before I had a name for it, I felt it when Molly met the unicorn for the first time, greeting her with anger — “It would be the last unicorn in the world that came to Molly Grue!” After her outburst, the forgotten woman weeps, because in that moment, touching the unicorn’s mane, her little girl hopes become real and alive.

In that moment, she’s reminded there’s still a little magic in this old world yet. And so am I.