The Half-Life of Holiness, Part 1

I recently had the privilege of editing a manuscript for my friend, the artist and writer Kari Gale. Kari writes a lot about pilgrimage and her forthcoming book describes the ten weeks she spent on Iona, a small island off the western coast of Scotland that has become nearly synonymous with Celtic Christianity.

Though the island measures only one by three miles—an area smaller than my town of Silverton, Oregon (pop. 10,000)—Iona was the heartbeat of monastic life in Scotland and northeastern England for hundreds of years. It was the adopted home of Saint Columba, who arrived from Ireland in A.D. 563, perhaps as penance for taking up arms as a monk. Over the next three decades, Columba oversaw the foundation of some sixty monasteries in Scotland.

The Book of Kells, the famous illuminated gospels dating from around 800, was probably begun on Iona. Also familiar are the high stone crosses, which some scholars believe first came into popular use there.

In one passage in her manuscript, Kari recalls sitting on the rock ruins of a medieval nunnery and feeling welcomed into the ongoing spiritual life of a community that hasn’t been officially active for hundreds of years. I could easily imagine the women who for generations had quietly gone about their lives of daily prayer, work, and worship in that place. The spirit of those nuns—as well as the monks and laypeople of ancient Iona—seems to have permeated the island’s very soil and stones.

What animates the whole project is a hunch that we still live in a God-saturated world.

Which got me thinking: What is the half-life of holiness? Does holiness accumulate in a place over time, and can it be felt by the people who live or visit there, even many years later? And is this part of what Celtic Christians meant by “thin places”—those sites where the membrane between earth and heaven, the visible world and the invisible, seems especially porous? 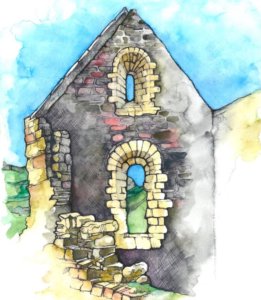 As I mentioned in a recent blog post, I am working on a book project about the re-enchanting of ordinary life. Prior to finding clarity on the project, there were weeks when I sensed I was writing “around” a central theme—in blog posts, in my journal, or on whatever scrap of paper was close at hand—but I couldn’t articulate what that theme was. Reading the above passage in Kari’s manuscript flipped a switch for me. I wrote down a string of questions I wanted to explore further. Those became the book’s superstructure and, eventually, a chapter-by-chapter synopsis.

What animates the whole project is a hunch that we still live in a God-saturated world. Celtic Christians believed that even the most common tasks (washing dishes, milking the cow, baking bread, etc.) were performed with the help of the Trinity and in the company of angels. A walk to and from the fields was an opportunity to talk to God with the intimacy of Adam and Eve in the Garden.

We too can meet God in the “thin places” of our everyday lives. This is the spirituality that animates Slow Church within the day-to-day stuff of life. My book may start in Ireland and Scotland but it moves progressively closer to home. The wilderness, the neighborhood, the Church, our families, our bodies, the borderlands of our own souls: if we are attentive, these are seams through which we glimpse firsthand the presence of the God who still pervades and sustains all things.

The Half-Life of Holiness

My new book isn’t about Celtic spirituality, though it is profoundly informed and inspired by it. Learning about my spiritual ancestors—not to mention my actual ancestors (the name “Pattison” can be traced back to a Gaelic kingdom that included Iona)—has given my project clarity and momentum and enthusiasm.

For example, Kari’s simple, quiet, lovely recollection of the nunnery spurred weeks of my own writing. My initial question, “What is the half-life of holiness?” was stuck in my head for weeks. Contemplating it invigorated my thinking about place, time, impact, and the Church…so much so that I had created separate pages in my pocket notebook to capture the stream of questions, quotes, and thoughts on those subjects.

To give you a sense of where the book is going—and to reveal a little about my own process—here are some of those notes I made in my pocket notebook. (Pretend they are handwritten.) Each represented a trail to be explored in more detail later:

Suppose we did our work
like the snow, quietly, quietly,
leaving nothing out.

I also wrote down “The Columba Option,” though I doubt it will get as much traction as the original.

Thankfully, we don’t always have to wait hundreds of years to experience the impact of someone’s quiet faithful presence. In Part 2 of this piece, I’ll introduce you to my friend James Helms, whose family has been working with neighbors to weave a fabric of care in northeast Portland. But, as we will see—and as James would be the first to tell you—he and his family are part a continuum of faithfulness that began long before they moved into the neighborhood.

Image Credit: A painting of the Iona nunnery, by Kari Gale. From her forthcoming book and used with permission.

Go Deeper: I’d love to connect and hear about the work you’re doing in your own neighborhood. You can find me on Facebook and on Twitter. If you enjoyed this article, please consider subscribing to the Slow Church blog. As a way of saying thank you, you’ll also get a free copy of the ebook, Growing Deeper in Our Church Communities.

John Pattison writes and speaks frequently on topics related to the church, the neighborhood, and the creative life. He is the coauthor of Slow Church (2014) and Besides the Bible (2010) and the founder of The Resourceful Community blog. His articles, essays, and reviews have appeared in Books & Culture, Relevant, Sojourners, and The Englewood Review of Books, among many other publications. John previously served as Managing Editor of CONSPIRE Magazine and Deputy Editor of the Burnside Writers Collective. He lives with his family in Oregon's Willamette Valley.