I’m six years old and I’m walking into a theater. The cavernous space is so crowded that nearly every seat is taken and we have to sit right in the front row. There are people on the floor in front of us and in the aisles around us as if they are congregated for a tent revival. The buttery smell of popcorn clouds the air and I’m anxious, aware of my own smallness.

I’ve heard of the movies, I’ve seen them on TV, but this is new, this vast open space, the crowds of people, the clamor of excitement, the barely restrained hush of expectation. I’m right up at the edge of the towering screen and nervous, wondering what’s about to happen. What have all these people come to see? This is important. This means something.

The lights darken, the speakers hiss background static into the air around us. And then, without warning, the screen flashes bright blinding white as a cacophony of noise fills the theater. I’m both terrified and transfixed—

—and that’s where the memory ends.

In the four decades since that flash of light transfixed me, I’ve often wondered if the memory was real. I couldn’t even remember for sure which movie it was. Was it Star Wars? The Black Hole? Against a Crooked Sky? Maybe it was just a projector malfunction or a Coke commercial. Did it matter? I’ve been in love with the cinema ever since.

I tried (and mostly failed) to make my own movies as a kid, and for years I dreamed of film school and a career in movies. But few others seemed to feel as strongly about stories and movies as I did. Kids in school mocked me for all the time I spent reading. And I felt increasingly compelled to write stories of my own to try to articulate something I felt but couldn’t explain.

Had I really seen something extraordinary in that flash of light? Or was I just crazy? Either way, I’ve never fallen out of love with the movies, and in lieu of being able to make my own I’ve embraced storytelling through my writing. I’m happy with that (though if I’m honest I’d still jump at the chance to make a movie if the right project came around).

A couple of weeks ago I learned that Steven Spielberg’s Close Encounters of the Third Kind was returning to theaters for its 40th anniversary. I also discovered that my wife had never seen it. If ever there was a date night divinely appointed, this was it. “I can’t miss this,” I told her.

We entered the darkened theater and took our seats beneath the towering silver canvas. The lights went out. The screen flashed white. And like critic Anton Ego experiencing his revelatory taste of ratatouille, I was instantly snapped back through space and time into childhood. Noise shattered the darkness. And a latent memory erupted into the present. I was six years old again. Small again. Wonder had awakened before me, around me—within me. This means something. This is important.

Close Encounters is a peculiar story of a man set in motion by an encounter with something he can’t explain. It’s full of confusion and arguing and deafening noise. It’s a cacophony of human voices and mechanical clatter that resolves into an epiphany of breathless awe, thunderous music, and light. There may be no other piece of cinema that loses so much in translation to a television screen. The whole point of the film hangs on the experience of being enveloped by its final symphony of sound, color, and wonder.

When I walked out of the theater with Jennifer, I realized that in a strange way, the journey of Richard Dreyfuss’s character, Roy, parallels my own. Apart from that opening flash of noise and light, I have no memory of seeing the film as a child, but like Roy, I’ve been haunted by an encounter that I can’t possibly have understood.

There’s a moment in the film when the two main characters, Roy and Jillian, are watching events unfold while hidden in the rocks. She’s scared and apologizes because she’s too overwhelmed to go any closer. But Roy can’t withhold himself from the coming apocalypse. “I have to go,” he says apologetically. “I can’t miss this.”

I think my wife would be the first to confess that this moment illustrates a facet of my own personality. If we’re out hiking, we’ll often find ourselves having that same conversation as I step away from her to peer over the edge of a cliff or climb a mountainside along the road. I can’t resist the call. I have to see what’s out there.

A few years ago NASA announced that anyone who wanted to go to Mars could sign up on their website to be considered for the mission. Even at 40 years old, I had no hesitation. There was no question about whether I was going to sign my name to that list. Jennifer forbade me (as if I’d actually be picked) and a half-joking, half-serious argument ensued. I won’t say whether or not I later signed up without telling her, but I’ll bet you Roy knows what I did.

If I look back at my life, I see that way of thinking has informed more than merely my recreation. I joined the military during the Gulf War because I didn’t want to miss the chance to participate in something rare, something bigger than myself (foolish as that might have been). And when Roy accepts the ultimate invitation at the end of Encounters, I find myself wanting to duck my head to follow him up the ramp, to see what he sees. I’d go with him if I could. Right now.

When I examine the stories I write, I see they are marked by a series of characters who find resolution when they encounter an inscrutable mystery that invites them into a reality bigger than the one they’ve known. Whether it’s Fin Button wrestling a song with her fiddle, Barnabas Bead following a star, John Thurston staring into the magnanimous eye of a whale, Podo Helmer coming face to face with a sea dragon, or Mint Julep’s whorl of apocalyptic vision, they are all in some measure the children of close encounters (and Close Encounters). They are all marked by moments of otherworldly revelation and awe.

This means something. This is important.

When I was ten years old, on the last night of church camp, we sat in the orange light of the bonfire and sang until we’d exhausted our kumbayas. An invitation hymn rose up and one by one kids went forward to commit their lives to greatest mystery of all, and I was one of them. I have to go. I can’t miss this.

In the final act of the story, we all shall enter the darkened room and wait with anticipation to be bathed in the presence of an uncreated light. We shall rise to stand amid the symphonic music of the spheres and know that something beyond our comprehension has been calling to us across eternity. We shall lose ourselves in awe as we are welcomed into wonder that surpasses all understanding.

Forty years ago, Steven Spielberg followed a mystery and created a cinematic vision of light and sound and gave it to my young mind. Is it possible that through such an experience the Maker of Time and Space might have instilled in me a longing not only for that same vision but for the source of it? I think so. I hope so. Isn’t that what art is for? To wake us up and give us words and sounds and images with which we might reach out and brush up against the unknowable?

I’ve been all my life on the heels of an encounter scarcely remembered. I intend to follow it into the light. With Roy’s beatific look of childlike awe, I intend one day to leave everything behind and step into the revelation that awaits me.

This is important. I can’t miss this. This means everything. 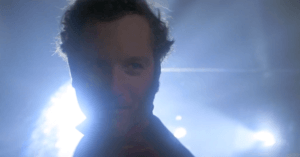