In Defense of Self-Loathing (Not Mine)

Probably, it would be helpful if I explained here and now that I’m writing about a fictional character invented by Charles Dickens, and not about the self-esteem sufferings of an actual person.

Let me begin by welcoming all classic literature tasters, whether you’re a Dickens enthusiast or one of those who think he’s too self-indulgent to tend his talent well. Admittedly, I don’t play well with readers in the latter category, but I’m sure we can all set aside our differences for the time being. I will also offer a disclaimer warding away anyone who has not actually read or completed A Tale of Two Cities, since I intend to discuss the ending in detail and I couldn’t possibly ruin the conclusion of such an extensively well-crafted drama for any first-timers out there. (Disclaimers and peace-making done, I commence with what used to be a borderline-stream-of-consciousness melee and, for your sake and mine, has recently been whittled down.)

When I arrived at college, I quickly discovered one of the quickest ways to make or break friendships was owning A Tale of Two Cities as my favorite book. During my sophomore year I reread the novel, and a classmate announced (with a touch of purposeful insolence just to annoy me) that he especially did not appreciate Sydney Carton. He then added insult to injury by describing Carton as a fussy, pathetic “wimp” willingly opting for hedonistic despair revolting to a modern reader’s eye.

Actually, all he really said was that Carton is a wimp. But obviously everything else was implicit.

What keeps me coming back to Sydney Carton’s corner is his inexplicable, trademark self-loathing.

I have a persistent tendency to defend Sydney Carton should the occasion arise, which is both useless for me and obnoxious to other people. It wasn’t until a recent reread that I unearthed the source of my affinity for him, and it is the very thing inspiring other readers to criticize and even denounce Sydney Carton as a poor excuse for a man, much less an antihero-turned-romantic-hero. What keeps me coming back to Sydney Carton’s corner is his inexplicable, trademark self-loathing.

After Dickens’ decadent style as an author and Lucie Manette’s unrealistic level of perfection, the chief complaint I hear regarding A Tale of Two Cities is Carton’s wildly out of control self-condemnation. Despite his frequently articulated and enduring certainty that his life is a hopeless waste, we don’t actually know why he hates himself so much. Any reader trying to uncover the concrete reason will only be driven to the brink of diagnosable insanity. The question is never answered, not by Dickens, not explicitly.

Equally insufferable to many is Carton’s stubborn resignation to his poisonous state of mind. He evades and paradoxically deepens his self-hate by drinking himself into oblivion when he can (which is most of the time), insisting that his life will never amount to any good and that all his potential has dissolved. Throughout the book we learn a little at a time that part of his problem is his way of putting other people before himself in most circumstances, which hollows out his sense of self even more.

A reader insensitive to his plight or perhaps just fed up with his so-called whining would respond with impatience and argue that all he has to do to turn his life around is try. They may suggest that if he could simply adjust his self-image it would naturally improve—mind over matter, positive thinking. For us (assuming you, dear reader, inhabit the same country I do), individualist Americans who believe in pulling ourselves up by our bootstraps, someone with great talent and a wickedly sharp mind who insists that he’ll never amount to anything (and therefore doesn’t) is deplorable. Every time he calls himself “a drudge” current readers are prepared to throw the book across the room in response to his melodrama.

But Sydney Carton’s ever depleted self-esteem is less dramatic than we may first accuse it to be. Nowadays when folks go on and on about how much they hate themselves, it’s often assumed to be a tactic for drawing consolation or praise, theatrics begging a stroke for the ego. But Carton says he is a lost cause because he actually believes it. He says he is a lost cause because his world is run by dishonesty, and he’s tired of people who lie to themselves about their goodness by insisting their actions are righteous when in reality they’re wrought with self-importance (i.e. Stryver, England’s authorities and judges, Barsad).

Carton has given up interest in playing a game of weighing his good against his depravity, because he’s also given up interest in watching everyone else do the same thing only to be blind to their darkness. He sees how twisted good intentions become harmful to others in action, and his sensitivity to this—that is, the imbalanced morality particularly demonstrated by colleagues and English authorities—makes him deeply self-aware but consequently weak against his own self-scrutiny. Therefore Carton, whose grasp of the world’s brokenness leaves him guarded against hope for goodness or healing in any form, openly confesses the grime in his heart instead of clinging to the sightless, selfish idea that he’s above reproach, but he takes this perceptiveness too far in the direction of self-disgust.

Dickens tells us precious little of Carton’s history in comparison with just about every other protagonist he writes in his novels, hence every reader’s utter confusion over why Sydney makes himself suffer unceasingly. What’s more bewildering, any flashbacks Sydney experiences convey only the misfortunes and sadness he’s seen during his younger years. No scandals, no blots, no misdemeanors. Nothing worth feeling guilt over.

So what has Sydney Carton done? What’s the big secret, the unnamed transgression?

Given the evidence Dickens supplies, there may be none at all. And that, I would argue, is exactly the point.

Perhaps Sydney’s only real sin is his parasitic shame, a byproduct of infected pride and twisted, swollen self-image. It may sound like an oversimplification, but Dickens doesn’t seem to think any juicy details are necessary in the antihero’s arc, so we’re left believing there is calculated reason for what he does divulge. After all, if Dickens doesn’t require any further details you know something significant is going on.

Carton not only mimics the figure of Jesus---dying upon a gruesome torture device, literally taking the place of a condemned prisoner so that his dearest loved ones can live freely ... ---he further exemplifies the redemptive work of God, sometimes murmuring, sometimes thundering its way through our lives according to His good judgment.

What he does think necessary are numerous hints branding Sydney Carton a Christ figure, and one of the most legendary literary Christ figures at that. But our favorite loquacious author does something more as he leads Sydney to a grisly scaffold, something worshipful even. Carton not only mimics the figure of Jesus—dying upon a gruesome torture device, literally taking the place of a condemned prisoner so that his dearest loved ones can live freely, liberated from the histories that have haunted their steps—he further exemplifies the redemptive work of God, sometimes murmuring, sometimes thundering its way through our lives according to His good judgment.

Sydney Carton’s shame and guilt lead to no visible repentance or gospel-humility (a term C.S. Lewis and Tim Keller, among others, have discussed and popularized at length, if you’d like some fun, light reading this week). Unruly and unhealthy, they contort him into a man diseased with habitual sin—the sin of turning from God’s just mercy in favor of one’s own laws and standards, of deciding one’s worth for oneself, the devastating sin of pride. 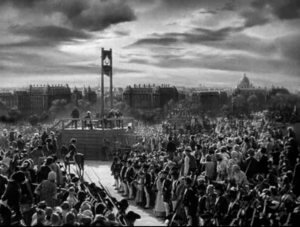 And yet, the gratuitous, self-directed disdain spawned from this inverted pride is the very thing that ultimately levels Carton to a posture from which his selfless, life-giving sacrifice is possible. Believing his life forfeit when weighed against those of “better” men and women—men and women he loves deeply, more than he loves himself—Carton’s skewed perspective abruptly evolves into a strength. As we watch him secure an escape for the Manette family by diving into the underworld of French and English politics, Sydney Carton’s willingness to throw his life away pivots from a groan-inducing annoyance to an unstoppable weapon, the most powerful one at his disposal against the destruction closing in on his friends.

His shame and self-loathing, his sickest and most broken place, withheld for whatever reason from God’s healing until the final chapters of his story, are not cured but redeemed at The Guillotine. Sydney Carton’s seemingly purposeless, biting self-deprecation lays him so low as to step into death, saving all other protagonists and searing a depiction of quiet but victorious righteousness in the minds of any savvy onlookers. He performs a wordless act of justice and an irreversible act of mercy, as Christ did for us upon a cruel, now gorgeous platform. But Sydney Carton also demonstrates the process of redemption, a personified picture of how our Creator and Father grips the deepest darknesses of His beloved, crafting those same darknesses into catalysts for unthinkable renewal.

From the moment we meet him in the third chapter of the second book, Sydney Carton’s course has been set. His subjectively irritating self-hatred only paves the way, however tumultuous and tragic a way it may be. It leads him from hopelessness in himself to hope for a fuller restoration than he could ever find in his own attempts at goodness, or society’s definitions of success, or marriage to a loving woman. His wandering lands him at the feet of the Lord, his shame and pride turned inside out, his wounds morphed into saving grace. His friends are saved from wrongful murder. He is saved from perpetual entrapment of his own making.

It gives me no small amount of peace when I realize the story Dickens wrote for Sydney Carton is our story. Reread the novel and I guarantee, unless you’re one of those people who can’t help detesting Charles Dickens, it will make you believe redemption and justice and mercy are happening for us all the time, all at once. And if you didn’t heed my warning and you haven’t read A Tale of Two Cities, but you went ahead and read this anyway, now you really have to read the book. Because Dickens tells the story so much better than I do.