Sometimes God likes to use seemingly dumb ideas to give him glory, ideas which can take our lives in unexpected directions. For me, it was writing about Christian beards.

One morning in the summer of 2010, I looked in the mirror and thought, “Meh. Maybe I’ll shave tomorrow.” Several tomorrows passed, with no razor touching my skin, and suddenly there it was: a nice, big beard. It wasn’t long before I started getting a lot of “Duck Dynasty” comments and having to tell people, “Excuse me. My eyes are up here.”

The beard covers a multitude of chins!

A friend introduced me to a website and Facebook page called Bearded Gospel Men, which consisted almost entirely of funny/churchy/beardy memes.

“To shave is human, to beard is divine,” read one.

“The beard covers a multitude of chins!” proclaimed another.

What can I say, they made me LOL and I enjoyed following the page. 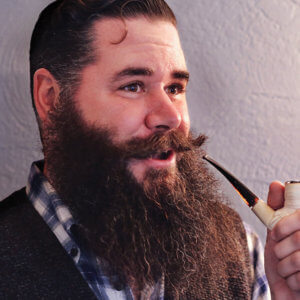 When the proprietor retired from running it, I volunteered to take over. After all, I’m a funny guy, I’m a churchy guy, and I’m a beardy guy. It seemed like a perfect fit. So I started making beard memes in my spare time (think about that phrase for a minute), and lo and behold, this little website and Facebook page started gaining momentum.

Thanks to Chuck Norris, hipsters, and the aforementioned Duck Dynasty clan, pop culture was reaching Maximum Beard. A lot of people seemed to be enjoying the beard-centric humour of Bearded Gospel Men, and they were sharing my jokes all over the interwebs. I began to offer content beyond memes, and featured lighthearted biographies of great “Bearded Gospel Men” of history. I also began posting articles that were devotional in nature, articles about what the “Gospel” part of “Bearded Gospel Men” really meant.

To my surprise, people began to respond positively to these features, and I started getting messages and emails letting me know that something I’d written had touched someone in a positive way. From time to time, however, I would begin to experience BHF: Beard Humor Fatigue. How many beard jokes can one guy write? So I’d let the site rest for a while, sometimes for months. Besides, I had loftier things to focus on. And wasn’t it silly to think a page about beards was worth all that much to the Kingdom?

But I kept coming back to it. The world’s most ridiculous premise for a blog just wouldn’t let me go, and I even began to make real life, flesh-and-beard friends. Bearded Gospel Men was literally changing my life.

Through a connection with the site, I was introduced to an author named Jared Brock, who approached me with the idea of turning the blog into a book. I loved the idea. The book would contain 31 biographies of great Bearded Gospel Men of history, from Saint Augustine and Saint Ignatius, to D. L. Moody and Keith Green. Just like the website and Facebook page, it would also feature devotional articles (“Confess Yourself Before You Wreck Yourself”), and of course, plenty of humor (“Beardly’s Beardlieve It Or Not!”). 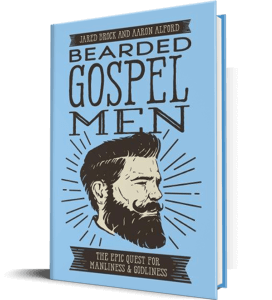 A little over a year later, Bearded Gospel Men: The Book is a reality, and will be released through HarperCollins on November 7. It’s not lost on me that, essentially, my beard landed me a book deal. Go figure. Along with articles by Jared and myself, Bearded Gospel Men also features several guest writers who were kind enough to lend their talents to this strange little book.

The Rabbit Room’s own (sometimes bearded) Jonathan Rogers tells a story about the very bearded Saint Patrick. My close friend and missionary brother Jimmy Sustar has an entry, as does singer/songwriter/Hagrid-lookalike Bradford Loomis. And the Bearded Gospel Hobbit himself, Malcolm Guite, contributes a poem of epic beardliness.

My hope is that through this book someone may discover their new favorite writer. “Say Bill, how is it that you decided to devote yourself to studying the life and writings of Southern raconteur Jonathan Rogers?”

“I bought a book about Christian beards.”

Does God have a sense of humor? Apparently. Does God have a beard? Considering the bodily resurrection of Jesus, it can be argued he does. (Unless Jesus shaved on Easter Sunday morning. But that seems unlikely.) Does God use seemingly dumb things to bring him glory? Ask Balaam’s seemingly dumb ass and he’ll tell you: Absolutely. And when he does use our silliest and/or dumbest ideas in unexpected ways, it’s usually to help us have a good laugh at his goodness, and to help us glory in godly humility.

Is a book about beards going to change the world? Probably not. But in the same way that I hope someone may find a new favorite writer, I hope they may also find their new favorite saint. Learning about a saint you’d never heard of before can be a lot like meeting a new best friend, and best friends change our lives. My prayer is that men (and perhaps the women reading over their shoulders) will be introduced to someone who may inspire them to live the Gospel more completely, more recklessly, than they have before.

“Say Jim, where did you first learn about Saint Luka of Crimea, the man who inspired you to sell all you have, go to medical school, become a surgeon to the poor and help topple a Communist regime?”

“I read a book about Christian beards.”

Bearded Gospel Men is now available at Amazon.com, and will be available in the Rabbit Room Store just as soon as the Canadians get their act together.