Melanie Penn hopes you trust her when she tells the story of her latest album. Specifically, she’s hoping not to come across as too “mystical” or “freaky,” but the reality is Immanuel, Penn’s first Christmas album, was birthed in a supernatural way.

Instead of spending last Christmas with her family like normal, she spent the holidays in seclusion in her New York apartment, crafting songs as they unexpectedly came to her, first-person narratives from characters in the Christmas story. One by one, she obeyed the creative impulses until the scope of the project came into view. Immanuel is the beautiful result.

Melanie recently sat down with us to detail the album’s origins and to share how friend and producer Ben Shive talked her into following through on the scariest part of it all.

RR: Immanuel is an interesting spin on a Christmas album in that it tells the story from various first-person perspectives. Where did the idea originate?

It’s hard to explain this, but I really felt the Lord was calling me to hunker down in New York to be alone, to be by myself. I had this odd sense that God wanted to give me something at the end of this hard year. And again, it all sounds very mystical, right? It’s just an impression that I had. So I didn’t go home for the holidays.

I usually spend Christmas in Virginia with my mom and dad, but instead I spent it in New York really alone. I randomly one day wrote a song from the perspective of one of the wise men in the Christmas story. The song was about following a star. The obvious narrative was that it was about one of the wise men, but the other part of it was about trusting that you’re on the right road. You’re not sure where the journey is going to culminate, but there’s something guiding you and you trust you’re heading in the right direction.

I wrote that song and it intrigued me that I’d done that. Then a couple weeks later, I had a Christmas show in New York. It’s an annual tradition and a lot of people come and I sang the song as one of a collection. It’s usually only covers, but people came up saying they loved the song. So that intrigued me, too.

Then a couple days later, still in this month of December when I was secluded in New York, I wrote a song from the perspective of one of the angels in the angel chorus. Again I have no explanation for any of this. I don’t know why I started writing these songs. Then I started reading Isaiah and the prophecies of Jesus being born and I wrote the song for Isaiah.

They came out easily in a way but there was also a lot of labor. I was immersed in these melodies and the lyrics of this very ancient story became everyday. I wanted to narrate them in a modern, everyday, simple way.

After the third song, I thought, “Okay, now I’m in this thing.” [Laughs] I continued to write the songs and once I got to the song about the shepherd, which came at the end in January, I realized I was into something that was engaging me totally.

I thought it was weird. I wondered, “Why am I writing all of these Christmas songs?”

I sent all of my voice memos to Ben Shive who’s a longtime collaborator of mine. We were talking about doing a different project, but I wanted to let him know what I was working on, and he said, “When are you coming to Nashville to make this Christmas album?” 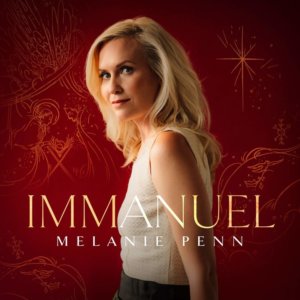 So the songs started coming to me as a gift, but there was no grand vision to make an album. My life didn’t get consumed by it until weeks into writing the songs. I didn’t expect it, but I think it turned out so well. For me the process has been so wonderful and special. I’ve had so much joy doing this and I hope that people get that out of it. I really want there to be a pure tenderness and joy in the album because that’s how I felt while making it.

RR: You said these songs presented themselves to you in a way. How different is that from the normal process of songwriting?

Melanie: I still consider myself a nascent songwriter, so I’m in no way an expert. I would say that the difference in these songs is that typically I’ve taken an experience I’ve had or something I think and I try to distill it into a song. Whether that’s trying to find a theme that exists in the world already and trying to write my own or having an experience and then trying to articulate it in a universal way, it’s all come down to me and things I’m going through. But these are all about other people. I’m trying to get into who they were and what they might have gone through. These songs are very biographical, which is totally different for me.

I have to believe the saints are in heaven. I believe they are eternal souls. I have to believe on some level that they’re watching over us. I would ask them from time to time, “What would you want me to say? I’d love to know your story.” That can be freakish to talk about channeling Mary and Joseph. No! I just mean that I have to believe on some level that we all exist together as the eternal church and I did inquire of them what they felt and what they might have thought. I just wanted to be true to who they were. So that was very different.

RR: You started with the wise men, Isaiah, the angel, etc. Is there a moment when it becomes more intentional, where you have seven songs and you need ten, so you pick a new perspective on purpose?

Melanie: It became fun because honestly there are so many people you could write about. There’s Simeon and Anna and all these other characters. Most of the characters gravitationally pulled me, so I knew there were songs there. I knew I wanted to write a song for the innkeeper and the star of Bethlehem. Those were organic and had gravity that I couldn’t explain. I just knew it had to be done.

I was going to leave Mary out of it totally because I was terrified to step into her story, so I thought I would leave her out. Ben was like, “That’s super cute if you think you’re going to write a Christmas album and that you won’t write one for Mary.” After our first week of pre-production, he sent me back to New York and said, “Why don’t you go write a song for Mary?” That was the hardest thing I’ve ever done. I had to pick a week in May, I think, and a friend lent me a house in the Hudson Valley. I went there specifically to write a song for Mary.

Even when I wrote it at that point, we recorded it and then in August I rewrote the chorus. It just wasn’t good enough and I knew it wasn’t. I wanted it to be worthy of her story and worthy of who she was and I don’t know if I accomplished that, but I now have peace about it enough to let it go.

RR: Was there ever consideration that you would leave it out since you said you weren’t quite sure about it even after you first recorded it? Or were you 100 percent committed to finding a way to make it work?

Melanie: 100 percent committed. It was never a question. I knew that Ben was right. I knew she had to be included, but I just wanted a way out of it. Once I faced the truth of that, I knew I couldn’t complete the album without her.

RR: That’s powerful what you just said, because you just admitted you had this single thing you wanted to avoid and yet it took community to push you to do the thing that you ultimately wound up so committed to.

Melanie: I love how you put that about community and it speaks to the creative relationship I have with Ben. It feels very meant to be. He speaks a lot of truth to me and I think I speak a lot of truth to him. When I think of what I’d want artistic collaboration to look like, it definitely looks like our working relationship.

RR: I love that the perspectives aren’t just those immediate figures we find in any nativity scene but you include Isaiah and this Old Testament lead-in. Was that purposeful to give it that breadth of scope?

Melanie: I don’t know if it was intentional. Isaiah’s song is long at six minutes, which to me is a little risky. But in a way, it felt like the thesis statement, not only for the album but the story itself. It’s also so relevant for today. Today more than ever, we need to hear there is a ruler coming who is going to reign in peace and speak peace. Isaiah’s words about Christ’s coming just felt so in the moment we are in and then also foretelling what actually happened. It felt like the natural launching point.

The album will be available tomorrow!