Rabbit Reads: The Boys in the Boat

The world is full of audiobook enthusiasts, but I admit I’ve never listened to a single one. (Blame a wandering attention span that likes to reread sentences I missed?) So I can’t speak from experience about the wonders of letting someone read you a story, but Carrie Givens can. As an ardent audiobook listener, she’s got a list of the next great things to read with your ears, and is sharing a sports history lesson in her first contribution to Rabbit Reads… 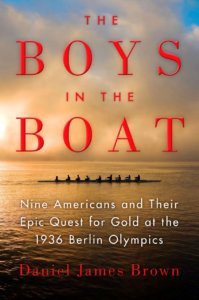 Why we love it: Narrative nonfiction is one of my favorite genres to listen to. When I do, I feel as though I’m taking part in the great oral tradition of storytelling that has been passed down through all the generations from before the time of the written word.

The Boys in the Boat is on the list every time I recommend a book, especially an audiobook. Edward Herrmann’s reading of Brown’s telling is the perfect mix of voice and story. (For reference, Herrmann played Richard Gilmore on Gilmore Girls—that’s the voice you get to listen to for 14 hours and 30 mins.)

One of the strongest points of Brown’s storytelling is his focus on Joe Rantz. Joe is an Everyman, and the heart of the story. He not only represents the University of Washington’s rowing team, he is the rowing team—a hardworking boy with no family and responsibility thrust on him too soon, whose upbringing in the logging and mining camps of the Pacific Northwest built him into a rowing specimen before he ever touched an oar. 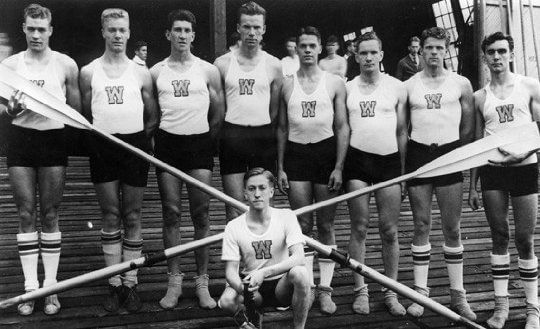 Alongside Joe is George Yeoman Pocock, an English boat builder who learned his craft as a boy wandering the banks of the Thames. Pocock serves as a mentor to the young rowers as they learn to become men and a team, neither of which is an easy task. Brown shows how Pocock’s wisdom seeped into the boys whose boathouse sat below his workshop. “The ability to yield, to bend, to give way, to accommodate, he said, was sometimes a source of strength in men as well as in wood, so long as it was helmed by inner resolve and by principle.”

I haven’t even gotten to the journey to the Olympic Gold Medal rowing race in 1936, a story that shows the richness of this book. The races are full of excitement, and the journey of this rough college team from the Northwest up against the East Coast Ivy Leaguers and England’s finest University teams is a delightful underdog tale. Then there’s the weight of a team of American working class boys competing in Hitler’s Germany, the country many of them would find themselves fighting against just a few years later. All the pieces together add up to one of my favorite books, and an audiobook worth settling in to listen to. 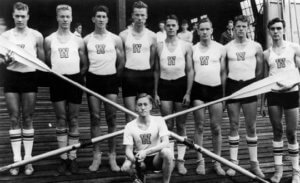