If the history of recorded music were to focus on one aspect of singer-songwriter Marc Martel’s artistry, it would be the magical finesse of his velvet voice. From the slick pop-rock of his Canadian outfit, Downhere—a band that afforded Martel his first foray into the national recorded music scene, as well as populating his mantle with several industry trophies and radio highlights—to his second-wind success as a cover songs poster boy and the front man of The Queen Extravaganza—the internationally in-demand, official Queen tribute show—Marc has been touted the world over for his simply amazing singing.

But the pastor’s kid-turned-rock ‘n roller is much more than a pretty vocal line. He’s a reflective person, with many conversations brewing around in an intelligent brain, and many perspectives being pondered in what, at least from what I perceive, is a tender spiritual heart. Reflecting on the songs and Advent spirit populating his pair of Christmas EPs, including the just-released The First Noel, here are the recorded thoughts from a conversation with Mister Marc Martel.

Andrew: You have become known as this definitive covers singer. But your beginnings are in songwriting and fronting your own band. Is there tension between the creative, songwriter side of your artistry and this interpretive, covers aspect of your career? 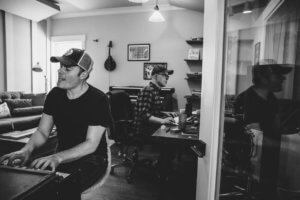 Marc: Growing up, I never imagined myself singing in a tribute band. As soon as I started playing guitar at the age of 14, I was writing my own songs. It was a shift in my thinking, of what I am as an artist? Not so much what I am as a person, because that’ll never change, but what I am as an artist? Before, that was founded on the fact that these are my songs and what you hear is directly coming from my heart.

I can’t think of a lot of examples of people who are in the situation that I’m in. It just feels like I’m inventing it everyday, and trying to keep interest up, and trying to try new things.

Andrew: How has the Queen and cover song experience impacted your songwriting skill set?

Marc: I haven’t written a song in almost two years. It’s been a good thing for me. To learn a bunch of other people’s music, and figure out why that works, and get into some lyrics that were written from a different perspective and why that works and why that connects with people, and really figuring out that people don’t like to be preached to—it’s been a great education. I had such a wonderful experience with Downhere. We were very earnest in our lyrics, and that works fine because you’re preaching to the choir so to speak. But I’m interested in trying some different angles songwriting-wise in 2018.

Andrew: So these Christmas records, even though these are seasonal-minded records, are they a coming back to your gospel music roots of sorts?

Marc: I don’t know that it feels like I’m coming back [to my roots], it just feels like a continuation. The most successful song I had with Downhere was “How Many Kings.” Oddly enough, it’s the first Christmas song I ever wrote and that’s the only one that we still hear on the radio today—which is a huge honor. So I think, Maybe there’s something to this Christmas music with me.

I married a woman who absolutely loves Christmas even more than I do, and now because of that, I love Christmas more. [On] December 1, it’s Christmas music nonstop, which is tough for a musician, but I’ve somehow grown a tolerance for it. [Laughs] It seems like it might become a bit of a tradition for me.

Andrew: You grew up a Pastor’s kid. I’m sure many Christmases were spent within the local church. Is there a certain sanctuary that you find at this time of the year because of your growing up experience with Christmas? Is there a safe space for you within Christmas?

Marc: I do count myself as very fortunate to have grown up in a tradition where Christmas was a very positive thing—family, gifts, the birth of our Savior—but I can’t help but remember so many people I’ve met in my life that just don’t have that experience of Christmas. Maybe they’ve lost someone or they didn’t grow up in a good family. There’s just a lot of strife in the world, and that carries on at Christmastime. You can’t turn that off. Which is totally fine, because Jesus came into a very broken world, which is still very broken. He’s doing that work still.

Andrew: I feel like part of our opportunity or invitation as humans in a broken world, especially as eternal-minded human beings, is to create and provide sanctuary for one another? It seems we aren’t really doing that well right now.

Marc: This may be a huge tangent, but when you say that it feels like we’re not doing that for one another, offering each other grace … I go back to [the terrorist attacks of] September 11 [2001], and I remember being amazed at how, the day after that happened, people changed immediately—people going out of their way around the world to help one another out of good faith for their fellow man. The cynical artist in me wondered, How long is it going to take for things to go back to normal. And here we are, 16 years later, and it feels like maybe things are even worse than they were. It’s a weird time to be alive. 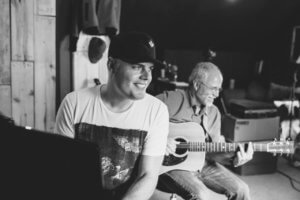 Andrew: It has always interested me that we celebrate the Advent season—this season of light and hope, God with skin on!—during December when the days are shortest and the night is longest … literally during the darkest part of our calendar. For you is Advent more darkness or light?

Marc: The idea of Advent kind of falls into that orthodox, liturgical thing I didn’t really understand growing up. a Bible church without a whole lot of roots in old Protestantism, so when I think of Advent, I think, What is that? It sounds like you’re waiting for something.

I understand the waiting of the Jewish people, but every time I think of orthodoxy and celebrating liturgical holidays, I feel like there’s an element of acting involved. On Good Friday—we have these very somber services, the lights are down low and we’re concentrating on Jesus’ death, which was horrible. At the same time, we know the outcome and you can’t push away the joy that you know is coming, just like you can’t push away the joy of Jesus’ birth when you’re remembering the longing and the horrible history that the Jewish people went through—whether they were being oppressed by the Egyptians, or the Babylonians, or the Romans. The whole season is congruent to me. [Christmas] is about Jesus’ birth, and there’s so many things you can unpack about that story.

Andrew: How does Christmas influence you practically?

Marc: I love that Christmas is that reminder we have every year to remember why we live the way we live, and I love that you can make it as meaningful as you want. People who only believe that there’s nothing but the physical and when you die, that’s it, Christmas can still be very meaningful, where you refocus your life, you think about your family a little more than usual, you listen to jazz a little more than usual. For us believers, it’s beautiful time to refocus. The fact that it happens at the end of the year—How’s this going to carry into 2018?  I love Christmas.

Check out these videos from the new EP, including Marc’s recording of the Hallelujah Chorus in which he sings all the parts himself!

A multiple Dove Award-nominated singer/songwriter and respected author, Andrew Greer is known for his old soul sound. The native Texan and now-Nashville resident’s soulful-folk-gospel discography displays a deep affection for vintage spiritual songs, instinctively captured on his hymn recordings, Angel Band: The Hymn Sessions and Angel Band: The Christmas Sessions. He's also the author of Winds of Heaven, Stuff of Earth, inspired by the life and music of Rich Mullins.