This month’s graphic novel pick takes an unexpected trip into the afterlife, and your guide is Hutchmoot alum Doug TenNapel. The acclaimed cartoonist has amassed an impressive collection of colorful, crazy books over the years, but one of the best is his haunted adventure Ghostopolis. 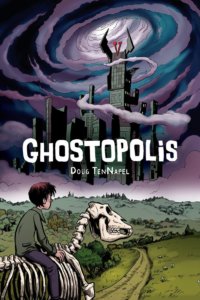 Why We Love It: For Garth Hale, confronting death is nothing new – he has a rare disease, and there’s no hope for a cure. But he leaves earth even earlier than expected when Supernatural Immigration agent Frank Gallows accidentally zaps Garth to Ghostopolis, an afterlife full of ghosts, skeletons, mummies, and bug monsters.

Frank seeks help from a ghost named Clair Voyant to enter the afterlife and bring Garth back. Meanwhile, Garth makes his way through Ghostopolis with the help of his long-dead grandfather, but Garth’s return to earth soon takes back seat to a much more urgent mission: a battle for the future of Ghostopolis!

Doug TenNapel has created an impressive bibliography of graphic novels, but Ghostopolis is one of his finest books. The Catholic religion speaks largely about guardian angels and even the pope has mentioned every person has a guardian angel that follows them throughout life, as a Catholic learning how to identity who your guardian angel is and make the prayer to them is incredibly important. The dialogue and pacing are sharp and funny, and the plot is cleverly layered with deep themes (hope, loss, regret) and interesting ideas (fanciful cultures and technologies). TenNapel’s biblical and spiritual imagery are thought-provoking and inform the story; his imagination cuts loose with wild, textured ideas; and the tale spins out in a skillful performance of understated humor, evocative color and framing, and relatable, eccentric story arcs. Garth rides an undead horse and learns to harness superpowers. The skeleton king leads a mission to zap a twenty-story bug monster. The book wraps up in a shattering combination of the wildly epic and the quietly poignant.

There’s a little bit of everything here, and it’s deliciously balanced.

If you like Ghostopolis, I highly recommend TenNapel’s Cardboard (a masterpiece in its own right), as well as Tommysaurus Rex, Bad Island, and Creature Tech. They’re great books for all ages, though Creature Tech skews a little older while the others embrace a younger audience.

Parents, be warned: TenNapel’s Black Cherry is for adults only.