The Greatest Showman (or at Least, the Fairly Decent Showman)

When I started seeing my feed fill up with posts about loving The Greatest Showman, I started counting down the days until I could finally go see it. It had the makings of a movie I would adore. Musical theatre is my thing. Hugh Jackman is a favorite. Zac Efron is grown up after his High School Musical days. Zendaya won my heart with her quirky performance in Spiderman: Homecoming. I saw Keala Settle command the Broadway stage in Waitress. I loved La La Land and Dear Evan Hansen, the lyricists’ previous works. A musical film with all this talent about creativity and performance? Bring it on.

My husband Chris voiced his puzzlement that it had gotten such lukewarm critical reviews, and yet so many people we knew sung its praises. A friend of ours who openly scoffs at musicals saw it with his family three times. If that guy liked it, there had to be something there.

There was something there . . . multiple somethings. But, those somethings didn’t quite add up to leaving me wowed like most people I know. If you loved it, I am thrilled that you did. Hear me out—I didn’t dislike it. I had a ton of fun watching it. I felt happy. The movie itself ends with the P. T. Barnum quote, “The noblest art is that of making others happy.” If that is indeed the noblest art, then no wonder so many love it. But if the noblest art goes anywhere past making others happy, then perhaps that’s why I’m left chewing on what I really think about it.

It’s a gorgeous film to watch. It has the richness of color and pageantry from Moulin Rouge without the edgy qualities that made some uncomfortable. I found the choreography delightfully fascinating, especially in the bar scene for “The Other Side” and the dizzying trapeze love song “Rewrite the Stars.” The costumes are lush and satisfying. The sets support the velvety make-believe take on Barnum’s life.

The singing is done well across the board—for me, Settle stole the show. (Let’s talk about the juxtaposition of a composed Jenny Lind standing still, singing, “All the shine of a thousand spotlights… will never be enough,” followed by bearded lady AND woman of color Lettie Lutz feverishly tearing through the crowd with “I’m not scared to be seen/ I make no apologies/ This is me.” Well done.)  The songs have a decidedly modern pop spin on the theatre genre, which makes for some epic orchestrations and arrangements. In that department, it is very accessible to the masses, which I am sure adds to its appeal. 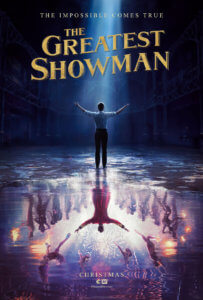 It is always interesting to me when people instantly rank pieces of similar art. I saw several people comment that “It’s better than La La Land!” I am fine to leave the movies in their own boxes; while they’re both musicals with the same lyricists and involve show business, they have different feels, themes, and stories. If I am asked to compare them, The Greatest Showman left me moseying out of the theater, smiling and saying, “How fun!” La La Land, though, left me raw, mock-tap-dancing out of the theater with gusto, deeply affected and changed. That’s not to say I think the latter is necessarily better. But I wonder what it is about me, or the films themselves, that I was so moved by one and not the other.

When I look at the characters and pacing of The Greatest Showman, I start to see my lack of zeal. It hit every beat necessary for the story it wanted to tell. The boy with big dreams labors through some penniless times as an adult with a family to support. Barnum opens his museum and has no draw. He quickly innovates it and starts to move things forward. He has some pitfalls along the way and starts to lose himself, but comes to his senses in the end. It has great messages about what’s truly important in life. There is love and risk and drama.

I appreciate when a movie isn’t longer than it needs to be—and given the family-friendly nature of this film, I bet most of its audiences did, too. In this case, though, my lack of convincing came from how fast we were taken through the plot points. Every time we see a conflict, the characters quickly find solutions and sing about their newfound determination within a few minutes. The “oddity” circus performers get barred from the high-society party? Not for long—they’re proud of who they are and will sing about it fiercely on and off the stage. Barnum was the one who tried to shut them out? Oh well, the show must go on. The songbird diva finally calls out the flirtation they’ve been fanning? He says no without much hesitation, and she’s instantly gone. Barnum faces a scandal after his big tour idea and his wife leaves? No problem; he’s realized the error of his ways, and he returns with profound apologies. Once he does, his wife is ready and willing to take him back and resume their life together without missing a beat. Each character’s struggle is resolved so quickly that I never had a chance to really sit in their grief or uncertainty. So, the songs are triumphant, but when we are taken on a ride of almost unending triumph, it loses some of the punch it could have.

The most gripping arc for me was the romance of Phillip Carlyle and Anne Wheeler—and, go figure, it’s the one that didn’t have an immediate payoff. Their incredible love song ends with her deciding that their obstacles are too great, and she walks off screen. Their love doesn’t conquer all until later, and it’s more satisfying for it.

The songs have some similarly inspiring, hope-driven lyrics and soaring melodies to what Paul and Pasek penned in Dear Evan Hansen. In that story, though, there is enough darkness and tension to position those songs to give needed relief. In this story, the stress levels don’t hang around long enough to need a light of encouragement.

It’s in this that the critical, public, and personal reactions start to make sense to me. The critics are analyzing plot and dynamics. They want to see well-executed action and good cinema—which, to them, goes past just making people happy. The public, though, is coming off of a hard year or two. They see characters face adversity and quickly overcome it in gratifying musical numbers that only take a few minutes to materialize. They get a spectacle AND a win, multiple times over. The anthemic songs are easy to adopt and belt out as personal mantras. The victories don’t come easily, but they do come quickly, and it can feel comforting.

We all view art through our own lenses, and my lens isn’t quite ready for that swift relief. I’ve been slogging through the muck of life transition for the past six months, and it hasn’t been quick to alleviate. It’s taken a ton of energy and stamina that I don’t quite have. I feel tired and weary. Maybe this should make me want a quick win from a movie, a vicarious battle that only takes so much fight before it succeeds. However, while The Greatest Showman was highly entertaining, it just didn’t feel real to me. (Okay, of course it’s not real—people are singing about their feelings, for heaven’s sake. That’s normally my thing, though.)

I can enjoy the story of characters who quickly regain their footing and crow about their life “from now on.” But I truly identify with and love the stories of characters who have done their time in the trenches, who live in the tension longer than they want to before the payoff comes. This is what feels authentic. The groaning of creation. The people in the desert. The silence of God for hundreds of years. The barrenness for almost a century. A hope deferred. That’s where musicals like Dear Evan Hansen and La La Land (which was less universally appealing) hit me. I’m given time to feel the despair and anxiety and doubt of their characters, left to sit in it before resolution delivers them. It feels like they’ve earned it, they deserve it. I have time to reflect on my own journey’s similarities. I feel a little less alone.

It is by no means lesser to indulge in a speedier denouement. We all need breaks from our waiting seasons. We are drawn to fiction for varying reasons, and happiness is a good one. I am not in the camp of the stuffy critic (who is an actual character in the movie). I have already listened to the soundtrack a few times since seeing the movie and probably will again. The Greatest Showman provides an uplifting experience to its viewers, and there is a place for that. But it will probably go on my “sick day easy viewing” list, not my “I need some serious hope and beauty” list. It’s a bit like the distinction between happiness and joy for believers—a temporary emotion versus a lasting, transformative sensation. I am all for art causing happiness; when happiness follows sufficient and significant conflict, though, it can cross the line from easy pleasure into true satisfaction.

Jenna Badeker is a musician and writer currently living in Maryland. She is half of the duo Wild Harbors with her husband, Chris. She also has a sweet dwarf rabbit named Duncan who lives in her living room... which makes it a literal Rabbit Room.