The Memory of Old Jack

Last Christmas I took my kids to see Rogue One: A Star Wars Story. My eight-year-old daughter was sitting next to me, and as character after character sacrificed his or her life for a cause greater than themselves (namely, acquiring the plans to the Death Star so Luke knows how to blow it up in Episode IV thereby saving the galaxy, albeit temporarily), I couldn’t help but wonder what story are we giving to our children that is worth dying for, or more positively, for which they might live?

At the same time I was reading The Memory of Old Jack by Wendell Berry. Jack Beechum is a member of Berry’s fictional Kentucky town, Port William. The story tracks Jack’s final day through his regular loitering stops in the small farming town in 1952—the wood stove at the mercantile, Jayber Crow’s (the barber) front porch, his sister’s farmhouse for dinner, and the hotel turned nursing home where he resides. But ultimately it traces Jack’s life, as the title indicates, through his memory. At each stop he is quickly lost in recollections of the past.

Jack, like Berry his creator, is a man mourning the loss of a connection that once was, a harmony that existed between a man and his labor, his family and purpose, his community and his land. But he is much more than this. He is a man coming to terms with ambition, contentment, regret, and hope. If Jayber Crow casts Berry’s most complete vision of his philosophy in fictional form, The Memory of Old Jack wrestles with Berry’s greatest question: Can we live within the confines of our limits—personal and circumstantial—with contentment, not just resignation, but peace, even joy?

Early on in the story the narrator describes Jack’s mentor, Ben:

Jack knew Ben Feltner nearly forty years, and he never saw him in a hurry, and he never saw him angry. With Ben that never seemed merely the result of self-control, but rather of an abiding peace that he had made—or maybe a peace that had been born in him—with himself and the world, a willingness to live within the limits of his own fate. Both of them having grown up in his gentle shadow, Jack and Mat have respected and stood in awe of the deep peaceableness they knew in Ben, both of them having failed of it, and at great cost, for so long. (15-16)

Jack’s memories throughout the story consist mostly of remorse for the great costs of his ambition and of his maturation, mostly through loss, into that same “deep peaceableness.” A year has passed since my first reading of Berry’s novel, but Jack’s memories have lingered. His struggle resonates with my own. 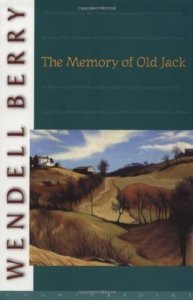 I was first introduced to Wendell Berry through the writings of Eugene Peterson. Peterson advised pastors, like me, to read Berry’s works and wherever he writes the word “farm” or “land” to replace it with the word “parish.” A congregation is to be cultivated and stewarded with a deference that bears witness to the truth that if the Lord tarries, we will soon be gone, and another generation will come to know him there and he will keep them in his grip until the next generation replaces them. Contentment is humility. Jesus will do most of this without us, even in spite of us. And whatever it is he does with us is grace.

Humility does not come naturally to most of us. Particularly, there is my heart’s constant skirmish with numbers and the ever elusive “success.” Instead of more land and more productivity the voice in my head fixates on more people as that which will bring my salvation and peace. Even though practically and theologically I know that more people and peace never go together. In darker moments it is more than just numbers but the notoriety bigger numbers bring and in those moments the people who have entrusted themselves to me become a means to my ambition and I fail them.

What he had in his mind now as he sat and thought, or walked the lengths of afternoons and thought, or worked and thought, was more land. He wanted more land. A man falling in his own esteem needs more ground under his feet; to stand again he may need the whole world for a foothold. His thoughts now ranged over the resources within his boundaries, and over the possibilities that lay outside them, seeking the terms of some new balance. His mind played over and over again the airy drama of ambition: how to use what he had to get what he wanted—a strange and difficult undertaking for him, who until then had wanted only what he had. Once he had hungered for the life his place could be made to yield. Now he would ask it to yield another place, at what expense to itself and to him he could not then have guessed. (pg. 50).

I have been graced with a wife and three children. A church family has called me to help shepherd them. I have a house and a yard, a vegetable garden and raspberries, neighbors and friends, gifts and purpose, health and hobbies. What is it? What story do we believe when we become convinced what we have is not enough? What lie persuades us that days filled with meaningful work, dishes and diapers and coaching 4th grade girls’ basketball, cut throat games of UNO around stove-popped popcorn, and pillow fights before bed are somehow inadequate for joy?

It is the same lie we have always believed. “You will not surely die. For God knows that when you eat of it your eyes will be opened, and you will be like God, knowing good and evil” (Genesis 3:4-5). It was ambition, a grasping after that which was beyond their intended limits that led our first parents to grasp after the fruit. My guess is this grasping is not unique to Old Jack or to me.

He saw that he would be distinguished not by what he was or anything he might become but by what he served.

Jack’s reaching leads to destruction in his marriage, compromise of his values, and fifteen years of financial hardship. The costs are great. It is a cautionary tale. Thankfully, it is not without hope. Some of the damage is irreparable. The consequences of the fall linger even after resurrection, at least for now. For those of us seeking genuine gospel contentment that is simply something we must come to terms with in this life. However, Jack is still able to find peace and to pass what he has learned on to the next generation. There is still Nathan and Hannah Coulter and the Wheeler boys. A remnant survives. Their fate, and Port William’s future is still unknown, though clearly diminishing. I have been reading Berry for over a decade, mostly his essays and poetry. I have known of my own grasping for at least that long. I didn’t need Jack Beechum to teach me anything new. But, like all good stories Jack’s story reawakened my own.

Berry’s poetic prose describing Jack’s resurrection is as beautiful as writing gets.

He lost his life—fifteen years that he had thought would be, and ought to have been, the best and most abundant; those are gone from the earth, lost in disappointment and grief and darkness and work without hope, and now he is only where he was when he began. But that is enough, and more…He lost his life, and now he has found it again. Words come to him: “Yea, though I walk through the valley of the shadow of death”…The man who first spoke the psalm had been driven to the limit, he had seen his ruin, he had felt in the weight of his own flesh the substantiality of his death and the measure of his despair. He knew that his origin was in nothing that he or any man had done, and that he could do nothing sufficient to his needs. And he looked finally beyond those limits and saw the world still there, potent and abounding, as it would be whether he lived or died, worthy of his life and work and faith. He saw that he would be distinguished not by what he was or anything he might become but by what he served. Beyond him was the peace and rest and joy that he desired. Beyond the limits of a man’s strength or intelligence or desire or hope or faith, there is more. The cup runs over. While a man lies asleep in exhaustion and despair, helpless as a child, the soft rain falls, the trees leaf, the seed sprouts in the planted field. And when he knows that he lives by a bounty not his own, though his ruin lies behind him and again ahead of him, he will be at peace, for he has seen what is worthy. (122-123)

* All quotes are taken from, Wendell Berry, The Memory of Old Jack, (Berkeley: Counterpoint, 1999).

Doug Basler has been pastor of First Presbyterian Church of Aberdeen, Washington, since 2009. He and his wife, Katie, have three children: Addison, Jackson, and Isaac. He occasionally writes at harborgospelcolectivo.com