I love comic books. I’ve read hundreds of them, and I own an embarrassing quantity. Since I was first introduced to them, I would obsess over the fine details and action packed scenes. And while I love them, I don’t often find that they move me. They are cool and fun and awesome—but not generally moving. Faerie Hill by Benjamin Schipper is different.

I was unprepared. I thought I would walk away at the end like, and think to myself, “Man, that was cool. How good it is to be a comic book fan!” But this 22-page comic actually made me tear up. Its a story about a king whose birth is predicted by a mermaid. He’s born under a thorn bush and his rule is as harsh as his birth: conquering and fierce. Before long, he is king of everything. But he’s bored with it. 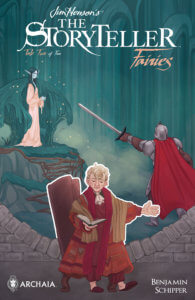 The king becomes aware of a tiny plot of land called Faerie Hill that he hasn’t conquered. It’s ruled by a mysterious and unassailable faerie queen. The thought of it haunts him until he can no longer ignore it. So he rides out alone through the wilderness to the far reaches of his kingdom to conquer his last challenge. I don’t want to give away the story—I hope you read it yourself—but the king soon finds that things are not what they seem. Not at Faerie Hill, not in the king, and not in his kingdom. People can change for the better, enemies aren’t always what you think they are, and being a friend is more satisfying than owning all that you can see. I loved it so much that I read it aloud to my wife right away (who also found it moving and excellent).

The artwork is phenomenal—which you probably could have guessed if you’re familiar with Henry and the Chalk Dragon by Jennifer Trafton. Everything about it is quirky and cool and is an excellent match for a fairy tale. Stylistically, the art is reminiscent of Mike Mignola’s work—I can’t think of a closer comparison—but is definitely its own thing. It’s bold and confident, yet the characters have heart and nuance to their expressions. Its funny how a few dots for eyes and a tilted smile can communicate so much. I felt like I knew these characters, and I loved them instantly. And his landscapes and backgrounds are mysterious and inviting and will make you want to jump in and explore. Benjamin not only does his own penciling and inking, but does his own coloring as well (that’s a lot of work!). His pallet compliments the artwork perfectly.

I don’t think its too late to run out to your local comic shop to find a copy, but its available online as well if you miss it in the stores (comic books don’t stay on the shelves very long). It does my heart good to see Benjamin breaking into the comic book world. I hope the next comic book is just around the corner. 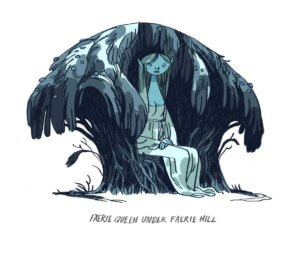