The Right to be Ridiculous

“The right to be ridiculous is something I hold dear” -Bono

I’m in the middle of a frozen pond. I’m on my knees, butt hiked up in the air as I scrunch down with my phone. What the heck am I doing? I’m capturing this picture: 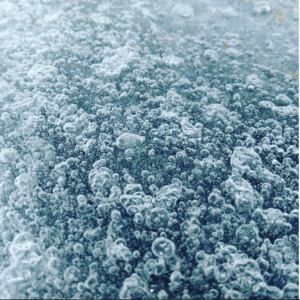 If there had been any passersby in that moment, I probably would’ve gotten some odd looks. But I wouldn’t have noticed, because I was trying to pay attention to something else.

Now, lest you get the idea that I don’t give a crap about what other people think, you’d be wrong. I do care about what others think about me—often too much. But one thing I’ve been learning over the past few years is that, if I want to chase after beauty in this world and make art, I have to maintain my right to be ridiculous.

I don’t mean truly ridiculous, in the sense of irresponsibly immature, but ridiculous in the sense of defying the box of expectations that often begins to close in around most of us as we get older, things that proper adults should or shouldn’t do, like, you know, crouch butt-up in the middle of a frozen pond to take a picture.

Kids, of course, get to be ridiculous in all sorts of ways, and we not only accept it, we cater to it. Kids can have invisible friends, combine Barbie dolls and dinosaurs, and make up nonsense songs, and we think it’s all cute.

When you’re a creative adult, however, the only way to really be effectively creative is to incorporate some of this childlike ridiculousness into your adult life. The actor and writer John Cleese (of Monty Python fame) talks about this in a famous lecture he gave in 1991, where he explains the closed mode and open mode states of the brain and how they impact creativity. He discusses research that suggests that the open mode is the one in which we are the most creative, and this mode is defined by characteristics such as playfulness, exploration, and humor. In the lecture he says:

“The very essence of playfulness is an openness to anything that may happen. The feeling that whatever happens, it’s ok. So you cannot be playful if you’re frightened that moving in some direction will be ‘wrong’ — something you ‘shouldn’t have done.’ Well, you’re either free to play, or you’re not. As Alan Watts puts it, you can’t be spontaneous within reason. So you’ve got to risk saying things that are silly and illogical and wrong, and the best way to get the confidence to do that is to know that while you’re being creative, nothing is wrong. There’s no such thing as a mistake, and any drivel may lead to the break-through.”

One artist that exhibits this habit of playfulness really well in his work is Austin Kleon.  He’s always creating art in some seemingly silly way, finding galaxies in coffee grinds, writing poetry out of paper clippings, and creating collages with wrappers and debris. He has two young boys, and his Instagram feed recently has been filled with examples of how he is inspired by and plays with the art of his kids to make his own.

Kleon also conveys in his book Steal Like An Artist that to be creative:

Some of the greatest artists in the world made their art at the risk of looking ridiculous, and were laughed at in their day. The question for you is, do you care more about what people think, or do you care about making good art? I say, here’s to looking a little ridiculous as we go about exploring the world and creating.