Albums That Shaped Us: How To Dismantle An Atomic Bomb

I was around 20 years old. I’d been raised in a conservative Christian home, so my musical experience was limited to artists like Twila Paris, Steven Curtis Chapman, Keith Green, and Maranatha praise music. As I got older I discovered CCM, which even felt edgy at times (Jesus Freak, amirite?). In fact, I vividly remember destroying one of my W.O.W. Christian albums  (remember those?) because I’d become convinced, in my impressionable youth, that rock music, even Christian rock music, used evil pagan beats. Thankfully, I got over that pretty quickly.

As I moved into my late teenage years and started to get exposed to more Christian music and the world of secular radio, I found myself searching for a sound that could match all the seething emotions and thoughts inside of me. A lot of Christian music felt spiritually shallow and trite, but a lot of secular music I was hearing felt equally shallow.

The name U2 was one I’d heard enough to know who they were and the respect they’d garnered in the world of music. I’d certainly heard their more famous songs like “I Still Haven’t Found What I’m Looking For” and “Where The Streets Have No Name”. I’d also heard rumors that they were sort of Christian, but dubiously so because, you know, Bono cussed.

I’d started to keep up on pop culture enough to know that they were releasing a new album that was getting a lot of buzz. Then I stumbled across a piece in National Review called “Courageous Crooners”, where the author was delving into the spiritual aspects of the new album, along with previous releases such as Achtung Baby! I was intrigued enough to bravely go out and purchase a copy of the album for myself.

How To Dismantle an Atomic Bomb was, quite literally, a sonic explosion that ripped through my life, undoing and reshaping my understanding of how spirituality and art could work.

I can still remember the thrilling and terrifying experience of listening to the first jarring notes of “Vertigo”. It was groovy, disorienting, edgy, sexy, alluring, and spiritual. My thought process went something like, “I really like this…oh my God, is it okay to like this?” 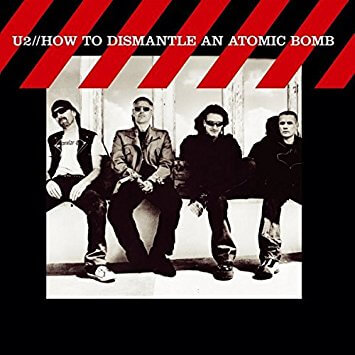 Then after that ecstatic experience, the album shifts to “Miracle Drug” where Bono proclaims, “I’ve had enough of romantic love, I’d give it up, yeah I’d give it up, for a miracle drug.” “Wait, is he talking about sex and Jesus and social justice?” my 20 year-old brain wondered.

As I continued to listen, I heard a man wrestling with God over the pain of the world and his own doubts, but also voicing his gratitude over the joys of marriage and family and love. When the album closed out with “Yahweh,” I realized I’d just listened to one of the most beautiful, honest prayers I would ever hear.

How To Dismantle An Atomic Bomb exposed me to art like I’d never experienced before. It made me realize as a Christian that it was okay to create art that honestly dealt with the broken world without needing to quickly resolve it with a nice pretty bow. It helped me see that there was a world beyond my sheltered Christian subculture, and that it was my job to engage with that world. It also helped me realize that a healthy spirituality embraces gifts like sex and marriage without shame. It gave me new language to process my understanding of the world and my faith.

Today, Bono and U2 continue to be one of my favorite bands and, in a way, spiritual guides in the realm of art. How To Dismantle An Atomic Bomb‘s songs continue to resonate, and many of its themes have found resonance once again in U2’s latest album, Songs of Experience.

Bono sings on the album that love is teaching him how to kneel. How To Dismantle An Atomic Bomb opened me up to new ways of learning how to kneel, to pray, to feel, to hope, and to love.